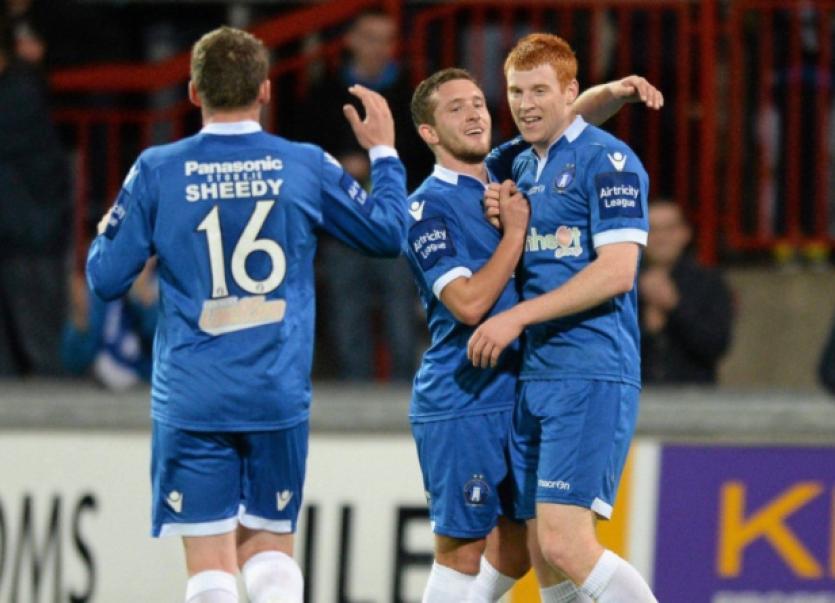 RORY Gaffney fired a stunning hat-trick as Limerick FC jumped up to seventh place in the Premier Division table, thanks to a 4-1 thumping of Bray Wanderers at Thomond Park.

RORY Gaffney fired a stunning hat-trick as Limerick FC jumped up to seventh place in the Premier Division table, thanks to a 4-1 thumping of Bray Wanderers at Thomond Park.

The victory, achieved before 715 supporters, leaves Limerick sitting in a far more comfortable position in the top flight table.

Bray, who had lost seven games on the bounce before drawing 1-1 with basement side Athlone Town last weekend, played the last 20 minutes of their Thomond Park visit with 10 players after David Scully was dismissed for picking up two yellow cards.

Limerick made one change from the side which thumped the Hoops with Prince Agyemang coming into the starting line-up for the injured Shane Duggan.

There was a huge let-off for Limerick in the 28th minute as Bray came oh so close to taking the lead. A free kick from the visitors Eric McGill from just outside the penalty area took a deflection, before cannoning against an upright. Alert Lims’ keeper Barry Ryan did well to gather the rebound before the in-rushing Adam Mitchell.

Crucially, Limerick FC went in front out of nothing. The influential Lee J Lynch picked out the overlapping Robbie Williams and the full-back produced a terrific cross which was athletically headed home by Rory Gaffney. The goal provided further evidence of the importance of keeping the striker at Limerick after a number of clubs had expressed an interest in signing him through the recent transfer window.

That goal finally sparked the Blues to life and they enjoyed the upperhand through the remainder of the half.

Limerick started the second half far more impressively and Lee J Lynch saw his well-struck shot deflected out for a corner on 53 minutes.

Bray’s hopes of drawing level suffered a major blow on the hour mark after David Scully was sent off, having picked up his second yellow card. The latest booking was picked up after referee Graham Kelly ruled he had taken a dive inside the Blues penalty area.

Limerick FC may their numerical advantage tell in the 70th minute when netting a second goal. Gaffney this time turned provider setting up local boy Lee J Lynch who showed terrific composure to cut inside a Bray defender before finishing superbly to the net.

But Limerick’s two-goal lead was short-lived as Dean Zambra netted for the visitors a minute later, firing home after Graham Kelly’s free-kick was parried by Barry Ryan.

Limerick FC introduced Shane O’Connor as a replacement and he provided a valuable attacking outlet down the left. Gaffney was denied his second goal of the night thanks to a smart save from Bray keeper McGuinness.

The home side wrapped up the victory on 83 minutes when Gaffney seized on a Jason Hughes header, before smashing a terrific left foot shot in the bottom corner of the net.

And for good measure, Gaffney was on hand to bag his hat-trick in added time when he slid home from Ian Turner’s cross.