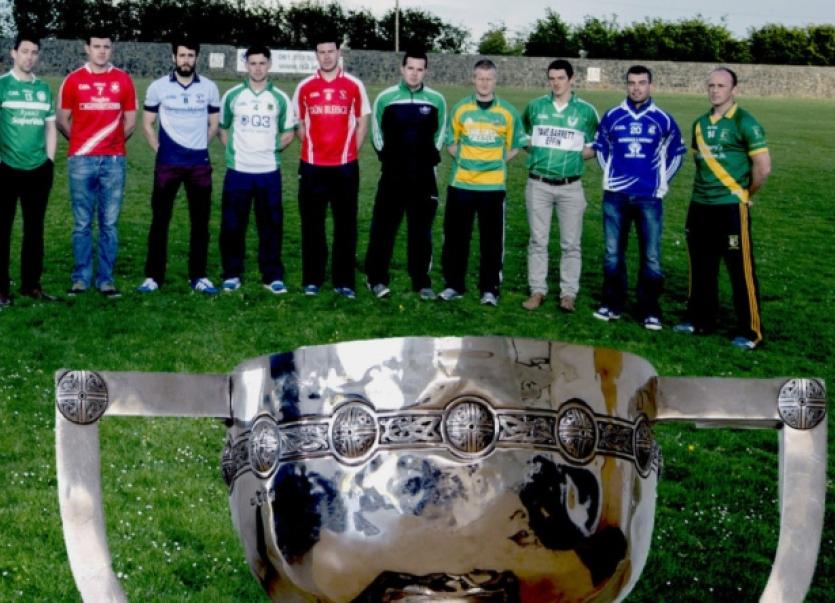 THERE are six games in round one of the group stages of the Limerick SHC this weekend.

THERE are six games in round one of the group stages of the Limerick SHC this weekend.

THE champions open the championship and will be mindful that Na Piarsaigh were beaten in their first game of their title defence last year.

It can’t be easy for Kilmallock to refocus just six weeks after Croke Park. But then again they may enjoy the opportunity to get that display out of their system.

Kilmallock report a clean bill of health and operate from the same panel as last season and with the same management. However, players like John Meade, Kevin O’Mahony, Paddy O’Loughlin and Robbie Hanley will be pushing to get regular starting roles as the year progresses.

Ahane will without the suspended Mike Carr.

Under new management, Ahane will know that victory would be a huge statement, while also realising that Thursday probably won’t define their season.

Ballylanders were shocked in their title defence in the football championship but Kilmallock should carry too much power for what will be an Ahane team, sprinkled with youth.

A repeat of the recent county U-21 final, where Na Piarsaigh were emphatic winners.

The last meeting in senior championship was in 2013 when Doon were winners, although Na Piarsaigh ended the year as champions.

Both have strength in depth and forwards that can and therefore among the contenders for the crown.

Hurling fans will hope to see Kevin Downes at some point to kick-start his season after a knee injury. Na Piarsaigh will be without the US bound Alan Dempsey later in the Summer but look close to full strength at present with options aplenty.

Doon also have options with Mike McKenna and Seamus Barry back after being absent for much of last year. Darragh Stapleton is another in contention.

NO strangers in the east division but county championship encounters aren’t plentiful.

They met in the 2012 County Cup and South Liberties were victorious.

For both sides this is a must-win game to set up their season.

South Liberties will be without Shane O’Neill (broken finger) while Anthony Owens (transferred to Kilkenny) and Mark Keane (not available) are crucial absentees from their attack of recent years.

That will see the likes of David O’Neill, Barry Nash and William Hickey as the forward leaders.

Indeed filling the centre back slot will also be crucial as Shane O’Neill was a real inspiration in that role for the last number of years.

Murroe-Boher will hope that Seanie Tobin carries his Limerick form back to the club and that could provide the spark they need.

Much attention will focus on whether Seamus Hickey lines out after his recent lay-off with a hamstring injury picked up in Croke Park against Dublin.

These sides didn’t meet last year in the championship but did clash in the 2013 quarter final when Ballybrown pushed Adare until the final quarter.

But Ballybrown never built on the positives of that display last season when they were totally consistent.

They again changed management for 2015 with former Munster club winner Eoin Brislane of Toomevara at the helm.

The club field three adult teams but getting the best mix for their flagship team is the quest and to alleviate some of the scoring pressure from Alan O’Connor.

Adare waited until late in the season to appoint Ger Hegarty as new manager, a third in three years.

He won’t have had long to work with his new charges but does have quality up the middle and younger options, many of whom were introduced over the last two years.

A repeat of the county Premier IHC of last year.

Bruff won that final and also were victorious when the south rivals met in the group stages.

Bobby O’Brien captained that winning side from wing back but is abroad at present so misses out.

Otherwise new manager Fergie O’Loughlin (brother of Kilmallock manager) selects from a full panel, many of who had a big win in the Limerick IFC last weekend.

Croom did appoint former Antrim hurling manager Dinny Cahill earlier in the year but that didn’t work out and now former goalkeeper (and outfield player) John Cahill is leading the way as manager.

He could be without some experience with Peter Lawlor and Stephen Lucey carrying knocks. But Cormac Behan is back in the country and an asset to their side.

THIS is a repeat of last October’s County Cup final, which Patrickswell won.

But Effin will be hoping to repeat their success over ‘The Well’ in the round one game of 2012.

Both are under new managements for 2015 but it looks like Ciaran Carey will select from a full hand, while Richard O’Neill will be down key men.

Nickie Quaid (injured) and John Dillon (retired) are big leaders to be planning without for Effin.

Two players that have filled central positions on their rise from the junior ranks all the way up.

Patrickswell meanwhile, have Barry and Eoin Foley back in the panel this season to add experience and bolster their options.

All three of their county men Thomas and Seanie O’Brien and Cian Lynch have shown good form and the positions each are given at club level will be interesting.

Overall it just appears that Patrickswell should have too much strength in depth and forward power.