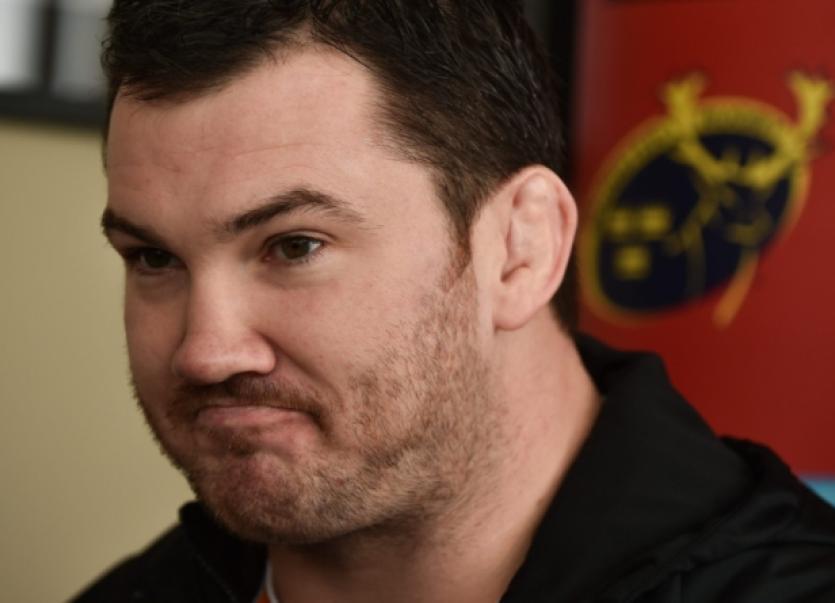 MUNSTER and Ireland hooker Damien Varley has today confirmed that he is to retire from rugby due to a foot injury.

MUNSTER and Ireland hooker Damien Varley has today confirmed that he is to retire from rugby due to a foot injury.

Thirty one-year-old Varley has been forced to call time on his playing career to a left foot injury he sustained at a training session in July 2013.

Following ongoing rehabilitation the hooker made his one and only appearance of the season as a replacement against Leinster in October. But ongoing persistent symptoms restricted his ability to train and play further, and he required surgery later that month. In rehabbing the injury for the next three months, exhausting all possibilities, Varley met with the surgeon in January for a consultation and the Clare-man was advised to retire from rugby on medical grounds.

Varley said: “It is with great sadness that I have to announce my premature retirement. Like so many before me I will look back at my time in Munster with immense pride and fondness, not only for the sport, but for the people that I have played with, worked with and the friendships I have made.

“I am privileged to have represented my province and country and I am hugely thankful for all the memories, and for the support I have received throughout my career.

“Finally, I would like to thank my family, in particular my parents Jim and Mary and my brothers and sisters for their unwavering support over the years, they have been a constant source of encouragement and guidance.

“I would also like to mention Pat Chesser who opened the door for me first day when introducing me to London Wasps.”

While pursuing a career in rugby Damien made provisions for the future by continuing with his studies. He completed a degree in Biomedical engineering from the University of Limerick in 2007 and recently commenced studying for an MBA.

The hooker won three caps for Ireland and made 121 appearances for the province, scoring 12 tries.

Munster Head Coach Anthony Foley said, “Damien’s contribution to the squad was so much more than his rugby skill-set. He was a highly regarded and talented individual, and always led by example with his attitude, professionalism and work ethic on and off the field.

“We know it has been a long road for him with this injury and although we are losing a player of his calibre we recognise all that he has done for the province and we wish him every success for the future.”

As a club player, the Garryowen clubman featured twice for the province over a five-day period in May 2006, making his debut against Ospreys and coming on against Scarlets.

He moved to London in 2008 joining London Wasps before returning to Limerick at the start of the 2009/10 season, going on to play a key role in Munster’s successes over the years.

He started in Munster’s historic win over Australia in Thomond Park in November 2010 and was the starting hooker in the province’s Magners League winning Grand Final against Leinster in May 2011.

During the 2013/14 season he captained the side on 8 occasions, leading the side against Toulon when making his first Heineken Cup semi-final start in May 2014. He is one of 7 current squad members with over 100 caps for the province.

Varley first represented Ireland against Australia in June 2010, and his two other appearances were both against Argentina, with the most recent taking place in June 2014. He has 4 Ireland ‘A’ caps.

Also a keen musician he was known for his musical talents while singing on many a rugby tour, but the hooker shot to national fame when he performed ‘Lean On Me’ on RTE’s Brendan O’Connor show in October 2013, receiving widespread acclaim for his talents on and off the pitch.