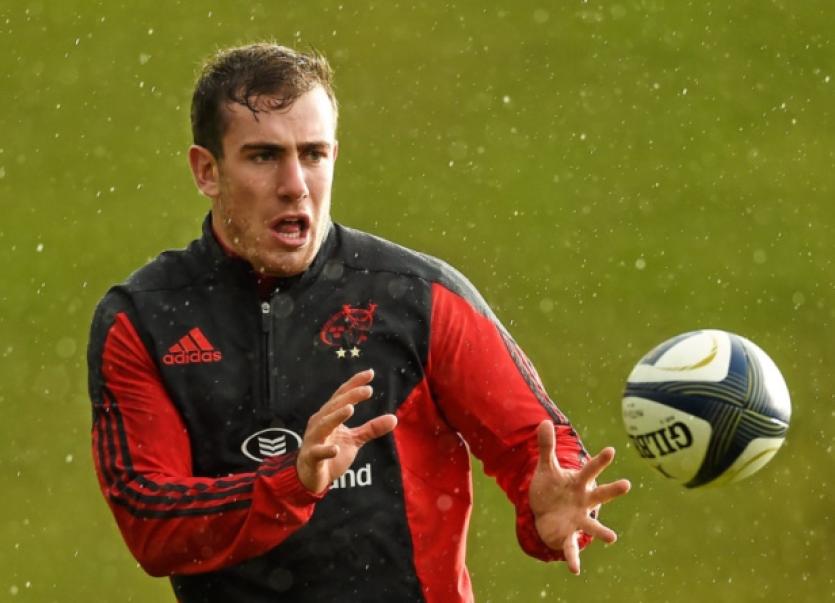 MUNSTER head coach Anthony Foley is hopeful that JJ Hanrahan will remain at the province next season, following speculation that the 22-year-old could be on his way to Northampton Saints.

MUNSTER head coach Anthony Foley is hopeful that JJ Hanrahan will remain at the province next season, following speculation that the 22-year-old could be on his way to Northampton Saints.

Utility back Hanrahan, out of contract with Munster at the end of the season, is reported to have been offered a deal worth €190,000 a year to join English Premiership giants Northampton.

Foley, who is preparing his side for Sunday’s crucial European Champions Cup return clash with Clermont Auvergne at Stade Marcel Michelin, said Munster had offered Hanrahan a new contract.

Foley said:”JJ (Hanrahan) is a young player we obviously have a lot of time for.

“We have looked after him very well in his preparation for this season. We have made sure that an injury he has been carrying for a couple of seasons we have helped him get rid of it, so he can become a better player.

“In terms of the load he can take during the week, the extra kicking and preparation he can do around his game, we allowed that. The consequence of doing that meant he started the season a month behind everyone else. He is playing a small bit of catch-up. He is not a million miles away. When he has come on in big games he has done a very big job for us. When we played him at full-back in two recent games, he looked dangerous back there. He is an incredible footballer and somebody we would like to keep.

“There are contract negotiations going on. It is unfortunate it is out in the press. You can go to any club in Ireland and there are fellas talking to other clubs, renegotiating. When most players go about the national contracts you see them over in Toulouse, Perpignan and in the old days, Biarritz. There would be fellas flying out and making sure they are seen elsewhere, It’s all part of it. You don’t want it out in the public that fellas are up for negotiations because with quality players like JJ, teams come around and they want him, so it is important for Munster to keep our own players coming through.”

Foley said that loosehead props Dave Kilcoyne (knee) and James Cronin (shoulder) had been scanned and assessed for their injuries by the specialist. Munster are awaiting a report back on the injuries.

Foley said: “It is never ideal to have two players in one position injured. Hopefully, we will get one of them back, maybe the two of them back. We are fortunate to have a Sunday fixture which gives us another day.”

Back-up options at loosehead include John Ryan and the versatile Eusebio Guinazu. Coach Foley said he hoped centre Andrew Smith would be able to take a full part in training on Friday.

Munster must end Clermont Auvergne’s 20-game winning run at home in the European Cup if Anthony Foley’s side is to get their campaign back on track this weekend.

Munster slipped to third place in Pool 1, a point adrift of leaders Clermont, following their first defeat to a French side at Thomond Park in the 19-year history of the European Cup on Saturday. It is now six years since Clermont Auvergne lost a home tie in the European Cup. Then it was English side, Sale Sharks, who inflicted a 32-15 defeat on Clermont in October 2008.