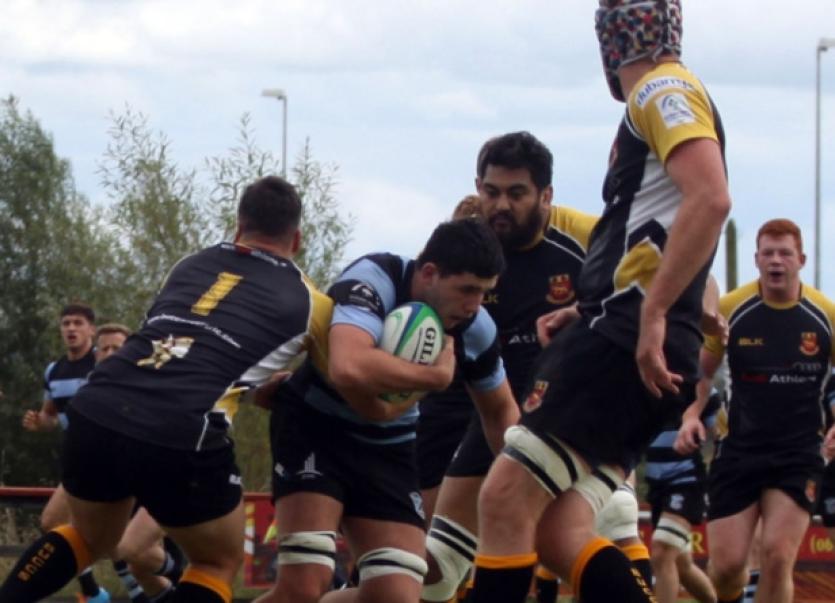 GARRYOWEN were the only Limerick side of the seven to see action this weekend to record a win in the Ulster Bank All-Ireland League.

GARRYOWEN were the only Limerick side of the seven to see action this weekend to record a win in the Ulster Bank All-Ireland League.

In Division 1A, Young Munster shipped six tries in a 42-0 thumping at the hands of Terenure College at Lakelands Park.

Tries from last season’s Division 1B Player of the Year Robert Duke (16 minutes) and winger Harry Moore (39) had the Dubliners 13-0 clear by half-time.

Play had to be held up for 30 minutes due to an injury to Young Munster number 8 Sean Rennison early in the second period. He was taken away by ambulance and is reportedly recovering well.

When the match got back underway, the points kept coming for the home side as Mark O’Neill’s second penalty was followed by a try from scrum half Kevin O’Neill off a five-metre scrum.

That was the bonus point safely locked away for James Blaney’s charges and centre Stephen O’Neill added the fifth try with 15 minutes left. Back rower Kyle McCoy got his name on the scoresheet in the 73rd minute, controlling the ball at the base of an advancing scrum to grab try number six which Stephen O’Neill converted.

Garryowen jumped ahead of fourth-placed UL-Bohemian in the 1B table, thanks to a 23-18 victory over Corinthians at Dooradoyle.

UL-Bohs suffered their first defeat of the campaign, a 13-10 reverse at the hands of table toppers Galwegians.

Third-placed Garryowen, who led 10-5 at half-time, and their visitors shared four tries evenly over the 80 minutes. Tight head prop JP Cooney and centre James McInerney touched down for Conan Doyle’s side, while out-half Jamie Gavin also made a key contribution with the boot - he accumulated 13 points, including three penalties, over the course of the game.

Next up for Garryowen is a long trip to Deramore Park to take on Belfast Harlequins on Saturday next.

The home side shot ahead thanks to a second-minute try from winger Matt Dever.

But UL-Bohs, hit back with a try from captain Ed Kelly via a tenth minute maul. It remained 7-7 up to half-time and while both sides were left to rue missed kicks, Ireland Under-20 international Ciaran Gaffney bravely took on the mantle of match winner with an 82nd minute drop goal.

Shannon are still looking for their first win in 1B after they lost 27-17 to Buccaneers at Coonagh.

When Tadgh Bennett stepped up to take a last minute penalty it seemed as if Shannon would grab a losing bonus point against the odds after being 5-27 in arrears after 52 minutes.

Bennett, who has won so many games for Shannon, failed on this occasion but there could be little doubt that the best team won.

Shannon also went close, twice, to getting what would have been a four-try bonus but their day was summed up early on when Greg O’Shea had a foot in touch when about to score his second try. Buccs’ led 20-5 at half time with O’Shea scoring Shannon’s try.

The Parish side rallied with a 57th minute try by John Shine and substitute Liam Cronin had another after 67 minutes but try as they might they could not manage another score.

In Division 2A, Thomond, who had opened their campaign with a bonus point victory over Queen’s University, suffered a hugely frustrating 8-6 away defeat to Nenagh Ormond on Friday night.

Thomond dominated possession for long stages, but two penalty goals from Ben Sergeant and a losing bonus point was all the Limerick side had to show from their industrious display.

It was also a disappointing day for the two Limerick sides in Division 2B as both shipped heavy defeats away from home, their second of the campaign in both cases.

Richmond succumbed 43-7 away to DLSP, while Old Crescent shipped a 30-13 defeat to Highfield at Woodleigh Park. The Cork side had a bonus point in the bag at half-time. Kevin Doyle scored a try for Old Crescent and Shane O’Brien kicked a conversion and two penalties.

Bruff’s scheduled game with Ards was postponed as a mark of respect to the late Alfie Laffan.

The prop wonMunster Senior Cup and Bateman All-Ireland Cup medals with the Kilballyowen Park side in 2011. Indeed, Bruff cancelled all club matches and training for the weekend as a mark of respect.