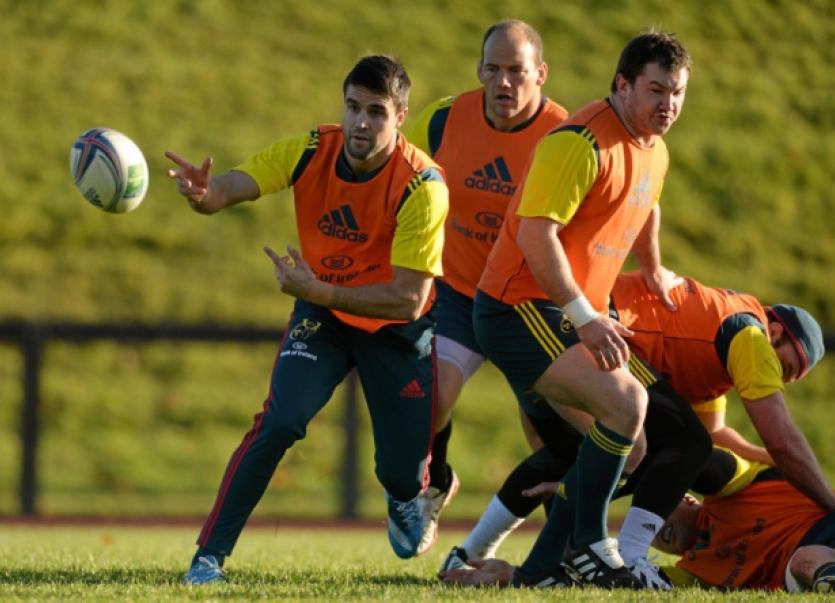 SCRUM-half Conor Murray is in line to make a dramatic return to action for Munster’s crucial Heineken Cup clash with Gloucester at Kingsholm on Saturday (6pm).

SCRUM-half Conor Murray is in line to make a dramatic return to action for Munster’s crucial Heineken Cup clash with Gloucester at Kingsholm on Saturday (6pm).

The return of the Ireland and Lions star to the Munster squad would come as a timely boost following the unfortunate knee injury sustained by Cathal Sheridan in Friday night’s PRO12 defeat to Ulster at Ravenhill. And Pool 6 Heineken Cup leaders Munster may also have winger Simon Zebo, who has been out of action since October after breaking a bone in his foot in the Heineken Cup defeat to Edinburgh, available for selection.

Conor Murray has not played for a month, after he sustained knee ligament damage in Munster’s home Heineken Cup win over Perpignan. Munster head coach, Penney said: “There is a chance (Murray will be involved v Gloucester). Always was. Hopefully, everything being equal, and the work that’s being done by a medical team behind the scene comes to fruition this week.”

Munster coach Rob Penney seems destined to be without scrum-half Sheridan, second-row Donncha O’Callaghan and hooker Damien Varley for the Gloucester tie due to injury.

While Shannon’s Duncan Casey impressed in Friday’s defeat to Ulster when introduced for the injured Varley, Munster may look at bringing into another hooker to their Heineken Cup squad prior to the final round games against Gloucester on Saturday and Edinburgh on Sunday week.