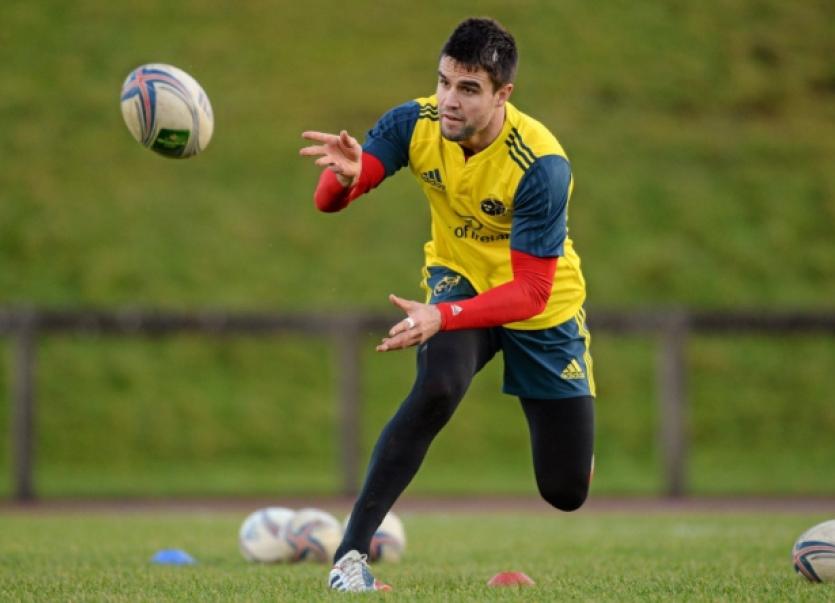 MUNSTER head coach Rob Penney will wait until after the squad’s training session tomorrow to decide whether to throw scrum-half Conor Murray and winger Simon Zebo straight back into the fray in Saturday’s crucial Heineken Cup clash away to Gloucester.

MUNSTER head coach Rob Penney will wait until after the squad’s training session tomorrow to decide whether to throw scrum-half Conor Murray and winger Simon Zebo straight back into the fray in Saturday’s crucial Heineken Cup clash away to Gloucester.

Murray and Zebo took a managed part in Munster’s squad session at UL yesterday and hopes are high the Lions stars will feature for the two-time Heineken Cup winners this weekend.

Murray has been sidelined for a month with a knee injury, while fellow Lion Zebo has been out of action since breaking a bone in a foot in October. Should Murray be passed fit to play in Saturday’s crunch tie at Kingsholm (6pm), it would be a huge boost to Munster as the province is set to be without another scrum-half, Cathal Sheridan for four to six weeks with knee medial ligament damage.

Munster coach Rob Penney said: “I’ve just got to give so much credit to our medical team and strength and conditioning team, who have worked really diligently with both Conor and Zeebs in particular. Conor trained in a managed way today, as did Zeebs and we’ll make a decision later in the week on their availability, depending on how they get through post-training recovery and what their bodies are like.”

Elsewhere, Damien Varley’s foot injury is not as bad as first feared and it is hoped he will train tomorrow, Thursday. The hooker will be given every chance to prove his fitness ahead of Saturday’s clash with Gloucester as will second row Donncha O’Callaghan, who is also in contention for selection despite suffering an injury against Ulster.

Out-half JJ Hanrahan is also available for selection and will be battling for the number ten jersey with Ian Keatley.

Pressed on how his contract talks with Munster are going, Penney again indicated his desire to remain on in the post after his current contract expires this summer. Penney said: “I’m keen to stay as I said before, the organisation has been top class to deal with. We’re focused on the footie at the moment Garrett (Fitzgerald)’s really appreciative of the fact that he doesn’t want to have a distraction. I’m not really interested in a distraction at the moment I’ve got something to focus on and we’ll just leave it at that to now, but it is progressing well and all parties are pretty comfortable at the moment.”

Penney said he hoped the services of Anthony Foley, Simon Mannix and Ian Costello - all out of contract this summer also - would be retained by Munster into next season.