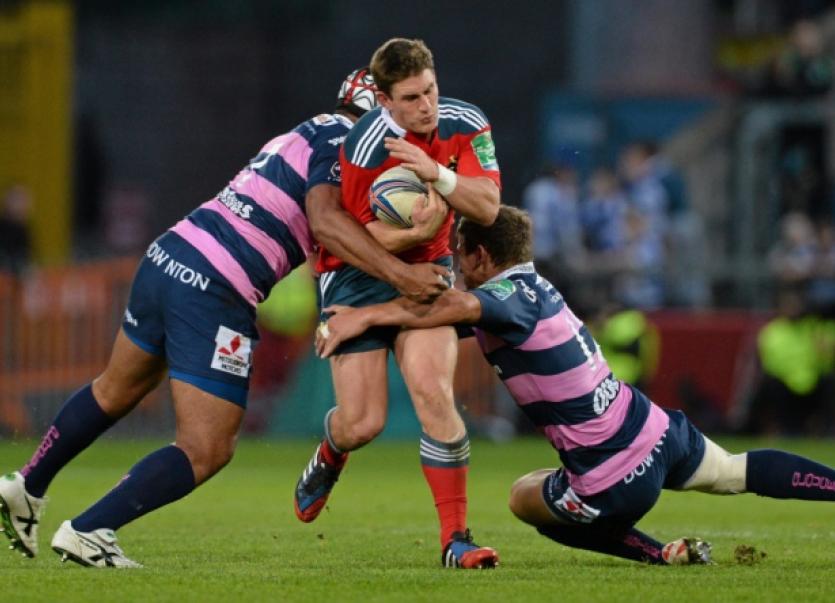 MUNSTER could never have envisaged in the dying moments of their round four Heineken Cup clash with Perpignan last month that the province would now be in such a strong position to make the knock-out stages of Europe’s premier club rugby competition for a 15th time.

MUNSTER could never have envisaged in the dying moments of their round four Heineken Cup clash with Perpignan last month that the province would now be in such a strong position to make the knock-out stages of Europe’s premier club rugby competition for a 15th time.

A combination of JJ Hanrahan’s twinkling feet which created an unlikely try to stun the locals at the Stade Aime Giral and Gloucester’s shock defeat at Kingsholm the following day leaves Munster sitting pretty at the top of Pool 6.

Rob Penney’s charges are five points clear of their Round 5 weekend opponents Gloucester and now as short as 1/80 to finish top of Pool 6.

Indeed Penney’s charges are odds-on 4/9 favourites to defeat the ‘cherry and whites’ at Kingsholm this weekend.

The reality for Munster is that this weekend’s away fixture against a Gloucester side bloodied and bruised from their home Aviva Premiership defeat at the hands of Saracens last weekend and Sunday week’s home tie with Edinburgh provides Munster with a fighting chance to secure a home quarter-final in April.

In order to give themselves a decent shot at securing a home quarter-final, Munster will probably need to take nine points and perhaps even 10 from their opening two fixtures.

A big ask, yes, but Munster are capable of achieving it.

BATTLE FOR THE 10 SHIRT

AMONG the key selection decisions facing Munster coach Rob Penney this week is whether Ian Keatley or JJ Hanrahan will fill the out-half berth at Kingsholm on Saturday.

Keatley would appear to be in the box seat to start this weekend, despite enduring a difficult night with his goal-kicking against Ulster in the PRO12 at Ravenhill. Keatley is the more experienced of the two at this level, and while a fit-again Hanrahan is putting serious pressure on the former Connacht fly-half for the starting berth, he is likely to have to be satisfied with a place on the bench.

MUNSTER captain Peter O’Mahony insisted this week that Gloucester’s 21-point hiding at the hands of Saracens at Kingsholm in the Aviva Premiership last weekend was the worst thing that could have happened Rob Penney’s charges ahead of this weekend’s fixture.

And while Gloucester are now languishing in a lowly ninth place in the Premiership table - with just four wins from 12 League fixtures - it is hard to imagine there won’t be a strong response from the ‘cherry and whites’ at teatime on Saturday.

It is hard to imagine the likes of Mike Tindall, Billy Twelvetrees, Jimmy Cowan, Ben Morgan and co not turning in a significantly improved showing this weekend.

MUNSTER will wait until later in the week before deciding whether Conor Murray and Simon Zebo will feature in the squad at Kingsholm on Saturday.

The vibes seem positive over their availability this week and there is no doubt the Lions duo bring an energy and enthusiasm to the squad that the remaining players thrive on.

Munster’s inclusion in the squad would be especially timely as the province confirmed this week that another scrum-half Cathal Sheridan will be sidelined for the next four to six weeks with a medial ligament knee injury.

Zebo has not played since breaking a bone in his foot in the opening round of the Heineken Cup away to Edinburgh in October. The winger has the ‘X Factor’, an uncanny ability to unlock opposing defences.

A fit-again Zebo would provide a welcome injection of firepower into the Munster backline.

KEITH Earls has been in sparkling form for Munster this season and having missed the PRO12 clash with Ulster last week due to a bruised shoulder, the in-form winger looks set to return to action this Saturday.

Earls has been hugely influential in each of Munster’s four pool fixtures to date.

The 26-year-old is sixth in the list of metres gained with ball in hand in the competition this season, with 294 metres to his credit. Earls is also sixth in the list of players who have been the most defenders - 13. Should Munster be able to call upon the services of both Zebo and Earls on the wings this weekend, they will boast a highly potent attack

WHILE the injuries suffered by both hooker Damien Varley and second row Donncha O’Callaghan in last Friday night’s defeat to Ulster in the PRO12 were not as bad as first feared and both players could well play some part this weekend, head coach Rob Penney will take great encouragement from the displays of the likes of Duncan Casey and Dave Foley when introduced at Ravenhill.

Casey’s line-out throwing was a revelation and while he may lack big game experience, he has showed an impressive temperament for big-game action when introduced in a number of recent high profile fixtures.

Dave Foley too has caught the eye with a number of impressive performances this season in the engine room and the Tipperary continues to mature as a player. Both Casey and Foley are clear examples of players who have benefitted from the squad rotation policy coach Penney has favoured this season.

Penney has been rewarded for placing his faith in youth with a string of fine performances from the younger brigade.

MUNSTER used their maul to terrific effect in their PRO12 inter-provincial clash with Ulster last time outing, gaining two tries directly from it and feeling thy had a strong case for a third try late on.

There is no doubt that Munster’s well-executed maul has served them very well over the years and Friday night’s clash in Ravenhill shows this facet of their forward play is in rude health.

The big question ahead of the trip to Kingsholm is whether Gloucester can up with a ploy to counter the Munster maul. It will be fascinating to see whether the ‘cherry and whites’ can manage it.

MUNSTER will be anxious that their shock opening round defeat doesn’t cost them the chance to secure home advantage for a now likely Heineken Cup quarter-final appearance in April.

Predicting how many points are needed to secure a top four ranking should carry a health warning, but nine from the last two fixtures seems like a minimum requirement.