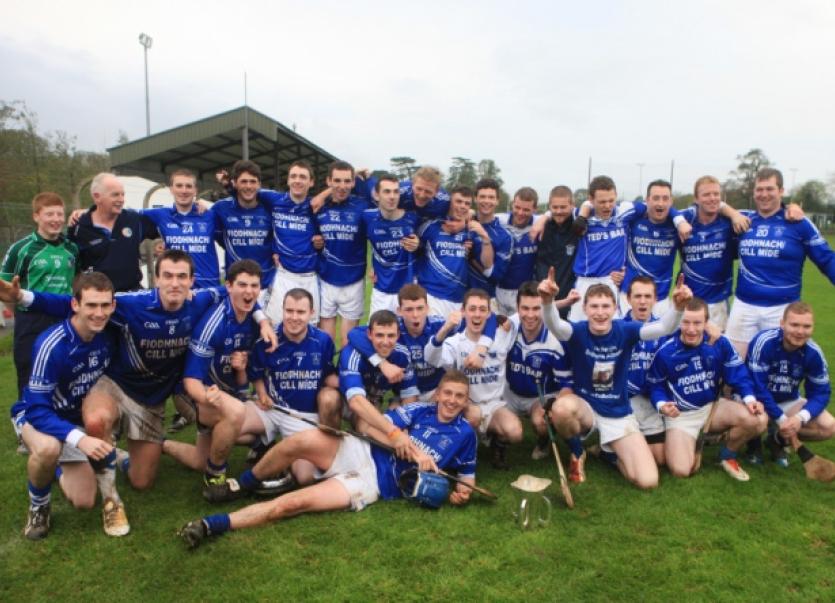 Six years of exile in hurling’s lower reaches ended for Feenagh-Kilmeedy in Newcastle West on Sunday when they when they had a 0-14 to 0-11 win over Feohanagh in Limerick junior A hurling final.

Six years of exile in hurling’s lower reaches ended for Feenagh-Kilmeedy in Newcastle West on Sunday when they when they had a 0-14 to 0-11 win over Feohanagh in Limerick junior A hurling final.

Reversing the outcome of the West decider, the winners made the most of the conditions to build up a half-time lead that their their neighbours threatened but never overcame in the tense closing minutes.

There may have been an element of fortune in that the wind tapered off after the break but, on a day that made scoring difficult, it was always going to be a case of taking whatever chances that arose.

Although it took them a while to get into their stride, Feenagh’s five points without reply in the minutes coming up to the interval gave them enough of a cushion to soak up whatever Feohanagh threw at them.

They also showed a greater sense of purpose throughout, never panicking even when Feohanagh kept them under almost constant siege in the latter stages. It wasn’t just down to the heroics of James O’Regan and Liam Murphy at the back. Diarmuid Coleman’s free-taking and John O’Gorman’s willingness to chase everything produced the scores on the occasional breakaway that moved the target that bit further down the track every time the Castlemahon club looked like building up a head of steam.

Feohanagh, who incidentally had accompanied Feenagh through the trapdoor from intermediate in 2007, had hoped for a greater return from their front men. But between the conditions and the collision of fixtures resulting from chasing an unprecedented county junior championship double, they never got the chance to outshine their markers.

Just four of their scores came from play as they relied heavily on Jamie Butler’s frees and only Mike Fitzgibbon’s ability to collect the puckout and the long delivery consistently troubled the opposing defence.

Still, they managed to maintain the suspense right to the end and, had they converted the only real goal chance of the game off an injury time 20 metre free, they might have escaped with an unlikely draw.

Fitzgibbon gave it everything but could not overcome the conviction of a Feenagh rearguard that was never going to release its grasp on the trophy.

Donal Harrold had Feenagh off the mark inside a minute and Ger O’Gorman and Coleman’s added to it as they made the most of the wind but the scoring machine sputtered after that as three frees drifted wide and attacks near the goals broke down. Unable to get any distance in the air and with ground hurling ineffective on the sticky surface, Feohanagh concentrated on slowing the game down and then chopped lumps out of their opponents’ early advantage when Butler’s free and Seán Flanagan found the target.

However, just as they looked like might draw level, Harrold lifted the Kilmeedy club’s midfield and O’Gorman started to run open the spaces. O’Gorman, Peter Irwin, Harrold and Jimmy O’Sullivan took the chances coming their way before Coleman’s free put his side 0-8 to 0-2 at the break.

His next free within seconds of the restart looked ominous but Jeff Reidy settled Feohanagh nerves. Pinning their opponents back into their own half, they then drew a pair of long frees for Butler to convert Curtin’s free stopped the gallop as did O’Sullivan after Barry Noonan replied. But while Mike Hayes and Butler’s free cut the gap further, Feohanagh failed to turn dominant possession into scoring momentum as O’Gorman brought the advantage out to four.

Feohanagh hopes grew when they ground closer with a pair of Butler frees but a Feenagh breakaway then delivered a Coleman free leaving Fitzgibbon with the chance of a draw off an injury time 20 metre free.

However, his effort was deflected over the crossbar and Coleman added insult to injury by punishing a foul with the last puck of the game.