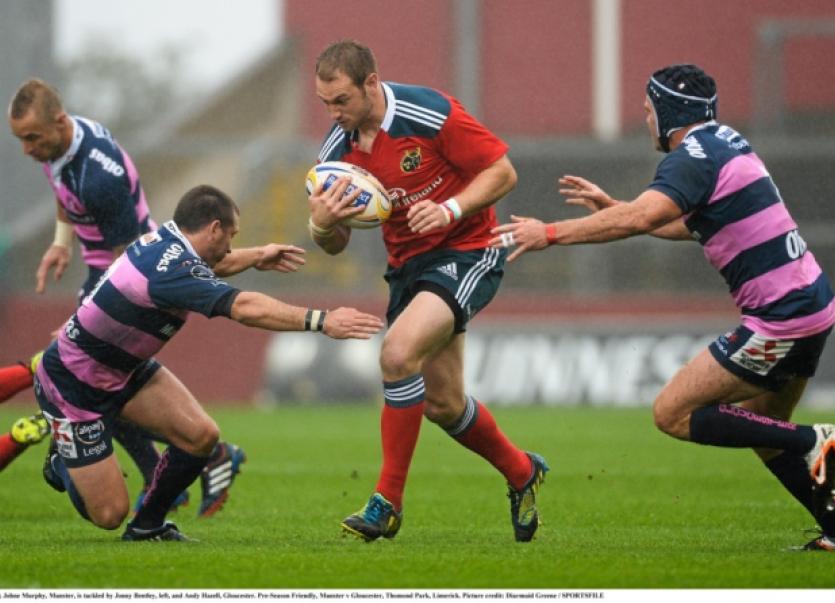 Colm Kinsella was in Thomond Park for Munster’s first game of the season against Gloucester. Here he rates how the players got on.

Colm Kinsella was in Thomond Park for Munster’s first game of the season against Gloucester. Here he rates how the players got on.

With Felix Jones currently sidelined with injury at present, Hurley can boost his cause for selection at full-back over the next few weeks. Made the most of his opportunity on a difficult wet night by scoring a fine first half try.

Former Leinster wing Conway marked his Munster debut by grabbing the home side’s first try when collecting Keatley’s crossfield kick. Denied a second try by excellent scramble defence. However, Conway’s debut lasted just 20 minutes after he was forced off with a dead leg

An eye-catching display from Laulala who carried the ball with menace all through. Laulala was hugely influential in the lead up to Conway’s early try. An in-form Laulala in early season augurs well for Munster

Great opportunity for Dineen to impress with James Downey currently on the injured list. Formed a solid centre partnership with Laulala and the combination are likely to get more game time over the next couple of weekends

Looked eager to get involved from the first whistle and no surprise given that Murphy only made eight appearances for Munster last season, largely due to injury. Unfortunate not to score an early try when Ian Keatley’s pass to the winger was judged to have been forward.

Keatley is currently in the box seat to replace the departed Ronan O’Gara at out-half. And the 26-year-old, who played 27 games last term, could be well pleased with his display in wet and greasy conditions. Showed admirable vision with pinpoint crossfield kick for Conway’s try.

With Conor Murray firmly established at first choice number nine, Williams and Cathal Sheridan are set to battle to become back-up to the Patrickswell man in the marquee club fixtures. On a damp, greasy evening Williams performed his duties competently.

Twenty two-year-old Cronin was making his first start for Munster on Saturday evening, having made his debut for the province in the PRO12 clash with Leinster in April. The loosehead prop can be pleased with how he scrummaged.

Difficult night for line-out throwing given the heavy mist which fell for much of the game. Sherry acquitted himself well and scrummaged impressively. First choice hooker at Munster for much of last season. Another big battle with Damien Varley for the number two jersey lies ahead.

Twenty five-year-old Ryan showed up well in a Munster front row which more than held its own in the scrum. Ryan made just one start for the province last season, but was sprung from the bench six times. The tighthead, who was on loan at London Irish at the start of last season, made his European debut against Racing Metro in Thomond Park last January.

The vastly experienced O’Callaghan put in a highly impressive shift before being replaced by Ian Nagle at half-time as coach Penney rang the changes. O’Callaghan’s experience will be key for Munster in the coming weeks as the side bids to make a winning start to the RaboDirect PRO12

Holland featured in all of Munster’s RaboDirect PRO12 games last season, starting in 14 and coming on as a replacement in eight more. He will be hoping to see plenty of game-time in the Munster engine room in the coming weeks, although competition for places here remains keen.

Despite having an injury-interrupted campaign last term, the dynamic South African back-row produced several moments of genuine quality. Showed up well again against Gloucester, scoring a try. Sure to challenge strongly for starting spot in the back-row for the marquee fixtures if he can stay fit and healthy.

Thirty year-old Ronan will be glad to have put last season behind him, where an unfortunate run of injuries limited his appearances for Munster to just seven. Ronan still has plenty to offer and will be looking to impress Rob Penney over the coming weeks with the PRO12 tie with Leinster and opening rounds of the Heineken Cup to come in October.

In the absence of Peter O’Mahony, Penney opted to hand the honour of leading the side out to the ever-dependable Coughlan. Put in another big shift in an impressive Munster back-row unit.

Came on for the injured Andrew Conway after 20 minutes and showed well. Enjoyed breakthrough season last term when scoring try on full debut against Newport Gwent Dragons. The Garryowen winger will be looking to get more game-time in the coming weeks.

In a battle with Duncan Williams for the back-up scrum half spot behind Conor Murray. Acquitted himself well in wet and greasy conditions. Speed and accuracy of pass was impressive.

The 22-year-old centre made his Munster debut last May when introduced as a replacement in the PRO12 tie with Zebre. Showed up well in Munster’s midfield against the Cherry and Whites at Thomond Park when replacing Laulala at half-time.

Casey has been rewarded with a series of impressive displays with a Munster development contract this season. The Shannon hooker is a good scrummager and boasts a high workrate around the field

Highfield clubman Ryan came on for John Ryan in the Munster front-row at half-time. Will benefit from the experience greatly

Hanrahan may be currently behind Ian Keatley in the pecking order to fill the number 10 jersey, but he did himself no harm at all with an impressive showing. The UL-Bohs clubman scored a smashing second half try after replacing Keatley at half-time.

This is a huge season for 24-year-old Nagle who first burst on the scene in Munster’s victory over Australia at Thomond Park in November 2010. Will be desperate to get more game-time this term having made eight appearances last term, partly due to injury.

Another Munster second-row who will be looking to impress in the season ahead. Twenty five-year-old Foley made 10 RaboDirect PRO12 appearances last season and seven more in the British and Irish Cup. Featured for the Emerging Ireland side in the IRB Tbilisi Cup in Georgia during the summer

The 21-year-old Garryowen flanker replaced Stander at half-time and showed up well. Featured for the Munster ‘A’ side in the B&I Cup last season and will looking to kick-on this term

Talented out-half who is behind Keatley and Hanrahan in the pecking order for the number 10 shirt. The 2012/13 Ulster Bank Young Player of the Year Award winner in Division 1A also impressed with the Munster A side in the B&I Cup last season.

Twenty six-year-old back-row O’Mahony made his Munster debut against Edinburgh in the PRO12 last September. Will be hoping to get more game time with the senior side this term, although the competition for places in the back-row is fierce.

Also used but not on long enough to be rated: