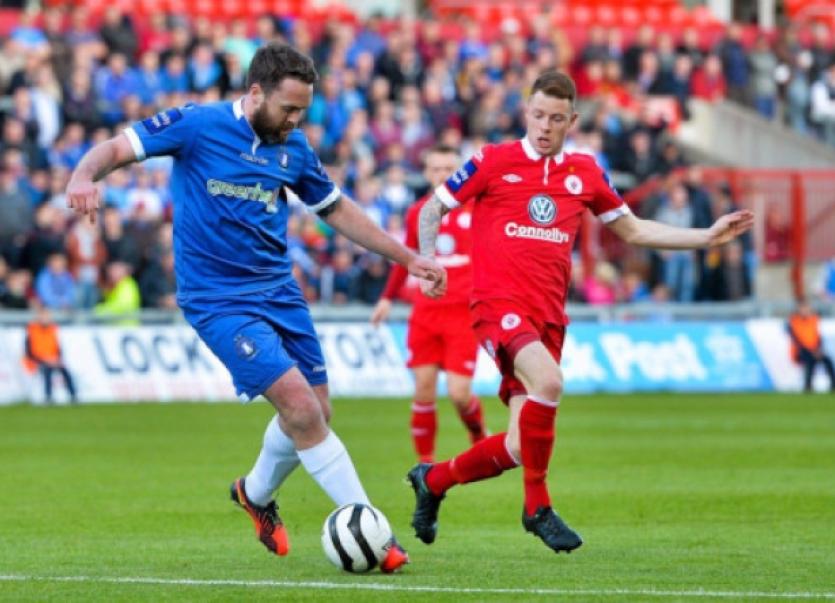 Limerick FC slumped to a 3-0 loss to league leaders St Patrick’s Athletic on Saturday evening but must re-group quickly ahead of Friday’s trip to face Shamrock Rovers in Tallaght Stadium.

Limerick FC slumped to a 3-0 loss to league leaders St Patrick’s Athletic on Saturday evening but must re-group quickly ahead of Friday’s trip to face Shamrock Rovers in Tallaght Stadium.

Killian Brennan capitalised on Stephen Folan’s mistake just before half time to open the scoring. The lead was doubled mid-way through the second half as Anthony Flood rounded Barry Ryan before slotting home. Jake Kelly rounded off the scoring in the closing stages to secure the win.

The home side had the first chance of the game courtesy of Ian Bermingham. When Kelly laid it into his path after a one-two, the full back lined up a shot which was parried by the composed Barry Ryan in the Limerick goal.

The young prospect Chris Forrester showed glimpses of his evident ability when he picked up the ball on twenty-five minutes. His seemingly effortless glide across the Richmond Park surface came to nothing in the end, as his shot only found the side netting.

Although the Shannonsiders’ pressing and tempo was impressive in the first forty-five, they really failed to find much penetration with Rory Gaffney constantly looking isolated up front by himself. With St. Pat’s also playing three midfielders, Limerick often had to look to the overlap for a route to goal. With Patrick Nzuzi evidently laboured from international duty and Robbie Williams struggling to deal with a knock, that particular option looked exhausted early into the game.

Just as it seemed like Limerick would keep it scoreless going into the break, Stephen Folan misjudged his pass-back. Christy Fagan ran in on goal before he was hindered by Barry Ryan’s tackle, but the second ball fell to Killian Brennan who shot home from twenty yards.

Limerick had a chance to level things just ten minutes into the second half when Dave O’Leary’s corner was cleared only as far as the back post. Rory Gaffney took the ball down on his chest, but his volley was high and wide.

Stuart Taylor’s men were made pay for their missed chance a minute later when Killian Brennan won possession from Shane Tracy in midfield. He released Anthony Flood on the right wing – the striker then took a touch past the out-rushing Ryan before slotting home calmly from a narrow angle.

St Pat’s almost put the tie to bed after seventy-five minutes when Conor Kenna looked destined to score from close range following a scramble in the box – thankfully for Limerick, Brian O’Callaghan was on hand to clear off the line

The home side did eventually add the third, albeit deep into stoppage time. A tired looking Limerick defence couldn’t cope with the quick-thinking substitute Sean Gannon. When he found space on the right, he looked up and found the run of Jake Kelly – the winger provided the easiest of finishes to seal what was an impressive win.