Munster blow as Zebo ruled out for 10 weeks 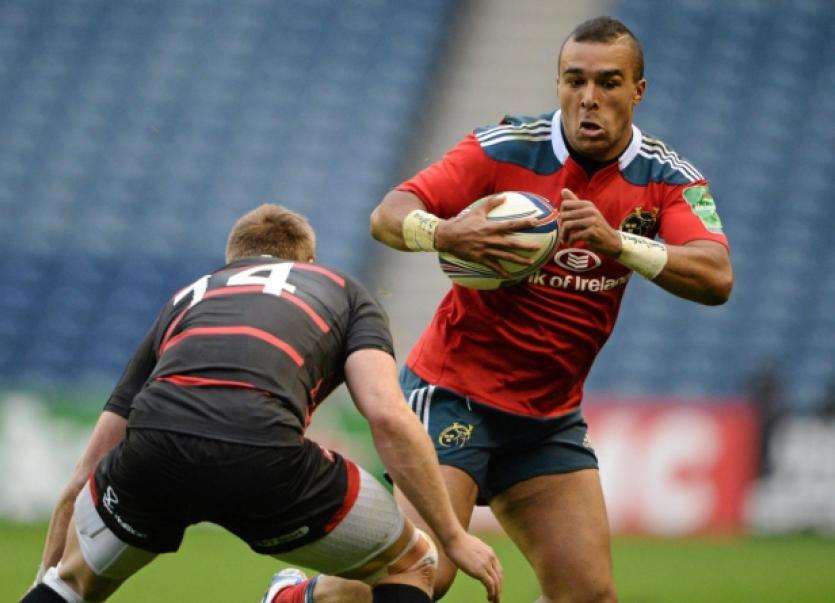 MUNSTER and Ireland have been dealt a major blow with confirmation that Lions winger Simon Zebo is set to be ruled out of action for up to 10 weeks with a foot injury.

MUNSTER and Ireland have been dealt a major blow with confirmation that Lions winger Simon Zebo is set to be ruled out of action for up to 10 weeks with a foot injury.

A scan carried out in Dublin yesterday confirmed that Zebo had suffered a crack to a bone in his left foot during Munster’s shock Heineken Cup defeat to Edinburgh on Saturday.

Munster Rugby confirmed last night that 23-year-old Zebo will continue to wear the medical boot he was issued post-match for the next four weeks and ‘will be side-lined for approximately ten weeks.’

Munster captain Peter O’Mahony is, however, set to return against Gloucester this weekend having missed the shock defeat to Edinburgh at Murrayfield.

Munster coach Rob Penney said he expected a major step up in performance levels from the players this weekend because of the pride the players feel in wearing the Munster jersey and the significance of the Heineken Cup to the province.

Penney said: “I have been in many teams where, for one reason or another, guys just don’t get up for the battle. 99% of the time all these guys love what they do. For some reason on Saturday it looked like there were a couple out there who didn’t quite have the passion and drive that the normally would have. Why that was who knows?

“We have dug deep into our coaching souls as a group and try to unearth anything that maybe we did behind the scenes that wasn’t conducive to being into a position to be able to play. There are probably a couple of things we will look to change if we have a 1.35pm kick-off again. But at the end of the day, these are a proud bunch of men and those sort of comments by me would reverberate around in their hearts in a way that won’t take much to motivate them.”

Head coach Penney revealed that he didn’t intend making ‘wholesale’ changes to the side for Saturday’s game.