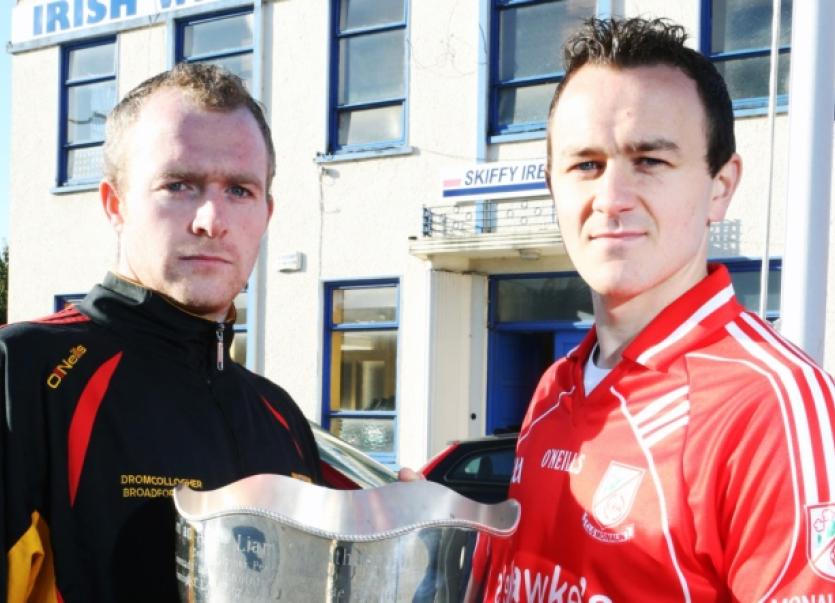 The duo have dominated the Limerick club football scene since 2000 but Sunday will be their first meeting with silverware on offer.

Indeed, 10 of the last 12 titles have shared between the duo - six to Dromcollogher-Broadford and four to Monaleen. On top of that, Drom-Broadford were beaten finalists in 2000 and 2007.

Of course there have been clashes between the standard bearers from the city and their western rivals.

Indeed since 2003, they have met nine times in the Limerick SFC.

Five of those meetings have been at the semi-final stage - Monaleen winning in 2005 and 2010.

In all four group games, victory has gone to the men in red, yellow and black.

The rivalry came to life, with three successive semi-final clashes in 2003-2005.

So on Sunday, many bragging rights will be on offer as well as the Fr Casey Cup.

And, the winner will represent Limerick in the Munster club with an away quarter final against Waterford champions, Ballinacourty or Stradbally on November 3.

Without doubt, Sunday’s finalists have been the two most impressive sides in the championship.

In six games Monaleen have scored 3-85 enroute to the final, while the champions have registered 8-70.

Clearly both have firepower but gaining the possession to feed the respective attacks could be the winning and losing of this final.

Drom-Broadford appear to hold the upperhand in this area and therefore Monaleen will need match winning displays from the likes of Brian Geary, Paul Kinnerk, and Padraig Quinn.

The Monaleen defence will also face their greatest task with Micheal Reidy and Ray Lynch now supplemented as score getters by the arrival of Killian Phair on top of Seanie Buckley, Micheal Brosnan and Derry McCarthy.

Monaleen will rely heavily on Ger Collins and Graham O’Connell for scores, unless Jason O’Brien or Mike Crowley can influence the contest with scores.

Overall, the champions look determined this season and Mike Fahy and Jerome Stack will be key to ensure that they don’t make the short trip to Newcastle West in vain.

Reducing the influence of Ger Collins would go a long way towards securing a seven Drom-Broadford title. Both Dee O’Leary or Gary Egan have performed man marking roles in the past and the outcome of this match-up would be key.

They met in the group stages last season with Drom-Broadford winning enroute to title glory. Monaleen’s last win was in 2010, with no 2011 clash.

The champions have a 100% record with Fr Caseys in round one the only side to get within a goal of them.

Monaleen are unbeaten but did have a draw with Pallasgreen.

The champions are 5/6 favourites to retain their crown, with Monaleen available at 5/4 to claim their fifth since 2002.