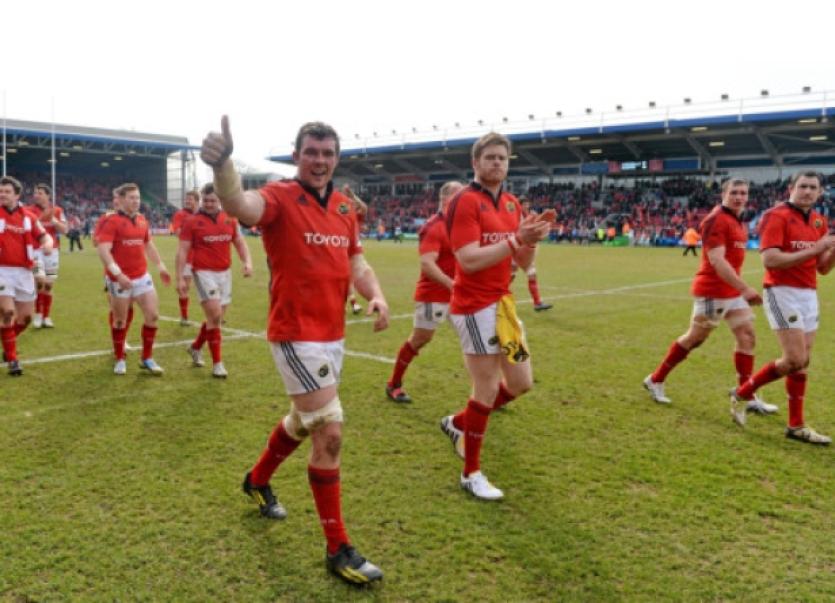 MUNSTER reached their 10th Heineken Cup semi-final, thanks to a remarkable 18-12 quarter-final victory over Harlequins at The Stoop on Sunday afternoon.

MUNSTER reached their 10th Heineken Cup semi-final, thanks to a remarkable 18-12 quarter-final victory over Harlequins at The Stoop on Sunday afternoon.

Just eight days on after conceding more than 50 points against Glasgow in a PRO12 drubbing in Scotland, Munster produced a devastating second half display to overpower a shell-shocked ‘Quins side in a pulsating contest played before a capacity attendance of 15,000.

No other team has won more away Heineken Cup quarter-finals than the Irish province and all the European experience proved vital as Munster improved their already impressive record against English opposition, which now stands at just 13 defeats in 39 fixtures.

Ronan O’Gara bagged all 18 of Munster’s points at the venue where he made his Heineken Cup debut some 16 years ago.

Man of the Match O’Connell was central to Munster’s resurgence, leading by example as the Munster pack got back to their grizzled best. The Limerickman now looks certain to selected to travel with the British and Irish Lions to Australia this summer and their watching coach Warren Gatland is sure to have the 33-year-old on his short-list of potential captains, four years after he skippered the tourists in South Africa,

Munster never allowed Harlequins get into their stride, the back row combining magnificently in their effectiveness around the pitch and the centre pairing of Casey Laulala and James Downey starring in defence and attack.

This display from Rob Penney’s men was as defiant and as ruthless as the Munster title-winning teams of old with the back-row of Peter O’Mahony, Tommy O’Donnell and James Coughlan working tirelessly.

‘Quins out-half Nick Evans gave his side a 6-0 lead in the opening quarter from penalties at scrum time. Evans landed a third penalty before the break, but O’Gara finally hit the mark with his third kick at goal and hauled the scoreline back to 9-6 at the break.

Munster took control at the start of the second half with some brilliant driving from their forwards as well as a dominant line-out that allowed O’Gara to hammer home four penalties in a 15 minute purple patch that not only saw them draw level, but build up a nine point lead at 18-9.

Evans grabbed a penalty back after 66 minutes to give his side a hope of snatching something out of the game, but Munster’s passion, pride and experienced carried them to another famous away day victory in the Heineken Cup.

Next up for Munster is a RaboDirect PRO12 clash with Leinster at Thomond Park this Saturday (6.30pm).