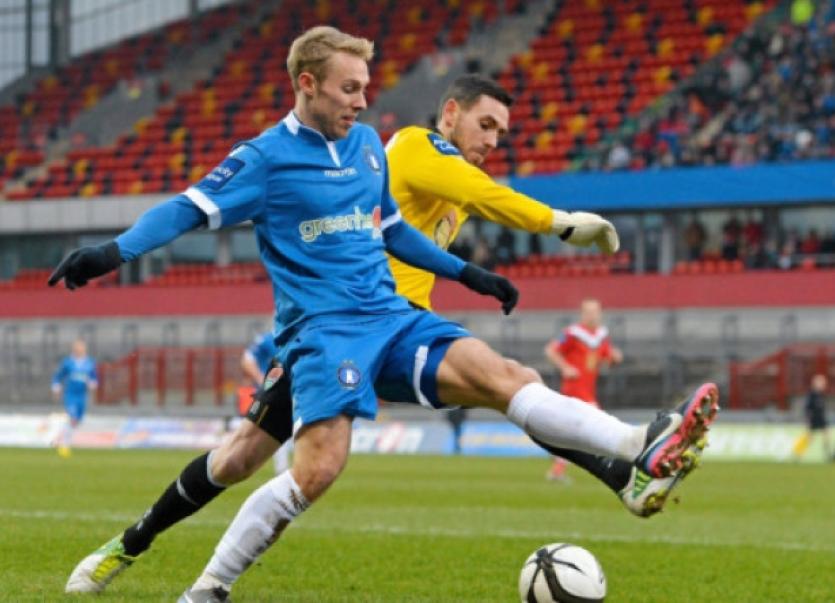 It is first versus third in the pick of this weekend’s round of matches. Limerick, sitting third after a fine start to their campaign, travel to defending champions and current table toppers, Sligo Rovers. The match kicks off at 7.45pm.

Excitement and enthusiasm in the Limerick camp is high right now, as they head into their biggest test of the season. “The boys are looking forward to the game. There is a lot of confidence about the dressing room, certainly a lot of positivity and the games cannot come quick enough, especially this one coming up,” said Blues boss Stuart Taylor ahead of the game.

Rory Gaffney and Jeffrey Judge are back in contention for selection after returning from injury and illness respectively. Aaron Browne and Axel Bossekota will miss the trip to the Showgrounds as they serve the last of the two match bans they received for straight reds in Drogheda last week. New local hero Darragh Rainsford will be pushing for a second consecutive start after bagging a brace on his full debut for Limerick FC in their 3-1 victory over UCD on Tuesday night. Dave O’Leary is definitely out as the club awaits the result of a scan on the knee he injured in the Tuesday night victory.

“It’s against the league leaders, the league holders, a fantastic side with a fantastic football pitch. The biggest thing for our players is to go and pass the ball, get on the ball and show what they can do. And they’ve got a pitch we can express ourselves on.

Taylor spoke of his admiration for Ian Barraclough and the job he has done turning Sligo Rovers into league champions and making them the team to beat once again this season.

“It’s an away game, we’ll look to go and stamp our philosophy on the game by passing the ball with the surface that it’s on. The boys will enjoy the game, it’s a good atmosphere with a good crowd and a nice stadium. I think it’s a good day out for our supporters as well, to go up there and see our boys play on a good surface.”

The travelling supporters will also get the chance to see Limerick native Lee Jay Lynch displaying his skills up close and personal. The Limerickman has made a big impression since joining the Sligo club and while the Blues fans are sure to acknowledge him, they will hope he chooses another night to shine.