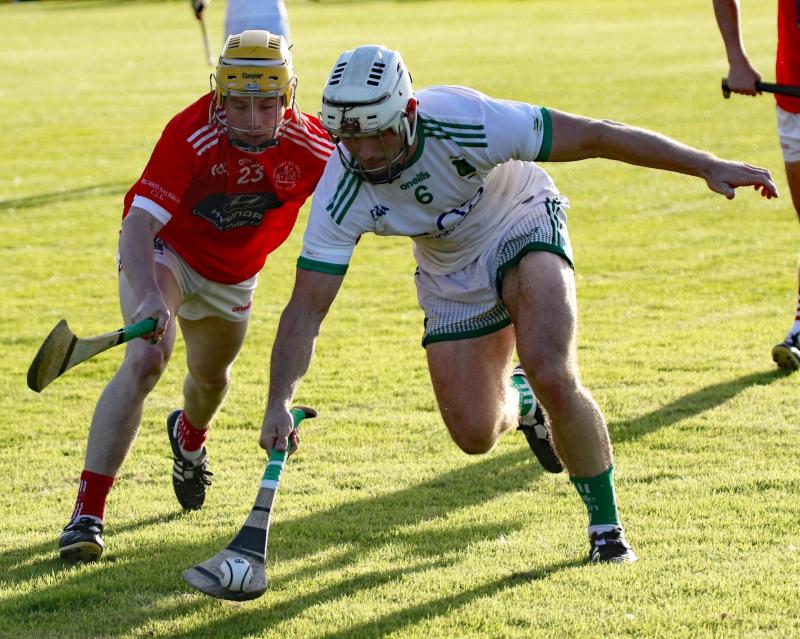 Ballybrown's Stevie O'Reilly looks to win possession ahead of Conor O'Halloran of Mungret during their Limerick SHC derby in Claughaun. PIC: Brendan Gleeson

BALLYBROWN made it two wins from two in group two of the Bon Secours Limerick senior club hurling championship with victory over neighbours Mungret.

Ballybrown had beaten Blackrock in round one, while newcomers Mungret overcame Kildimo-Pallaskenry.

Mungret could have had the perfect start had Cian Hedderman not blocked Brendan Giltenane and while Paul O'Brien sent over the '45', Josh Adams replied before Niall Mulcahy restored the Raheen side's lead. The end-to-end play continued as Adam's second was met by Brian Barry but as the scoring slowed down, Ballybrown took over in midfield and, after Aidan O'Connor equalised off a '65', Brian Griffin, Coughlan, O'Connor's free, Luke O'Connor's pair and Coughlan vaulted them into a six-point lead.

A run of wides halted their progress, Mungret availed of the easing pressure but Brian Barry's goal shot was stopped by Hedderman before a pair of O'Brien frees, the first met by Aidan O'Connor restored some momentum. But they failed to build on it as play moved into added time as Mark Sheehan, Luke O'Connor and Coughlan shot over, Adams caught high, rounded his marker and batted over the advancing Conor O'Brien to the net and Ross Kenny pointed to leave the Clarina side leading 1-15 to 0-6 at the break.

Half-time subs made a difference to the Mumgret attack and, while the three frees they earned for O'Brien to punish were cancelled out by Griffin collecting the break off a long delivery to crash past Conor O'Brien, they picked it up again for Barry Duff's point and Niall Mulcahy, despite being horsed off possession on the run, recovering to whip the sliotar past Hedderman. Paul O'Brien's follow-up reduced the gap to seven and it dropped another, after exchanges between Luke O'Connor and O'Brien and between Aidan O'Connor's free and Conor O'Halloran, O'Brien sent over his ninth point of the hour.