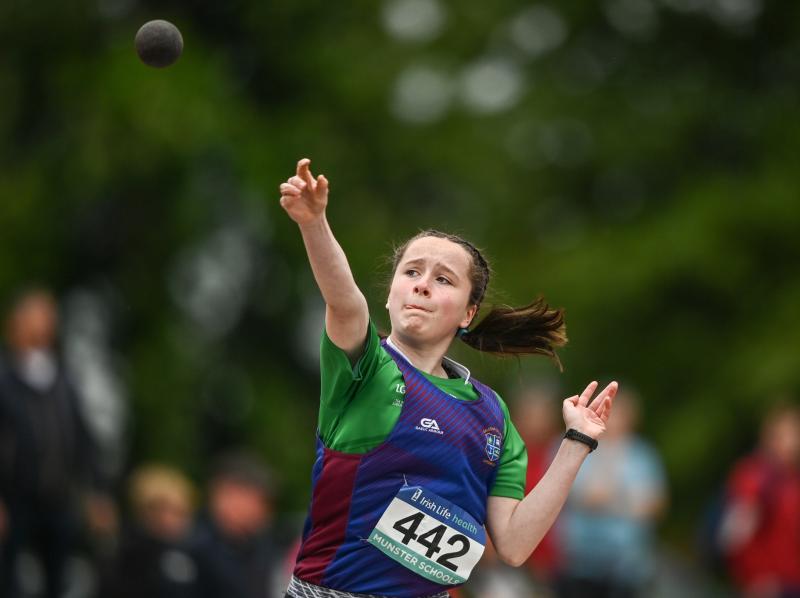 Eimear Ryan, of Salesian College Pallaskenry, competing in the junior girls shot put during the Munster Schools Track and Field Championships at Templemore

Last Friday the 27th of May, Kilmallock Athletic Club held their popular Four mile road race for the first time since 2019. The race was renamed the Zach Bishop Memorial 4 mile road race in honour of their club member who sadly passed away earlier this year.

The race was held in warm summer conditions which contributed to the healthy attendance of approximately 125 runners plus some walkers. There were strong representations from all Limerick clubs plus some from Cork and Tipperary.

At the business end of the race Niall Shanahan of neighbouring An Brú continued his winning run, which saw him win the highly competitive John Buckley 5K in Cork recently, with a commanding success in a time of 19:48. West Limerick’s Karl Lenihan was 2nd in 21:10 with club mate Aogán Mac Domhnall also getting on the podium.

In the women’s race, Clonmel AC runner Keeley Tideswell won in an impressive time of 22:52. She also became the first recipient of the Tommy Hanley memorial cup donated by the family of the late Kilmallock AC runner, a member of the all conquering club team of the late 50’s & early 60’s. Multiple former winner of the race Carol Finn was 2nd in 23:18, with Ailbhe McDaid 3rd in 24:44.

First local runner home was recent recruit Sam Hand who posted an excellent time of 22:44 to finish 11th overall. Sam is more at home in trail and ultra running but his time showed him to be very competitive on the roads as well. Krzysztof Sikorski, also running for Kilmallock, finished in 19th position in 23:50.

There were also impressive performances in the age categories. Ian Buckley of North Cork AC was first Juvenile home and 5th overall in 22:33 with his fellow club runner Ciara Kiely first juvenile female in 27:24. First over 40 male was Daire O’Sullivan of Mallow AC with Johnny O’Sullivan (Grange-Fermoy) first M50.

The biggest cheer of the night was for Kilmallock AC running coach and local legend Tony McMahon who won the M60 category. In the female age categories Lisa Finn of Mallow AC was first over 40 female, with Catherine Lynch (North Cork) winning the over 50’s and Kathleen Cronin another of the Mallow contingent first F60.

Junior - Victoria Amiadamen (Dooneen) won the Junior 400m in a CBP time of 56:04 and in doing so has achieved the European U18 Championship qualifying time. Leagh Moloney was second in the Long Jump clearing 5.44m. She also ran the 100mh in 15:09.

Around the Country and Abroad:

Dooneen’s Paul Costello has been selected for the Irish 4x100m relay team who compete in Greece next weekend.

Olympian and World Championship finalist Sarah Lavin took 1st place in the in 100m hurdles in 13:00 secs at the International meeting in Anhalt, Germany last week.

Dooneen’s Éadaoin Hennessey was first Woman in the Lough Cúltra Half Marathon in 1:40:51

Limerick Athletics wishes to express it’s regret at the passing of John Collins, Honorary President of the Country Club AC and who contributed much to Athletics over many decades. Ar deis go raibh an ainm dílis.