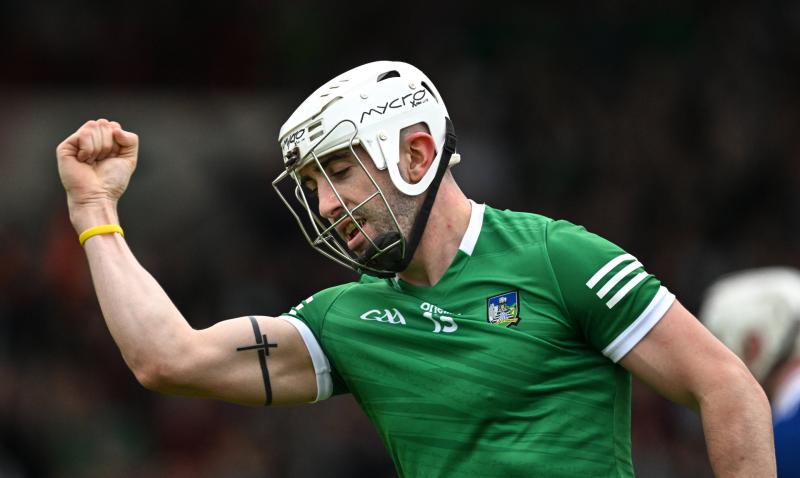 In the TUS Gaelic Grounds this Sunday it finished Limerick 3-21 Limerick 0-23.

Tipperary led entering the final 10-minutes when John Kiely's men in green found a run of scores to seal the win - eight of the final 11 scores for the men in green.

Limerick now have one foot in the Munster SHC final ahead of next Sunday's final group game against Clare in Ennis.

The win also ensures Limerick will advance beyond Munster and into the All-Ireland series.

While Limerick found Conor Boylan and Aaron Gillane goals in the final minutes, this was a sluggish display - littered with 13 wides.

Watched by 27,141 Tipperary were 0-14 to 1-9 ahead at half time after a first half littered with errors in a lacklustre Limerick display.

The sides evenly shared 18 wides in the half in which half the Tipperary scores were from Noel McGrath frees.

It was a deserved interval lead for Colm Bonnar's side after the sides had been level on four occasions.

And, all had started so well for Limerick.

Darragh O'Donovan, Aaron Gillane and Tom Morrissey were among the early Limerick scorers from play as the men in green were 0-4 to 0-2 ahead on five minutes.

The lead was out to four points on six minutes when Gillane climbed highest over Seamus Kennedy to fetch a Diarmaid Byrnes delivery. On the turn, Gillane dispatched to the net for a 1-4 to 0-3 advantage.

However the goal appeared to stir Tipperary more than motivate Limerick.

Gillane and McGrath exchanged the next four scores with frees and it was 1-6 to 0-5 and 13-minutes played.

Then Limerick went 13-minutes without a score as Tipperary got on top and Limerick appeared too casual. Tipperary hit six successive scores to edge 0-11 to 1-6 ahead with Ger Browne and Jake Morris with neat scores.

Michael Breen had a chance for goal but Nickie Quaid stood firm on 25-minutes.

Finally it was Cathal O'Neill that ended the Limerick barren spell with two quick-fire points.

Graeme Mulcahy added another but down the other end, Tipperary were still keeping the scoreboard ticking over and brought a two point lead into the half time dressing room.

Gillane (free) and Gearoid Hegarty accounted for two of the first three points on the change of ends but that didn't signal any sustained dominance from Limerick.

Barry Nash thundered out of defence to score and Tom Morrissey had a trademark score from the left sideline to try spark Limerick into form.

Gillane (free) and Byrnes ('65) then levelled the tie for the fifth time.

Then came the goals - Conor Boylan and Gillane in four minutes to seal the win.