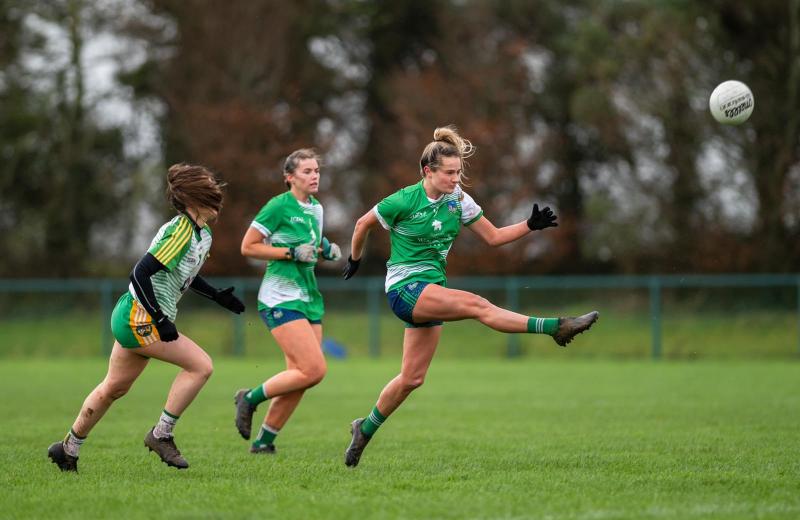 Limerick captain Roisin Ambrose sets up an attack in the win over Offaly. PIC: Mark Sheahan

In Staker Wallace GAA grounds in Martinstown this Sunday it finished Limerick 3-4 Offaly 1-6.

Two wins from two outings mean that Limerick will advance to the semi finals of Division Four as group winners ahead of the final round trip to Carlow.

Strong gusting wind and driving rain made conditions hard for both teams.

The Graham Shine managed Limerick had the aid of the swirling breeze in the first half and brought a 1-4 to 0-4 lead into the interval.

Given the conditions scores were always going to be hard come by.

A Catriona Davis free opened the scoring but Fiona Dempsey hit back for Offaly to leave the score at just 0-1 each at the first half water break.

In the second quarter Grainne McKenna and Iris Kennelly had Limerick points but Offaly actually edged 0-4 to 0-3 ahead with Ellee McEvoy scores.

Then came the first Limerick goal - Catriona Davis saw her shot fly into the net, under under the crossbar and out of reach of the Offaly goalkeeper.

When Cathy Mee added a point, Limerick were 1-4 to 0-4 ahead and that's how they went to the half time dressing room.

In the second half, Limerick were in defensive mode.

The third quarter saw only two Offaly scores to move the Leinster side 1-5 to 1-4 ahead entering the final 15-minutes. Their goal from Saoire McGuinness.

Then with the stopwatch just inside the final 10-minutes came two quick-fire Limerick goals.

The first from Iris Kennelly and then within 60-seconds Cathy Mee added another.

That Limerick had 3-4 to 1-5 ahead and they were still playing with 14-players due to the sinbin.

Offaly went in search of goals but Limerick had Sophie Hennessy as a safe pair of hands between the posts to keep The Faithful County at bay.

Just as Kavanagh returned from the sinbin, Limerick lost Maeve O'Halloran to another yellow card but time was in their favour to hold out for a merited victory.