John Kiely: 'I give the players my admiration as they never cease to amaze us' 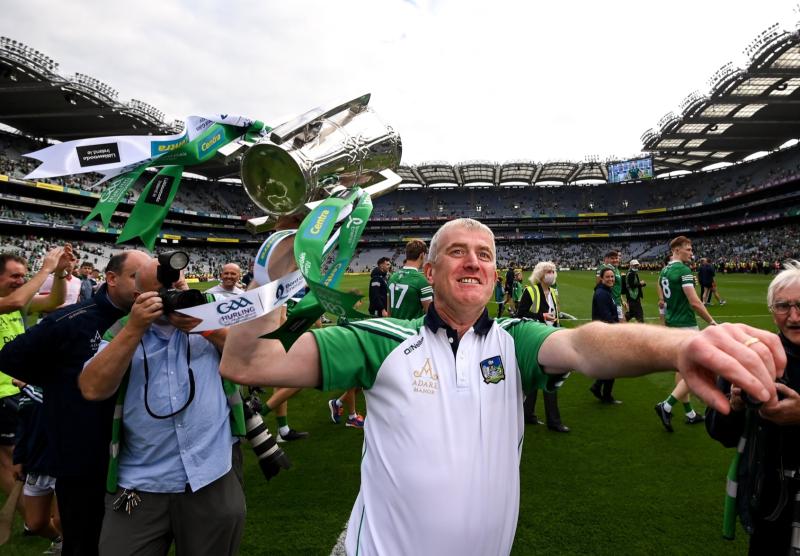 The wing back had just soloed 70 metres, swerved past Tipperary challenges, hoped the sliothar off the surface and then crashed to the net in the 53rd minute of the Munster SHC final.

And, with that Limerick’s season was elevated to another level – a level, Tipperary, Waterford or Cork couldn’t match.

That Hayes goal set Limerick on the way to a 2-29 to 3-21 provincial final win – ending an 85 year wait to win three successive provincial titles.

Limerick trailed by 10-points at half time but turned it around to win by five points as John Kiely’s men won a first Munster SHC three-in-a-row since the men in green ruled the province between 1933-36.

Limerick outscored Tipp 1-10 to 0-1 in the third quarter to turn the contest on it’s head.

“The third quarter was our strongest performance in five years - it needed to be, it had to be. It was up there with our best 16-17 minutes of hurling,” said John Kiely after Declan Hannon lifted the trophy.

“They had to stand up because we were extremely disappointed with our first half performance. We felt we left ourselves down in many aspects of the game that we pride ourselves in and especially our work-rate - it wasnt there in the first half and we won’t get away with that in the future,” stressed Kiely.

“We had to to unify as a team - I think that was the difference in the second half we played as a real team. Every player played for eachother whereas in the first half we didn’t do that. It was an incredible second half performance. I have to give the players my admiration and they never cease to amaze us. We have a couple of reference points in the past of where we came back from fairly significant deficits and put in a second half performance”.

Cian Lynch: 'You want that appetite and hunger to be sparked again when you go back'

Reflecting on 2021, unity is also mentioned by Hurler of the Year Cian Lynch.

"We go on about our family at home and our friends at home but when we step inside the field or go into training this is our family. Especially the last 12, or 18 months we've had each other and when we walk in between those white lines with Limerick we fight for each other and would die for each other. Going back to the word team, every man out there on the pitch is on the next man's shoulder, driving the next man on, pushing the next man beside him, that's what it's all about,” said the Patrickswell man.

Away from senior level, Limerick contested the Munster U20 hurling final – losing 1-26 to 1-24 after extra time to Cork in Pairc Ui Chaoimh. The Diarmuid Mullins managed side had beaten Clare in the semi final.