Limerick SFC round three Team of the Week 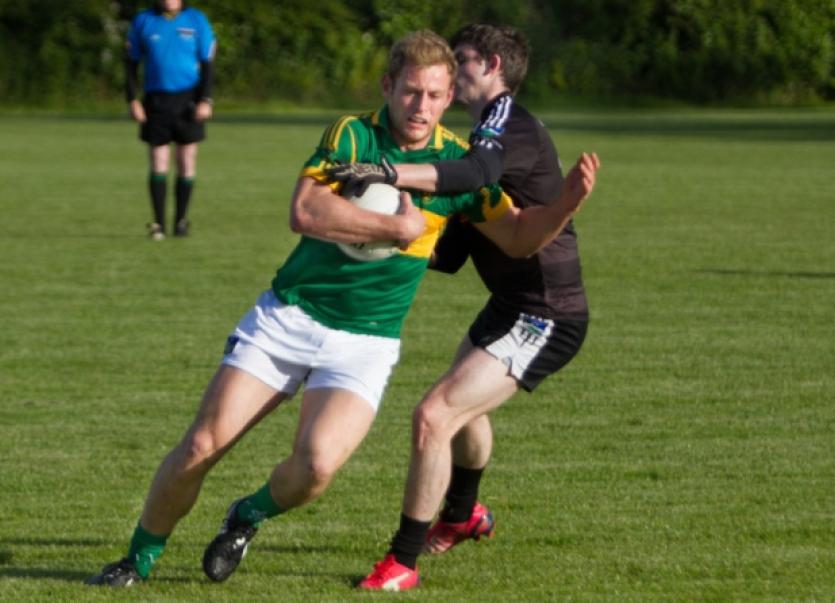 ROUND three of the Limerick SFC took place last weekend with two sides continuing their winning start to the championship.

ROUND three of the Limerick SFC took place last weekend with two sides continuing their winning start to the championship.

After three rounds of the five group games, Newcastle West and Ballysteen have three wins from three outings in their group.

In the other group, champions Ballylanders, Dromcollogher-Broadford and St Patricks are all tied on two wins from three.

After three rounds of action, the Ballysteen goalkeeper remains the only no1 yet to be beaten in the championship. His team have only conceded 0-20 in their wins over Adare, St Kierans and Na Piarsaigh.

The corner back was first to everything in Monaleen’s commanding win over Pallasgreen. The east Limerick side didn’t score from play in the opening half and this was largely down to a lack of possession with Clarke and colleagues tight and tigerish in defence.

It was a must-win game for the champions in their county final repeat with Ballylanders and they responded. Up against Eoin Hanrahan and John Mullane twin attacking threat, Fox stood firm and St Patricks only found two points from play over the hour.

The corner stone for the city side’s first win of the season was the corner back. He brought ball after ball forward and one of those ended up with Padraic Kennedy kicking the late late winning point.

Pushing St Patricks onto the back foot was a key component of Ballylanders win over the table-toppers. St Patricks missed the presence of Gearoid Hegarty but ensured gain was made of his loss meant Bally had to get on the forward foot. O’Connell put an amount of possession through his hands stopping St Patricks route to goal

The inter-county men is the guiding hand at the heart of the Ballysteen defence, which is the foundation of a winning run that has one foot in the knockout stages. Last weekend Ranahan and Co kept opponents Adare to just five points.

Tom McLoughlin may have come out of retirement to play JBFC last weekend, but Fahy and Co have been solid in the Drom-Broadford half back line to-date. They were forced onto the back foot against Rathkeale but stood form overall.

St Kierans were eventually beaten by Newcastle West but for long periods the men in green and gold asked serious questions of the tabletoppers. That was largely down to the big performance of Treacy around the middle third.

The U-21 dual player is a key player for the intermediate champions and his launchpad of possession from midfield was a huge reason they hit top form to beat Fr Caseys. He set the tempo with their first score out of 0-12.

Kelly rolled back the years to dig Newcastle West out of trouble. St Kierans were 1-5 to 1-3 up at half time but four second half points from play from Kelly steered Newcastle West to a third win on the trot.

Russell lined out at centre forward for Monaleen. His side scored 1-11 from play and Russell wasn’t among the scorers.

Yet he was vital to their success. From start to finish his work-rate set the bar for others around him, in a display that saw Monaleen bring much more intensity and hunger for possession than their opponents.

Although Stephen Kelly’s four second-half points into the wind delivered Newcastle their victory, their revival was launched by the endless running of Cian Sheehan who almost single-handedly drained whatever energy was left in the Kierans’ defence.

It was Phair that stood tall when Drom-Broadford needed scores to keep touch with Rathkeale and then to surge towards victory. He finished with four points from play out of a tally of 0-7.

Matt O’Meara, fully justified his selection at the edge of the square with two superb points. His overall contribution was superb and the full forward who won the battle with his marker, was a constant menace to the Adare defence.

The forward scored six of Ballylanders’ tally of 13 scores - all from. Especially in the first half when scores were hard to come by, O’Callaghan was unerring. O’Callaghan got injured early in the second half and while hobbling he steadied himself to kick two big frees from distance to guide Ballylanders into a 0-9 to 0-3 lead.