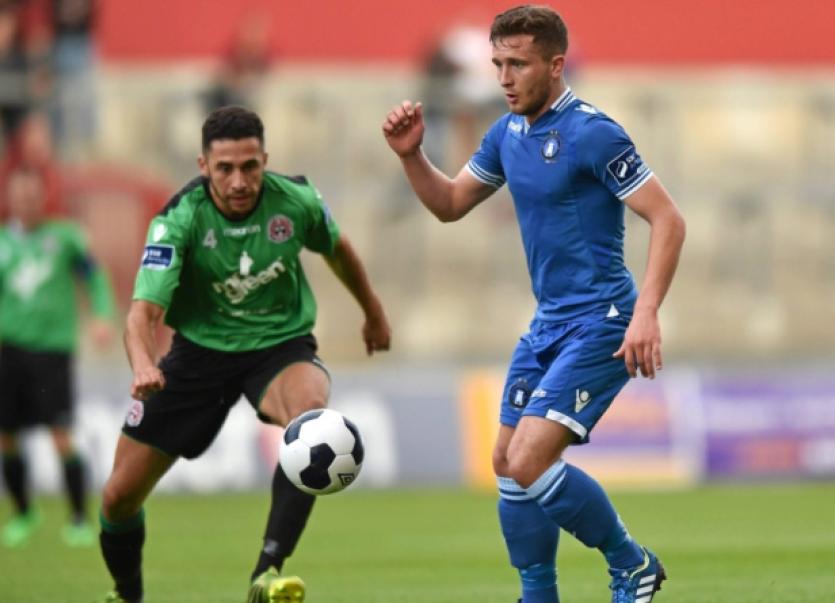 LIMERICK FC’s Jason Hughes says the relegation threatened Blues needs their supporters ‘now more than ever’ as Martin Russell’s side face a critical period in the Premier Division season.

LIMERICK FC’s Jason Hughes says the relegation threatened Blues needs their supporters ‘now more than ever’ as Martin Russell’s side face a critical period in the Premier Division season.

Limerick played their first game at the Markets Field since April 1984 when going down 2-1 to Drogheda United in the Premier Division last Friday before a bumper attendance.

Limerickman Hughes – currently filling in at right-back for Martin Russell’s side – admitted that the run-out from the tunnel at the redeveloped Garryowen venue gave him ‘goose bumps’.

And 24-year-old Hughes is hoping to see a similar turnout when Limerick return to the Markets Field for crucial back-to-back home matches against Bray Wanderers (July 4) and Galway United (July 11), as their Premier Division survival fight continues.

“Personally, I was amazed to see so many people. It was great for me; it was a big honour to play there. The crowd does lift us,” Hughes said.

“The crowd plays a big part – it’s like the 12th person, and if the crowd keeps coming out, that will only help us and boost us on. We need them now more than ever.

“Personally, when I walked out, it gave me goose bumps. With the President being there as well, it was a really big day for us. All the fans really turned out. It was just a pity about the result.

“Unfortunately, we didn’t get the win that we wanted. I thought it was a penalty at the end. We would have taken even a draw just to get the crowd back the next time, but there’s no point in keeping our heads down. We’ve got to look up and hopefully push on this weekend.

“The Markets Field is a big pitch in a closed area. If you put 3,000 people there it’s really going to lift the place. It just really felt like a proper stadium. We were home and it was great to be there.

Limerick now face into back-to-back away trips to Saint Patrick’s Athletic on this Friday, June 12, and Premier Division Leaders Dundalk, June 26, either side of the league’s mid-season break.

“Obviously, people have probably written us off at this point,” Hughes said.

“And we’re probably not expected to get anything out of those (two next) games. We’ve just got to keep going and hopefully pick up something.

“Where we are at the moment, it’s not great so if we can maybe get a win or even a draw – we would take that. We’ll obviously be looking to win and then push on for the Bray game at home.

“St. Pat’s is a tough place to go. They like to play football and they’re the type of team that if you stand off them they are going to hurt you. I honestly think if we all work really hard and press early we could cause an upset.”

On his new role at right-back, he added: “It’s tough, because position wise I’m not too sure where to go. To be fair, Martin (Russell) has been working on that in training, telling me where to be and the boys have been talking away to me.

“It’s new, so I’ll just take it in my stride and hopefully I can do well and keep my place in the team. We’ve got to look forward to Friday and lift the spirits. Training is good. Hopefully, we’ll lift it on Friday.”