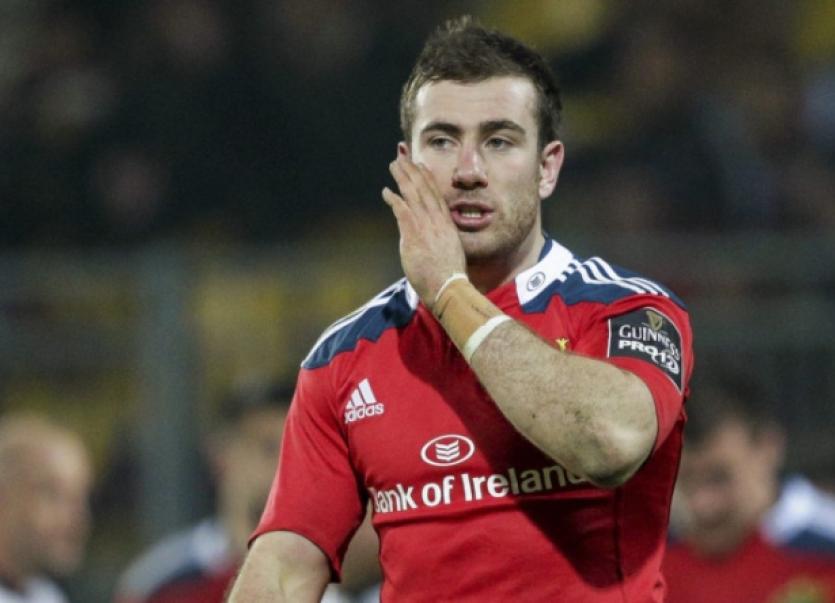 DEPARTING Munster star JJ Hanrahan has insisted his move to Northampton Saints next season was solely motivated by rugby.

DEPARTING Munster star JJ Hanrahan has insisted his move to Northampton Saints next season was solely motivated by rugby.

Hanrahan announced his decision to leave Munster after failing to nail down a starting spot at out-half under new head coach Anthony Foley.

The 22-year-old confirmed his departure to team management this month despite being offered a three-year Munster deal. It was reported Hanrahan had been offered a deal worth €190,000 a year to join the Saints.

In his first press interview since the announcement at the Castletroy Park Hotel this Wednesday, UL-Bohs clubman Hanrahan said he had ‘huge ambitions’ for his career.

“Look, I was in a very privileged position to be offered two very good contracts, both Munster and Northampton. Look, Munster were great throughout all this, but at the end of the day it was just my decision based on what I thought was best for my future.

“At the start I took advice from a close group of friends, family, some senior players. At the start I got their opinion on it. Okay basically to see am I absolutely crazy here, is my thinking right? Maybe it was like a bit of a fear factor in there, but the last four weeks basically sat in bed every morning, two minutes, okay, where is my head at. I did that for about four weeks in a row and eventually came to my decision.

“You can’t really say it’s based on any one factor. Throughout the process you’re weighing up different things from all sides of it. Ultimately, it’s what I felt was best for my career and where my career development and progress could be. I suppose I see myself, at the moment, the best way for my development would be in Northampton next year in terms of opportunities to play, opportunity in terms of the new challenge, new environment. I suppose becoming a stronger character as well. Going into a new environment like that, you have to become a really strong character. If you’re ambitious to play for Ireland and have ambitions of playing for Ireland, you have to be a strong character and mentally tough. I suppose it’ll develop that side of the game as well.

“There has been a mixture of reactions to the decision, but the people that really matter to me are my family, my close friends and that’s the people that matter to me. They are the people who I really seek guidance in. They understand my reasons for leaving and it has been very, very positive form their point of view.”

Hanrahan said he believes he can offer most value to a team playing in the out-half position.