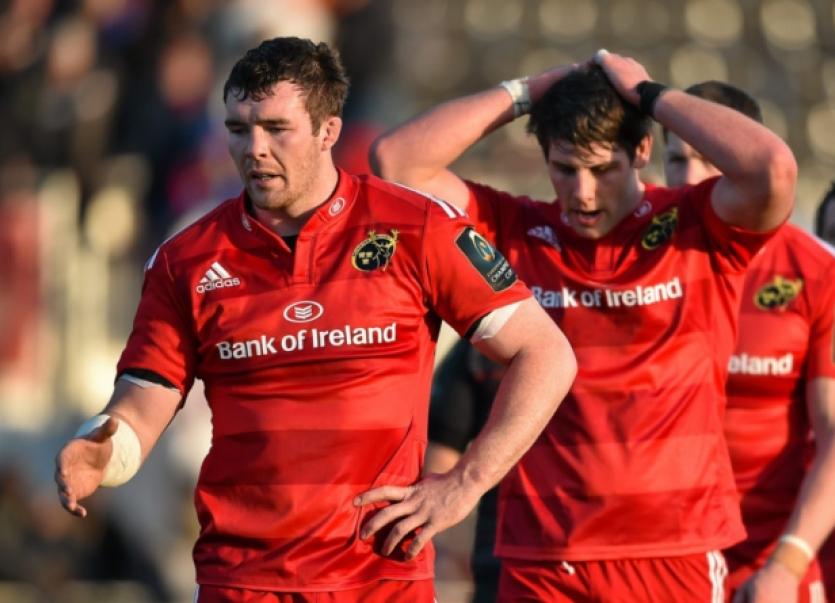 CAPTAIN Peter O’Mahony admitted the side need to put on a performance the Munster fans deserve on Sunday after letting a ‘huge amount of people down last weekend.’

CAPTAIN Peter O’Mahony admitted the side need to put on a performance the Munster fans deserve on Sunday after letting a ‘huge amount of people down last weekend.’

Munster limped out of this season’s European Champions Cup after shipping a 33-10 defeat away to Saracens. The province complete their Pool 1 programme of fixtures with a ‘dead rubber’ clash with Sale Sharks at Thomond Park this Sunday, 3.15pm.

O’Mahony said: “You can’t hang around feeling sorry for yourself. You’ve got to get on with it. We’ve left a huge amount of people down last weekend and we’ve got to dig deep and show them that it’s there on Sunday, that we’re better than that, that there’s a performance there that they deserve and we need to show.”

O’Mahony insisted players were not blaming their lengthy injury list or a perceived inability to compete financially with the big-spending French and England clubs as contributing factors in their Sarries defeat.

O’Mahony said: “I don’t think any of the players gave any of those excuses for Saturday’s defeat. Money and what was the other one, injuries? I don’t think any of the players have given those excuses. I don’t think we have given any excuses. We were very poor at the weekend. If guys aren’t going to hold on to the ball, if guys are going to miss roles, as I said you’re not going to compete with a team like Saracens. If you have all the money in the world, if you’re Toulon or whoever, if you’re going to play like that you’re not going to compete.

O’Mahony said he hoped his contract talks would be ‘done as fast as possible’, indicating that his preference is to continue playing at Munster.