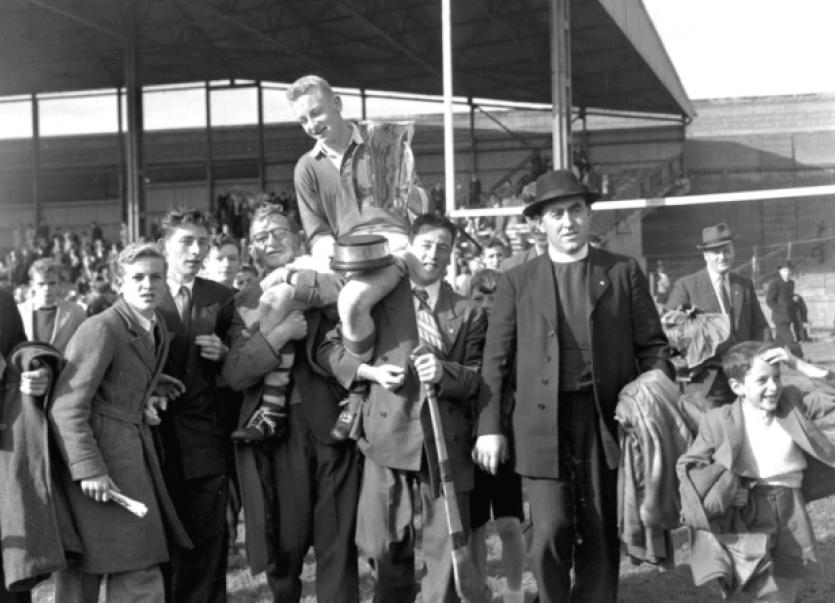 The remainder of that decade passed without success but Limerick returned in the ‘50’s with a number of strong teenage sides.

Limerick lost the ‘57 final 3-8 to 1-4 to a Tipperary side that progressed to win the All-Ireland.

But 12 months Limerick were back in the winner’s enclosure.

“We had a great side alright,” he recalled this week from his home in Cork city.

“It certainly wasn’t a surprise to us that we won it.”

His confidence came from the campaign of the previous year and the run of Limerick CBS of Sexton Street to the Harty Cup final that Spring.

“We should have won that Harty Cup. We played Flannans outside in the Gaelic Grounds in the final - there was a gale blowing so bad that you couldn’t lift the ball onto the hurley,” recalled Cobbe.

“We had about half of that Harty team with Limerick.”

Limerick captain Cobbe was one of five St Patrick’s men on the winning panel. The city side won a hat-trick of county minor hurling championships from 1956-58.

Limerick’s minor campaign started on June 1 with a 6-6 to 4-6 win over Tipperary in Cork.

“We lost the final to Tipp the year before but they had a great team that time with Jimmy Doyle and others. But the following year we are better,” outlined St Patrick’s club-man Cobbe.

In the Munster semi-final Limerick needed a replay to overcome Clare.

“I scored 4-5 the second day,” recalls Cobbe of the meetings with Clare.

Waterford were the final opponents on July 6. Limerick were comfortable 8-9 to 2-5 winners.

“I think I got cut early in that game - by one of my own!,” laughed Cobbe.

Then it was onto Croke Park for the Limerick youngsters.

The All-Ireland semi-final in Croke Park was another easy win for Limerick - 8-14 to 0-2 over Antrim on August 10.

But the September 7 final was to be a much closer affair.

Claughaun’s Pat Murphy and Sean Hayes of Cappamore were the scoring heroes with 2-1 each.

The game was the curtain-raiser to the Tipperary/Kilkenny All Ireland senior final and attracted 47,000 to Croke Park.

“We got a goal about five minutes from the end,” recalled the captain of their winning margin.

“One of the things that I remember was that the two captains got the cup outside on the sod. They had knocked the Hogan Stand at the time. I had to wait around until after the senior final and then myself and Tony Wall (Tipperary’s winning senior captain) were presented with our two cups,” recalled Cobbe.

The half forward had to remain togged out for the near two hour wait and can recall someone providing an overcoat to keep him warm.

Limerick’s back room team at the time contained 13 selectors and Cobbe remembers Fr Gerard McNamee writing a speech for him before the end of the senior game.

Limerick returned home after the game.

“We stayed up the night before - it was like going to America for us. There were about four or five of us in a room that night,” he laughed.

“We went up and came down in Taxis - I think Tommy Casey was driving the taxi and he drove Mick Mackey in 1940,” said Cobbe.

On return to Limerick it was off to Flannery’s Hotel for a reception.

“We thought we would be back again for the big one in a few years but it never happened,” said Cobbe, who played senior with Limerick in 1963 and ‘64.

“Limerick hurling was flying that time with a couple of junior wins and the minor and there were Harty Cups - even the local championships were flying,” said Cobbe, who hopes to travel to Croke Park this Sunday to see Limerick lift a fourth All-Ireland minor crown.