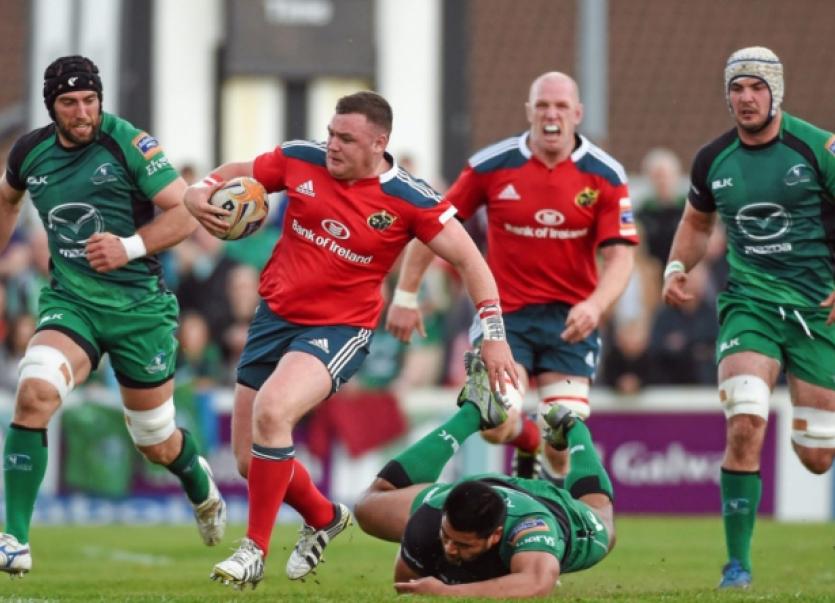 MUNSTER moved back up to second place in the RaboDirect PRO12 table after recording an exciting 32-23 bonus point victory over Connacht at a sun-drenched Sportsground on Easter Saturday.

MUNSTER moved back up to second place in the RaboDirect PRO12 table after recording an exciting 32-23 bonus point victory over Connacht at a sun-drenched Sportsground on Easter Saturday.

Rob Penney’s men enjoyed a timely boost ahead of their mammoth Heineken Cup semi-final clash with Marseille on Sunday, April 27, outscoring their opponents by four tries to three in excellent playing conditions.

Man of the Match Paddy Butler crossed for the bonus point try on 72 minutes as Munster bounced back from their disappointing home defeat to Glasgow Warriors seven days earlier.

Munster lead 27-8 at half-time, in a hugely entertaining, free-flowing contest played in sunny conditions. The visitors bagged three tries in the opening half through flying wingers Andrew Conway and Gerhard van den Heever and full-back Denis Hurley. Matt Healy had grabbed an early try for Connacht.

The game included a Connacht senior debut for Limerick native Jack Dinneen, a Munster Schools Senior Cup medal winner with Crescent College in 2013, who came on as a second half replacement.