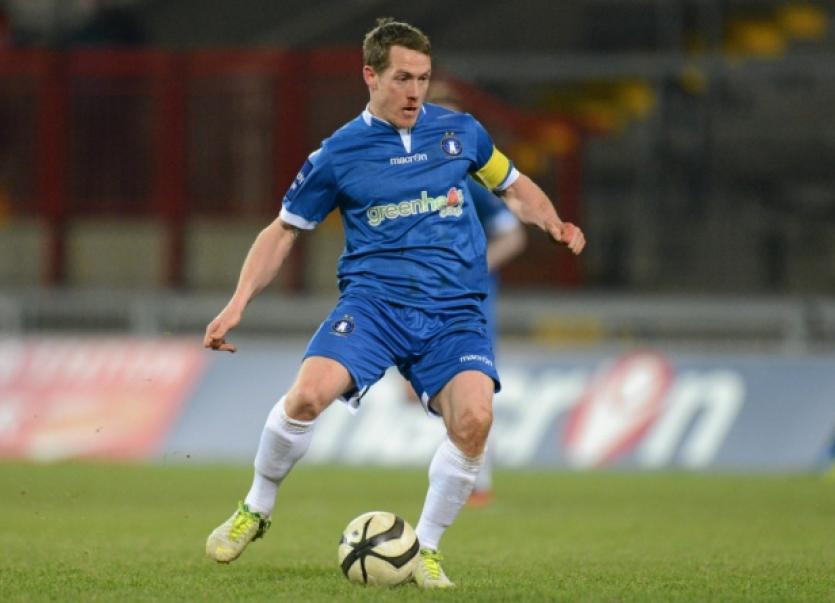 PLUCKY Limerick FC played out an eight-goal thriller with Bray Wanderers in a sizzling Airtricity League Premier Division tie at Thomond Park this Tuesday night to remain in sixth-place in the top flight table.

PLUCKY Limerick FC played out an eight-goal thriller with Bray Wanderers in a sizzling Airtricity League Premier Division tie at Thomond Park this Tuesday night to remain in sixth-place in the top flight table.

Stuart Taylor’s Limerick side looked all set to record their third successive League win when striker Craig Curran fired the Blues into a dramatic 4-3 lead in the 85th minute. However, plucky Bray earned the point their performance merited when Kevin O’Connor netted the equaliser two minutes from time.

The 914 spectators who turned out on a warm, balmy evening got full value for money as the sides served up a pulsating contest, full of twists and turns, in perfect playing conditions.

The game had been brought forward from Friday night to allow preparation work begin at the venue for next Tuesday evening’s Bruce Springsteen concert.

The visitors went in front on six minutes Ismahil Akinade scored after being played in by John Mulroy.

Four minutes later, Akinade was again the central figure in the action. As Lims keeper Barry Ryan raced out to meet the advancing striker he tumbled to the ground. Match referee Sean Grant judged that Akinade had taken a dive and was yellow carded.

Bray might well have added to their tally with Mulroy shooting wide when one-on-one with Ryan in the 18th minute, eight minutes before the break Kieran Marty Waters saw his close range effort smack off the left upright.

To be fair, Limerick created a couple of decent chances with Craig Curran’s curling effort in the 12th minute flashing just wide and striker Axel Bossekoa heading just over mid-way through the half.

The Blues drew level in the 40th minute against the run of play when Joe Gamble pounced to score after Bray ‘keeper Darren Quigley could only parry Shane Tracy’s free-kick from just outside the penalty area.

Incredibly, Bray regained the lead two minutes later when the lively Akinade powered through the home side’s defence to score.

The open nature of the game continued at the start of the second half as the game produced its third goal in seven minutes.

Dave O’Leary’s corner from the left was headed home by Blues striker Bossekota.

Limerick gifted their visitors a lead goal in the 74th minute. Defender Robbie Williams was dispossessed just outside his own penalty area and substitute Ryan Coombes showed excellent composure to slide the ball past the helpless Ryan.

Resilient Limerick fought back and Craig Curran’s curling effort from the left edge of the box took a slight deflection off a Bray defender before flying high into the net.

Curran looked to have secured all three points for the home side with his second of the game, until Kevin O’Connor, who was later sent off for two yellow cards, netted the equaliser.