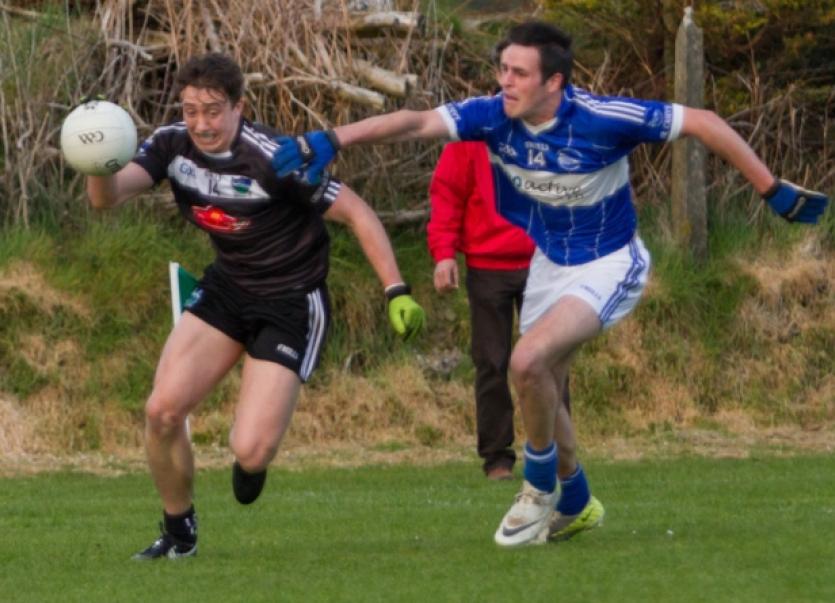 ROUND Two of the Irish Wire Products sponsored Limerick SFC takes place this Friday and Saturday with five games down for decision.

ROUND Two of the Irish Wire Products sponsored Limerick SFC takes place this Friday and Saturday with five games down for decision.

What a round two contest this is for football followers.

Both lost in round one so another defeat is not want either club need in a most competitive group.

Champions Ballylanders were shocked by underdogs Pallasgreen in round one. They relied heavily on frees in that game, while Pallasgreen found their way through for goals at vital stages. Ephie Fitzgerald will seek a return to last season when his hard-working side didn’t cough up easy scores and were intelligent at the other end of the field.

They face a Monaleen side that lived with Dromcollogher-Broadford for a spell but just faded in the second half. Jack Hoare went off injured and is a key cog at centre back.

But they did have the likes of Evan Quinlan and Paul Kinnerk among their subs last time out and could strength their line-up if Muiris Gavin needs to do so.

ANOTHER big step up for the city side and the third fourth weekend in a row of championship action for some of their stars.

Newcastle West were one of those to catch the eye in round one when beating Fr Caseys.

James Kelly should now be back to bolster their attacking options.

The reverted Stephen Kelly into defensive mode in that win over the Abbeyfeale men and the Caherdavin side could find this approach difficult to break down.

Na Piarsaigh did well in stages when losing to Ballyteen but just couldn’t find the necessary scores. They will need early scores to settle into the game, especially when they were hard to come by last time.

Newcastle West were big winners when these sides met in the All County League and Mike Quilligan and management will stress the need for consistency ahead of this time after seasons where performance level have been up and down.

THIS is the only contest in this group where both sides lost in round one.

Both went close to victory but just fell short at the final whistle.

More so Adare who turned in a fine second half display but lacked the necessary experience to push-on in the final 10-minutes against St Kierans.

Paddy Mulvihill will ask for a repeat of that period of the game but from the opening whistle. With the Lyons and Mulvihill brothers mixed with others there is scores in the team if their half back line and midfield can hold their own.

But they will face an Abbeyfeale side anxious to get a first win for John Colbert.

The concession of goal in either half was their downfall against Newcastle West.

Overall they were slow to start and management will push for more in this encounter.

Overall, Fr Caseys should carry too much power for Adare, who have now sent out a warning signal with their merited display in the opening round.

This is a mouth-watering clash of two teams that won in round one.

Another victory will sit the winner nicely on top of the group ahead of the Munster championships.

St Patricks were the bigger winners in round one but Drom-Broadford probably faced stiffer opposition.

Killian Phair kicked three points as a sub and could be ready to start after a hamstring strain.

Player-manager Micheal Reidy will know of the need to curb Gearoid Hegarty and the battle with Jason Stokes should be interesting.

Drom-Broadford also need to curb the influence of Eoin Hanrahan and John Mullane.

These sides met in round one last year and the west Limerick men were big winners. No doubt former Drom-Broadford manager Moss McCarthy will remind his city side of that game ahead of Saturday.

THIS was always going to be a key game in this group for both these west Limerick rivals.

Even more so after both winning in round one.

Another success and the knockout stages becomes very attainable as the Summer stretches out.

Twelve months ago, St Kierans were 0-10 to 0-6 winners and it was them that advanced to the business end of the championship. They just about made it past Adare in round one wheen they found two late goals to deny the dual senior club.

Regular full back Paudie McCarthy was missing that evening and his return would be a big boost.

Ballysteen had Mark Ranahan sent off in their win over Na Piarsaigh in round one and battled brilliantly to edge the victory.

Pakie Moran missed that game and would give them extra options if he were back in the fold.

Ballysteen have Niall Crowley in their management ranks and he has previously had a spell with St Kierans.