Munster denied at the death by Ulster in PRO12 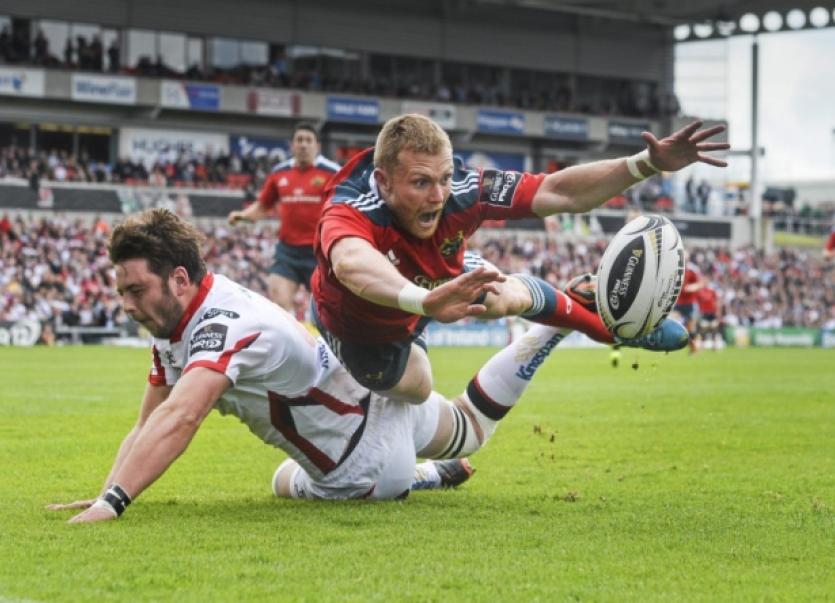 ULSTER denied Munster a precious away win in the battle to secure a home semi-final in the Guinness PRO12 when hitting back with a converted try in added time to secure a thrilling 23-23 draw at Kingspan Stadium.

ULSTER denied Munster a precious away win in the battle to secure a home semi-final in the Guinness PRO12 when hitting back with a converted try in added time to secure a thrilling 23-23 draw at Kingspan Stadium.

Paul Marshall’s try with the last play of the game, superbly converted by Paddy Jackson, helped 14-man Ulster secure a precious draw after Munster had looked all set to end the home side’s unbeaten home record in the PRO12 this season.

A smashing try from Keith Earls on 77 minutes after Ulster were reduced to 14 players, following the red-carding of Iain Henderson, looked to have decided the game in Munster’s favour.

Ian Keatley, who was off target with the conversion of Earls’ try kicked six penalty goals in all. Ulster lead 10-9 at half-time, thanks to Tommy Bowe’s try in first half stoppage time.

The result leaves Munster in third place in the PRO12 table, level with the Ospreys and Glasgow on points, but edged out of a home semi-final at present because of the Welsh and Scottish sides have each won a game more in the League this season, 15, to Munster’s 14.

Munster’s final regular season fixture is a crucial clash with the Dragons at Musgrave Park on Saturday next, 3pm, when the home semi-finalists will be decided.