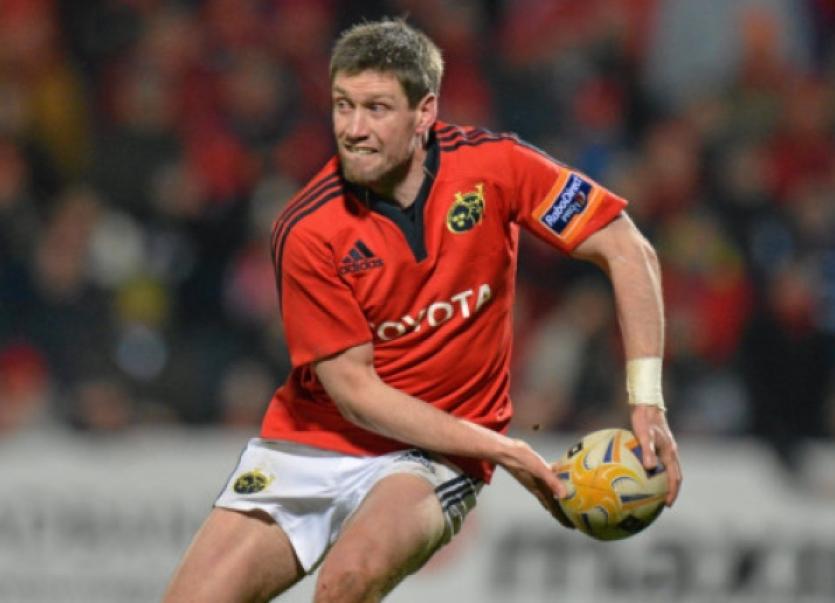 MUNSTER’S 36-year-old out-half, Ronan O’Gara insisted he had not made a decision on whether he had played his last Heineken Cup match in the province’s semi-final defeat to Clermont Auvergne.

MUNSTER’S 36-year-old out-half, Ronan O’Gara insisted he had not made a decision on whether he had played his last Heineken Cup match in the province’s semi-final defeat to Clermont Auvergne.

O’Gara, who was playing in his 10th Heineken Cup semi-final, is out of contract at the season, but the fly-half said he would not make any decision on his future until the end of the season. Carrying his young son in his arms, O’Gara saluted Munster supporters in the stands at the Stade de la Mosson following the final whistle.

O’Gara said: “It’s not the time for me to be thinking or talking about retirement. I owed it to my team-mates to be totally focused on the game today and I was.

“I love coming to France and playing and this competition have given me the best memories. I will sleep on it until the end of the season, but it will be hard to leave this beauty (turning to Paul O’Connell) on his own next season.”

Second-row O’Connell is one of a number of Munster players hoping to have impressed the Lions management team sufficiently to earn a place in the squad to tour Australia this summer. The likes of Conor Murray, Donnacha Ryan, Peter O’Mahony and Simon Zebo will also be hoping to make Warren Gatland’s squad which will travel Down Under when it is announced tomorrow, Tuesday.

Multiple Lions tourist O’Gara admitted it was very disappointing for Munster to miss out on a fifth Heineken Cup final.

“Defeat is extremely hard to take after you have put so much into a game like that. But it is winner takes all in a semi-final,” admitted O’Gara.

“This is an unbelievable competition and it was an incredible atmosphere. It was a fantastic occasion to be a part of, but the only reason we play is to win.

“There was some serious resilience from Munster and I am proud to be a part of the team. Someone said to me earlier in the week that Clermont would beat the French team and it was Test match intensity out there.

“We are growing and getting better as a team, but we gave them too much of a start. When we come away from home you ask for character from a team and we certainly showed that - we gave our all.”

Stand-in captain Paul O’Connell said Munster had paid a heavy price for a slow start and an inability to retain possession when in the ascendancy in the second half.

“I am very proud. Some days, you have days, like Harlequins, when I wouldn’t say it feels easy, but it just feels everything is going for you. Today was just the other way around,” O’Connell said.

“We couldn’t get anything going. We gave them a leg up at the start with a sluggish start to the game in every respect. In our physicality and our execution, we gave them a big leg up. You can’t do that against good sides. In the second half we had our opportunities and we didn’t really take them.

“We were doing a lot of good things when we got in for the try. We were getting down, playing the game in the right part of the pitch. We had some very good kicks from the boys which put us into their half, into their ’22 and put them under pressure.

“But we turned over ball, we have been kinda doing it all year. We are just not willing to stay in a team’s ’22 and hold onto the ball, be belligerent and stay there til we score.”