Munster face ‘fight for our lives’ to make European quarter-finals 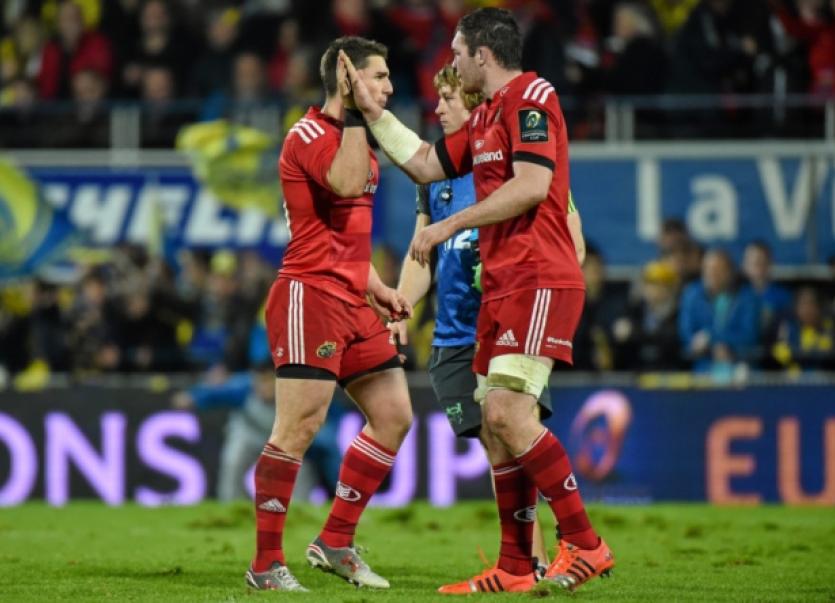 CAPTAIN Peter O’Mahony has vowed that Munster will ‘fight for our lives’ in the final two games to make the knock-out stages of the European Champions Cup.

CAPTAIN Peter O’Mahony has vowed that Munster will ‘fight for our lives’ in the final two games to make the knock-out stages of the European Champions Cup.

Munster’s hopes of making the quarter-finals of the European Champions Cup remain alive - but only just - after out-half Ian Keatley rescued a losing bonus point for the province against Clermont Auvergne at Stade Michelin.

Keatley’s last gasp drop goal saw Munster return from France with a precious point after a 26-19 defeat to the French Top 14 high flyers.

Munster make the trip to Allianz Park to face Saracens on the weekend of January 16-18 before completing their pool fixtures at home to Sale Sharks a week later.

The dates and kick-off times for the final two rounds of games are set to be confirmed by the competition organisers this week.

Peter O’Mahony said: “We grabbed a point today at Clermont. We had two good wins in the Pool before these two back-to-back games.

“Look, we dug in. Obviously, we can’t tell yet how important that bonus point will be, but it could prove crucial. I am hugely proud of the lads, just to dig in and pull a point out of it in a very tough place to come.

“We ran into a very good side in Clermont, who are playing very well. Last week at Thomond Park we made some silly errors . I think in the first half today we put ourselves under pressure with some poor kick-chase. We left them off with some quick line-outs, but as I said I am very proud of the lads for digging the bonus point out.”

Munster A secured their place in the quarter-finals of the British and Irish Cup as a best runner-up after recording a 35-13 bonus point win away to Moseley on Saturday.