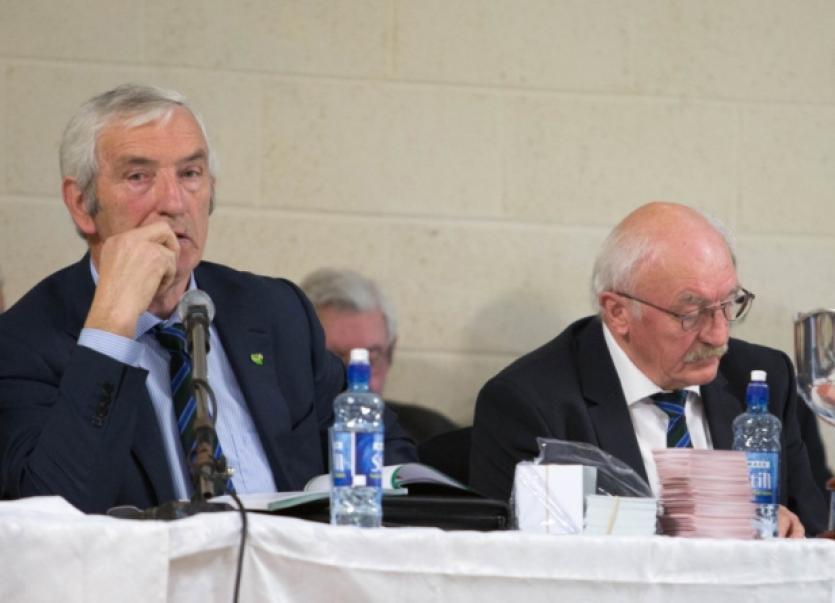 IT was a Limerick GAA Annual Convention that had passed without any fuss.

IT was a Limerick GAA Annual Convention that had passed without any fuss.

A challenge to a sitting chairman for the first time since December 1996.

But that election campaign had also passed without any fuss.

It was over two and a half hours into the gathering of over 300 GAA members in Ballylanders when the results of the vote were announced.

There was no overthrowing of the chairman.

The challenger was first to address the convention and Pat Heffernan certainly left his parting mark with a pre-scripted speech of over four minutes.

Chairman Oliver Mann had earlier spoke for 17 minutes in his annual report but when he took to his feet again he hit back at the departing vice-chairman in no uncertain terms.

One by one rebuking claims that the Blackrock club-man had made.

“I don’t regret for one minute having put myself forward because I think it is important to put your head about the parapet, especially if you feel things are being done in an clandestine way - I felt the board had become unaccountable, decisions were being made behind the scenes and that’s just not good enough. One of my reasons for putting my hat in the ring is that I wanted the business of the board to be more transparent,” started Heffernan.

He warned that “genuine people will be very slow to get involved” if there isn’t more accountability.

“People who have given all their lives to Limerick GAA have been treated with no respect - the way that some of last year’s management teams were treated was a total disgrace and it well and truly disgusted me. I was involved in the selections of the U-21 and intermediate managements for 2014 along with Mike Cunningham, Paddy Kelly, Paul Foley and Gerdie McGrath. I’m sure you all appreciate the work they put in and the success they had in recruiting Ciaran Carey, Mark Foley, Tom Ryan, Liam O’Donoghue, Jimmy Carroll, Tony Roche, Pat Howard and Don Flynn - all men who wore the green and white of Limerick with distinction. The men here at the top table didn’t want them at all - remember all the meetings about it. It was a shame how they were dumped without a reason given. I can’t see how genuine men were treated in this way - it was an insult to these former players and a huge set-back to Limerick hurling,” outlined Heffernan.

He added: “it is baffling that our minor management got the same treatment after winning two Munster finals and only for Hawk-Eye the All-Ireland was on its way”.

He said that he was proud to have “conducted a fair and honest campaign.”

“I engaged to all clubs and we aired views and that’s very important for any organisation - if anything I hope that me challenging for the chair will shine the spotlight on the workings of the board.”

He urged the clubs to “give our management more scrutiny of how business is conducted”.

“During my time as vice-chairman, I considered it my duty to ask questions and query decisions that were made. It’s up to you now delegates to demand transparency that I believe it essential if we are to be successful. Limerick teams down though the years have always been known for their pride in the green jersey,for their hard work and commitment - I demand the same from our board officers and I hope they will honour these.”

But buoyed by his big victory, Oliver Mann hit back at Heffernan.

“You delegates here have shown that you believe in this board because I think this victory today is not for me personally but the board. I reject the criticism of this board, of this management by a man who was a member of management. Every decision we make was made at management - practically the majority of them were unanimous and every other one of them were by simple majority. That’s the way we run our affairs, that’s democracy and that’s what I stand for,” said an emotional Mann.

“I am humbled by the support I have received today - it wasn’t easy to try and run an election campaign, try and do your work and also try and continue on and do the role as county chairman. I am absolutely exhausted to be quite honest after four weeks of campaigning, farming and continuing to be county chairman. So many people encouraged me and, so many, and that is obviously by the way that you voted here today, were happy with the way that Limerick GAA is being run,” said Mann.

Then the chairman turned to Heffernan’s parting shot.

The Blackrock man was just over four minutes into his speech when his penultimate line was “we all know the problem with the bonuses in Irish Water, well we seem to have it in Limerick GAA and this needs to be made known to the clubs”.

With that, he said his thank you and left the large attendance in silence.

But Mann didn’t hide from the challenge.

“I would like to deal with one issue that Pat has raised and that was about bonuses - the bonuses of the county secretary,” he said.

“I know that has been circulated over the past couple of days but I decided not to address it. I decided to address here at convention if it was risen and it has been. The county secretary by his contract is entitled to a bonus. The bonus has to be ratified by management, the bonus was ratified by management - ok there were queries about it but nobody voted against it and the only person, to the best of my memory, that was missing from that management meeting was the secretary himself whom I asked to leave while his bonus was being discussed,” explained Mann.

“Yes he was paid twice in 2014, simple reason he wasn’t paid in 2013 - we are looking for transparency, there is some of it. We can’t be selective about what we decide to say, we have to give the full facts and the full facts are the secretary is entitled to a bonus and it’s in his contract. He fully deserves the bonus for the amount of time and effort he put in on behalf of Limerick GAA,” said the chairman.

As he enters his third year as chairman, he called for unity.

“I hope together we management and clubs can work together in a sense of united in 2015 because I have always stated that there is strength in unity and the only way forward is on a united front.”