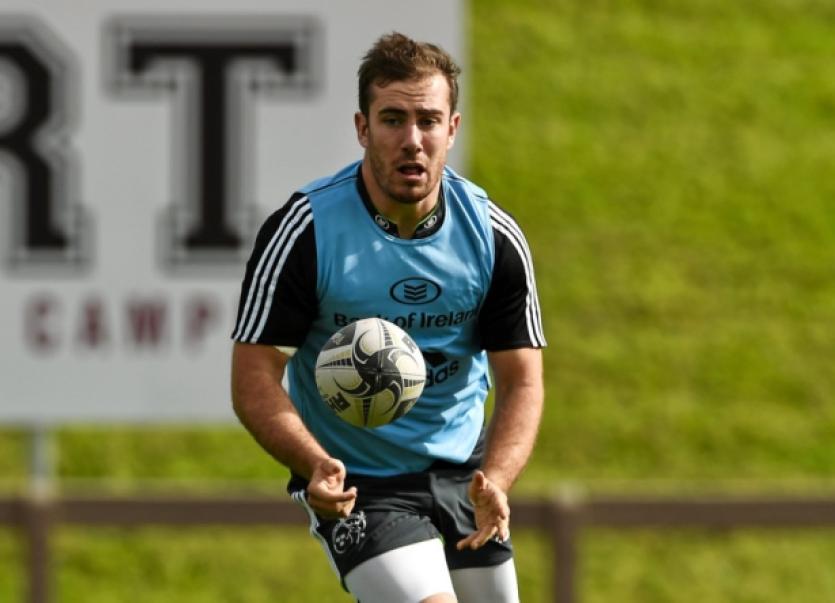 MUNSTER out-half JJ Hanrahan is looking forward to getting his opportunity to shine in Friday night’s Guinness PRO12 clash with Scarlets at Thomond Park.

MUNSTER out-half JJ Hanrahan is looking forward to getting his opportunity to shine in Friday night’s Guinness PRO12 clash with Scarlets at Thomond Park.

Hanrahan has been behind Ian Keatley in the pecking order for the number 10 shirt through the early weeks of the season, although the UL-Bohs clubman made a late return to the squad this summer.

Hanrahan came off the bench to land the match-clinching penalty in Munster’s victory over Leinster at the Aviva Stadium on Saturday night. And the debate still continues as to whether his future will be at out-half or in the centre.

Hanrahan said: “I had a late return to the season, but you want game time straight away. It’s an awkward one, the coach is saying everyone else is doing a good job and you have to be patient, do as well as you can in the first block of training, when you come off the bench, do well, when you get a start, take your chance.

“We have a big block of matches coming up and we’ll worry about Scarlets first.

“I know where I want to be but at the end of the day, it’s a team game and you have to fit into the team.”

Hanrahan insists all talk of the stunning victory over Leinster has been parked ahead of Friday night’s clash with the Scarlets at Thomond Park where Munster have lost twice this season.

“There is always pressure in Thomond Park, a fear factor I suppose of losing in front of your own fans.

“It’s a case of trying to turn that fear into a positive thing. You never want three losses at home in Munster. The Leinster game is now parked, it has to be with the group of teams we are playing next.

“It was great for us, put a bit of belief in the squad, prove to ourselves that we could do it and some fellas might have needed that. It was good for the coaches and the organisation as well and hopefully things will take off from that.”

Hanrahan agreed that watching Saturday’s night game with Leinster from the substitutes bench’ until he was introduced in the closing minutes had been tough. He also agreed that the desire to impress Ireland coach Joe Schmidt would be a motivating factor for several squad members over the key upcoming fixtures.

“Of course, everybody was itching on the sideline (against Leinster). Some were more eager than others. Some big decisions were made during the week and fellas wanted to really put a stamp on it, especially when you’re ahead by a few scores, you really want to get into a game like that.

“And then being under the cosh in the last twenty minutes, you want to be in there to try and save the team. One thing I’ve learned is that a game always looks harder on the sideline. Sometimes, there’s a bit of fear factor, that you wonder will I be able for it but at the same time you want to get on there. It was good to get in to a game like that and have a penalty that counts even though we were a good few scores ahead. It settled a few nerves because we had two sin bins and they were hammering our line.

“We went up there with a job to do. A lot of guys had things to prove in terms of Ireland shirts. Munster were once regarded as the best team in Ireland and that perception might be out there and with good reason because we haven’t been getting the results. It’s a stepping stone to where the organisation wants to go and how good we want to be.”

Growing up in Currow, Co Kerry, Hanrahan was well aware of the tradition the area boosted in terms of producing quality international rugby players, including the Doyle brothers and Mick Galwey.

“I was told growing up that Mick Galwey ate one turnip a day for the year and that’s what I tried to do but it didn’t work out very well. The family love it and go to the games. My dad lives in Scotland and so doesn’t get to make many games but he’s always in touch and watching on telly. My mother takes it in her stride, nothing fazes her.”