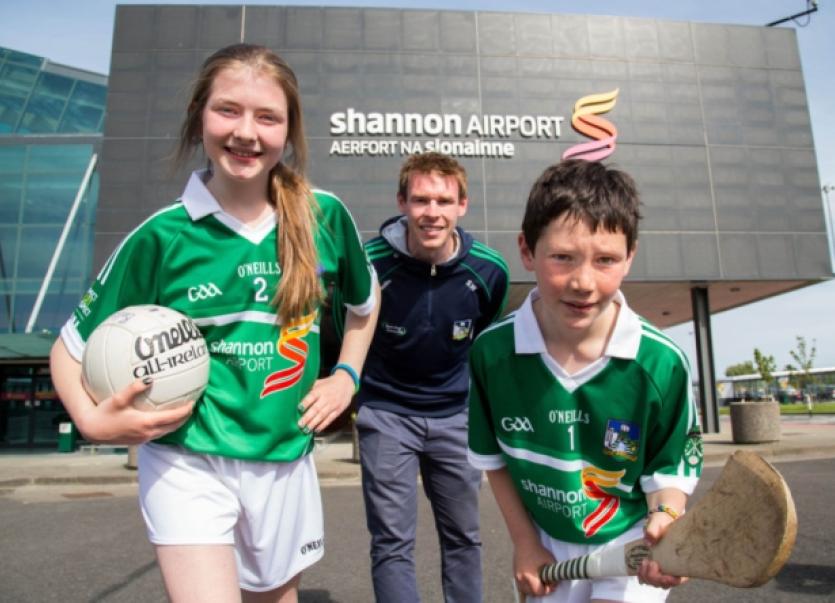 LEAGUE form will count for little in Sunday week’s Munster SHC clash between Limerick and Tipperary.

LEAGUE form will count for little in Sunday week’s Munster SHC clash between Limerick and Tipperary.

That’s according to Limerick defender Stephen Walsh, who this week launched the new sponsors of the Primary Go Games - Shannon Airport.

For the fourth successive season Walsh and his Limerick team-mates attempt make little of the gap in standard between Division One and Two of the National Hurling League.

While Limerick failed to win promotion and suffered a heavy quarter-final loss to Galway, Tipperary only missed out on league glory after a thrilling extra time loss to Kilkenny in the final.

“No one really thinks about what happened in the league when they run out the tunnel for a championship match,” explained Walsh.

“I know people say the league is important and it is for bringing in new talent and getting a team together but championship is different. The pace quickens, everyone has to be at their best so there is a difference for sure.”

The Glenroe man outlined that all focus is on defending the Munster title, with nothing distracting from opponents Tipperary.

“We had a two week break for the club championships and just got back to it last week and had a tough week. We had a game on Monday night, training Tuesday night, game Thursday night another game at the weekend so everything is focussed towards June 1,” said Walsh.

“Some people are writing us off. It depends on which section of the media you read or listen to. From our own perspective, you just can’t focus on what’s being said or written. We just have to focus on ourselves inwardly, on what we are doing as a group. We do put a lot of pressure on ourselves to perform and do well and aside from that, we would hope to put in a good performance on June 1.”

The departure of Donal O’Grady won’t be an issue either, according to Walsh.

“What happened happened. What’s done is done and it’s over. From the players’ perspective we really haven’t had much time to dwell on it as we had a week’s training just before we broke up for club championship and are back full-on over the past week. We don’t have much time to be dwelling on it as you are just focussed on getting ready for the game. Our captain Donal O’Grady said it; it really hasn’t anything to do with the players.”

Walsh continued: “Whatever happened between county board and management happened. We have a job to do at the end of the day on June 1. We are the lads that are going to be taking to the field so we have to just drive on really. No one is going to be talking about this scenario after June 1. It will be all about the players. Right now for us, the focus is only on Tipperary and June 1 and nothing else,” he stressed.

The corner back believes that atoning for the 2013 All Ireland semi-final isn’t the main motivation.

“We were disappointed when we sat down and looked at the All-Ireland semi-final. We didn’t do ourselves justice on the day but going forward this year you cannot be looking really that far ahead and say we are going to be playing in an All-Ireland final. It is all about the first game against Tipperary for us. Plus, we are Munster champions and that means a lot to us. We want to defend our crown and put up a good performance.”

Sunday week will be the third successive year that the Munster rivals in the opening game of the provincial championship.

“It’s a traditional rivalry between Tipp and Limerick and it is special but it really exists between every team in Munster. The way it’s gone in the last few years there’s no more than a puck of the ball between any of the teams, which is great for the fans and also the players because you know when you go into a match you have to perform otherwise you won’t succeed. Last year was a good game in the Gaelic Grounds between ourselves and Tipp. We can be guaranteed we will be into a right battle when we go down to Thurles. It comes down to the little things. Small mistakes. A break of the ball. I know they are all clichés but that’s what it comes down to. Both teams are going there with a will to win. We have both probably trained as much as the other and put the hours into the field and gym sessions but it’s a case of who can keep their nerve for the last few minutes of the game” said Walsh.

TJ Ryan’s panel played two inter-county games in the past week as preparations wind down.

They report no injury worries after the hectic schedule of challenge games.

Last Sunday in Tullamore Limerick played Galway, who won by two points - 6-17 to 3-24. Last Thursday night in Abbeyleix Limerick and Dublin played out a 3-18 each draw.

A number of different permutations were looked at in the games by manager TJ Ryan and selectors Paul Beary, Mark Lyons and Davy Clarke.

One of those was the placing of Seamus Hickey at corner back. All Star Richie McCarthy wasn’t available for the Dublin game because of club commitments in the Premier IHC with Blackrock 24 hours later so Tom Condon was full back.

Against Galway, David Breen was tried at centre back. Captain Donal O’Grady as used at centre forward in both games.

Tipperary were also in challenge game action last weekend, when they drew 5-19 each with Wexford.