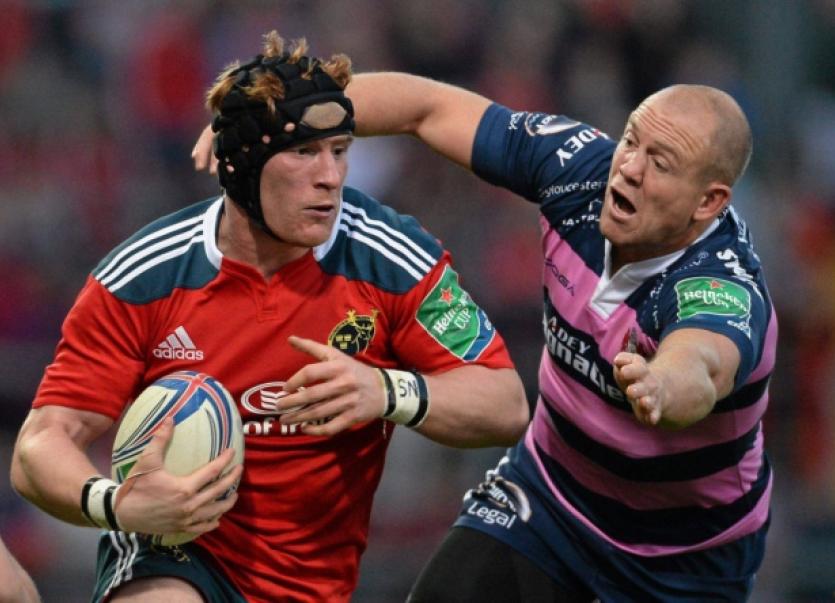 MUNSTER got their Heineken Cup campaign back on track with a hard-earned 26-10 win over Gloucester at Thomond Park on Saturday night. It may not have been the most convincing of displays, but the Heineken Cup is a results driven business in round two for any team which has lost its opening fixture.

MUNSTER got their Heineken Cup campaign back on track with a hard-earned 26-10 win over Gloucester at Thomond Park on Saturday night. It may not have been the most convincing of displays, but the Heineken Cup is a results driven business in round two for any team which has lost its opening fixture.

There are plenty of talking points from Saturday’s game and below are five of the key ones.

THE stark reality for the vast majority of Munster fans is that defeat to Gloucester on Saturday would have all but ended their interest in Munster’s season. That interest might only well be rekindled by Munster reaching the play-offs in the RaboDirect PRO12. The success of Munster’s season is defined by how the team performs in the Heineken Cup. Defeat at the weekend would have effectively ended the province’s prospects of making it through to the quarter-finals. Such a scenario at a time of the season when all the leaves have yet to fall from the trees would be unthinkable for Munster supporters as well as the players and management team. Saturday’s win provided a significant boost and sets up the back-to-back pool meetings with Perpignan very nicely.

ROB Penney: “I have been on the rollercoaster a lot during my career. It is never easy to manage your emotions and what I have been able to do over the period of time is - although I get disappointed and frustrated at times when you know the performance aren’t certainly where you want them to be - but you know there is a good one around the corner, I have a lot of faith in this group. We all have faith in this group. You don’t get too high when a good one comes, like the one against Leinster was good. I am not a hero that day and I’m not a villain when we lose to Edinburgh the next week. Neither are the boys, From me, as a coach, I can’t get into any of those wide spectrums because I will lose perspective. It wasn’t an easy week. It wasn’t an ideal week. It’s not what you want to be doing.”

THERE were many fans wondering why Munster’s versatile South African back-row forward CJ Stander wasn’t introduced into the fray at an earlier stage on Saturday night. Stander’s excellent ball-carrying skills could have added to Munster’s threat going forward.

Rob Penney revealed that Stander is likely to see more game time as the season progresses.

“CJ (Stander) will start to get a little more access . He has gone through a massive learning curve. I don’t know if anyone has spoken to him about the transition he has gone through coming to Ireland from where he has been. He is really starting to establish himself as a player. It is a different type of footie and it has taken him a bit of time to adjust. He is still young. He has been nurtured through and is starting to make a really nice impact.”

GLOUCESTER’S Director of Rugby, Nigel Davies insisted he was comfortable with his decision to make 12 changes in personnel from the side which defeated Perpignan in the opening round for the trip to Thomond Park. A few of the changes to the ‘cherry and whites’ starting line-up were enforced by injury, but the majority were by choice, a continuation of the club’s rotation policy. It seemed a strange call at the time as a win for Gloucester over Munster would have seen the visitors take control of Pool 6 after two rounds as well as ending the home side’s interest in the competition. No guarantee the West country side would have won at Thomond park even with their strongest XV in action, but they surely stood a better chance of making it two wins from two.

MUNSTER will have their second lunchtime kick-off in three Heineken Cup pool fixtures this season when USA Perpignan visit Thomond Park on Sunday, December 8. The fact that the first of the two back-to-back fixtures between Munster and the French Top 14 side takes place at home is a benefit to Munster for sure. Should Rob Penney’s men secure a win, then Perpignan will have lost two fixtures in the Pool ahead of their round four meeting at Stade Aime Giral a week later.

One issue of concern to Munster is that the Thomond park fixture has a 12.45pm kick-off on a Sunday, not normally regarded as the best for generating an intimidating atmosphere. The province will need to ensure they get their pre-match preparations spot on to ensure they are operating at full steam come kick-off time.