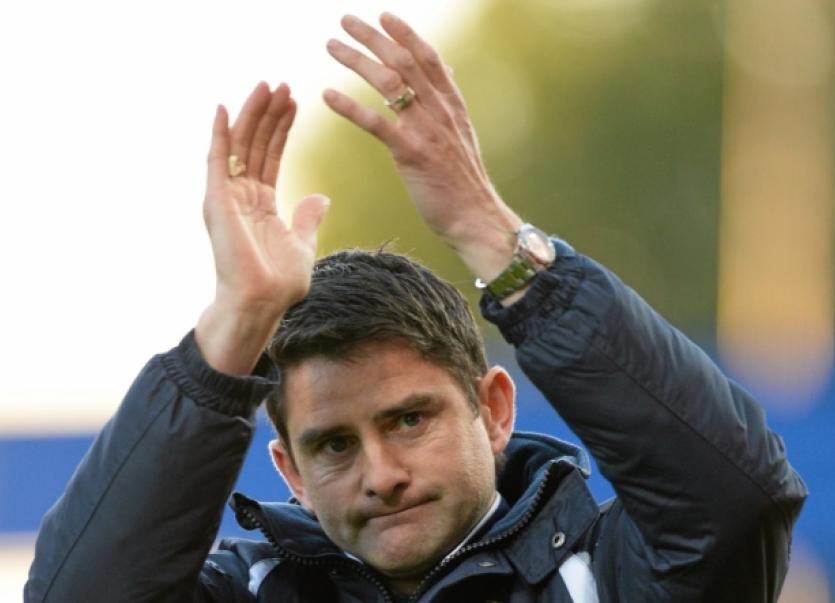 LIMERICK FC’s hopes of securing a sixth place finish in the Premier Division were shattered at the Brandywell this Friday night when Derry City recorded an emphatic 6-0 win over Stuart Taylor’s side.

LIMERICK FC’s hopes of securing a sixth place finish in the Premier Division were shattered at the Brandywell this Friday night when Derry City recorded an emphatic 6-0 win over Stuart Taylor’s side.

A combination of Limerick’s heavy defeat and Cork City’s 4-2 win over St Patrick’s Athletic ensured the Blues had to settle for a seventh place finish in the table on their return to the top flight for the first time in 19 years.

It was a disappointing end to the season for a Limerick side which had taken an excellent 13 points from a possible 18 in their six fixtures leading up to the Derry match.

Limerick trailed by just one goal at half-time, with Michael Rafter putting the home side in front on six minutes. However, the second period proved hugely disappointing for the visitors who leaked a further five goals.

Limerick started to get a foothold in the game after Rafter’s goal but Rory Gaffney’s left-footed strike whistled just past Gerard Doherty’s right hand post.

In stoppage time of the first half the Brandywell men should have extended their lead when David McDaid controlled Dean Jarvis’ cross inside the six yard box, but his low drive was kept out by Cusack’s legs.

McDaid did go one better on 47 minutes when he was first to react after Stephen Folan had cleared Patrick McEleney’s goal-bound effort off the line straight to the striker, and he had the easy task of side footing home from close range.

Just after the hour mark Derry added a third when Patterson’s cross found McDaid and he made no mistake blasting home from close range.

Jarvis added a fourth on 67 minutes after he made no mistake heading home Simon Madden’s high, looping cross.

McDaid completed his hat-trick on 70 minutes when some unselfish play from Patterson lead to the striker calmly side footing home from 12 yards, after Patterson’s cut-back had created the opening.

On 80 minutes Derry completed their rout when Madden superbly dinged the ball over the out-rushing Cusack, after Patrick McEleney’s inch perfect cross had created the opening.