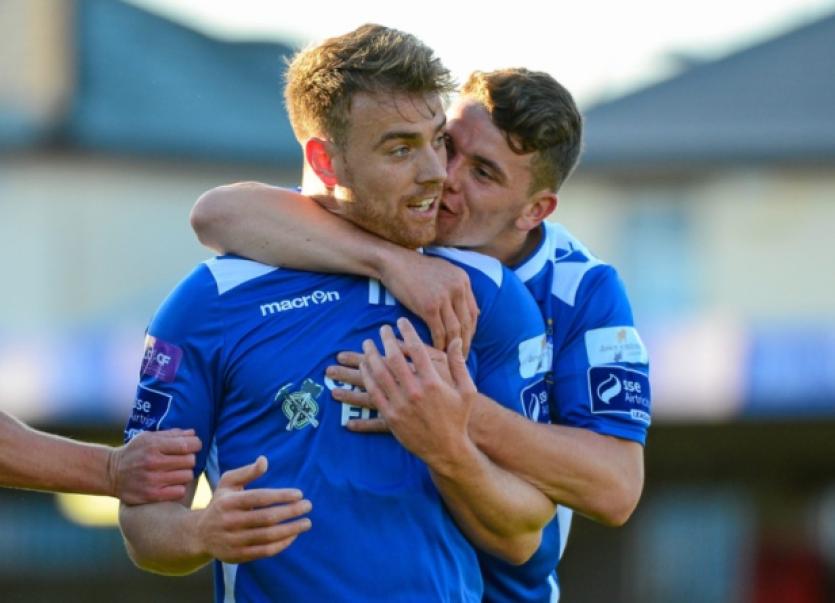 REJUVENATED Limerick FC boosted their survival hopes in the SSE Airtricity League Premier Division after scoring a thrilling 3-1 victory over Galway United at Eamonn Deacy Park on Friday night before an official attendance of 1,525.

REJUVENATED Limerick FC boosted their survival hopes in the SSE Airtricity League Premier Division after scoring a thrilling 3-1 victory over Galway United at Eamonn Deacy Park on Friday night before an official attendance of 1,525.

Up to 350 jubilant Limerick fans defiantly chanted ‘We are Staying Up’ at full-time as two goals from striker Vinny Faherty and one from Ian Turner helped the Blues secure three precious league points in their survival bid.

Limerick FC have now taken a magnificent 20 points from a possible 27 to boost their hopes of avoiding the drop with just three games to go.

Limerick missed a golden opportunity to take the lead inside 90 seconds when Galway keeper Conor Winn sliced his clearance straight to striker Faherty. However, Faherty was too casual in attempting to roll the ball into the empty net and Winn managed to recover and save his effort. The rebound fell to Lee J Lynch, but a poor first touch saw the chance spurned.

After Gary Shanahan had failed to convert a fine chance for Galway a few minutes later, Limerick went in front with a splendid solo goal from Faherty who pounced on a poor clearance from Galway defender Colm Horgan before gliding past the defender and sending a superb low shot into the bottom right corner of the bet.

Faherty missed a gilt-edged chance of making it 2-0 in the 20th minute when Lee J Lynch superbly crossed from the right, but the 28-year-old former Galway frontman shot side from a few yards out.

Limerick retained their 1-0 lead until half-time with Galway offering little threat in attack. However, the complexion of the game changed 15 minutes into the second half when Limerick failed to clear a corner kick and former Blues defender Samuel Oji headed home from close range.

However, the home side was on level terms for just seven minutes as Ian Turner grabbed a terrific lead goal for Limerick FC firing in from inside the area.

Limerick FC wrapped up the precious three points when turner set up Faherty for his second goal of the game and his 11th goal of the season.