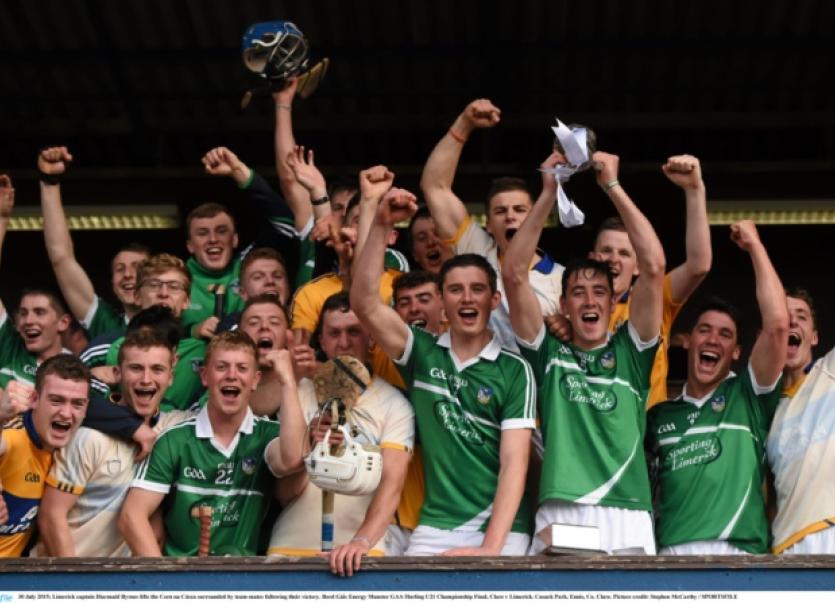 LIMERICK are Munster U-21 hurling champions after a 0-22 to 0-19 thrilling final victory over Clare this Thursday evening.

LIMERICK are Munster U-21 hurling champions after a 0-22 to 0-19 thrilling final victory over Clare this Thursday evening.

The frantic three points victory secures a seventh ever U-21 provincial title for Limerick.

The Cusack Park win ended Clare’s quest for a four-in-a-row and Limerick now progress to an August 22 All Ireland semi final against Galway.

Ronan Lynch was the Limerick scoring hero with 0-13 - three from play and the remainder from his great accuracy from placed balls.

It was a half that saw Limerick with the aid of the tricky breeze.

Clare had periods of dominance that returned four and five points in succession, while in the middle third of the 30-minutes, Limerick had a run of six points.

Clare hit the front first and were 0-4 to 0-2 ahead after seven minutes and that was after David Dempsey and Darragh O’Donovan had opened the scoring with back-to-back Limerick points.

From the eight to the 22nd minute Limerick dominated and were 0-8 to 0-4 clear with four points from Ronan Lynch placed balls and then scores from play from Robbie Hanley and Dempsey.

But Clare thundered back into the game after going 17-minutes without a score.

Cian Lynch levelled but it was Clare that went to the half time dressing room, two points to the good.

It was a half that saw Clare hit four wides and Limerick just two.

Clare went four points clear on the change of ends but back came Limerick and were 0-15 to 0-14 ahead after 12-minutes of the second half.

Then came a key run of scores from Colin Ryan, Tom Morrissey and Lynch to go 0-20 to 0-16 ahad with seven minutes to go.

Ian Galvin and Bobby Duggan hit back but Pat Ryan and sub Jack Kelleher had late Limerick scores for a famous win in front of 14,311 in Ennis.