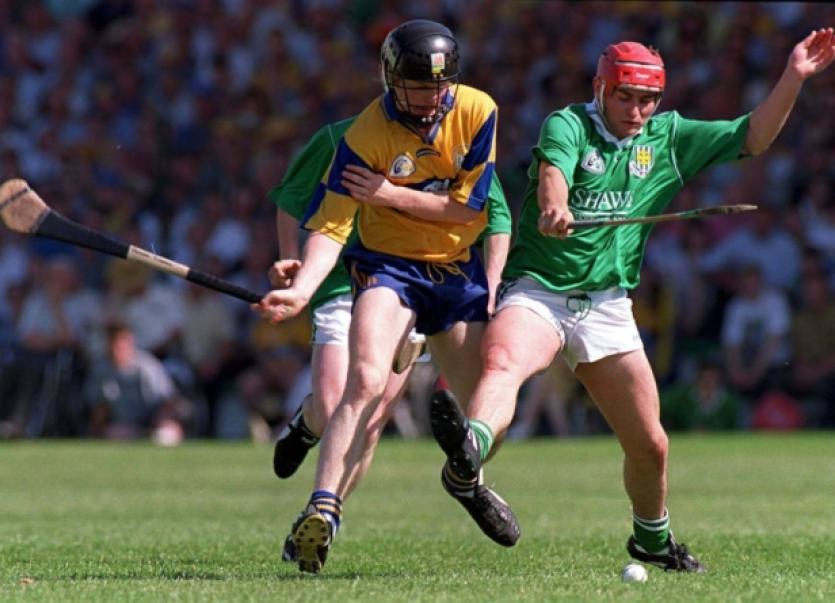 FROM the memorable classic in the Gaelic Grounds in 1996 to the Croke Park meltdown in 2013, Jerome O’Connell looks back on the recent Limerick-Clare clashes.

FROM the memorable classic in the Gaelic Grounds in 1996 to the Croke Park meltdown in 2013, Jerome O’Connell looks back on the recent Limerick-Clare clashes.

The ambush was complete.

Limerick supporters travelled to Croke Park in their thousands amid huge expectancy but returned with shattered dreams. On the back of a first Munster SHC since 1996, Limerick arrived in GAA Headquarters seeking a first All-Ireland final appearance since 2007.

Confidence was high with wins over Tipperary and Cork, but coming through the back door was an ever improving Clare that played five games to reach the All Ireland semi-final. From the off, Clare ran Limerick ragged. There was none of the assured play that captured the provincial final. Instead,they were jittery and looked nervous.

”You can use the excuse of the five weeks but no...it was worse before the Munster final. Understandably you might say that people were thinking ahead of themselves and saying the final would be a rematch with Cork and a song comes out but I think the players kept their distance from that so I wouldn’t use that as an excuse,” said captain Donal O’Grady afterwards.

For the first time since 1994 the Limerick senior hurlers have got three knockout championship wins in succession.

At the fifth time of asking this season, Limerick have won a Shannonside derby and are back in the All Ireland senior hurling championship quarter-final.

Defeats to Clare in the Waterford Crystal Cup and Allianz League were cast aside as Limerick demonstrated that the goals that followed against Laois and Antrim in the previous rounds have not dried up.

At the final whistle of this end-to-end, high octane, high tension knockout game the sides had shared 42 scores. Since last February John Allen has preached that his side needed to find a killer instinct and it was the three goals that proved the difference as Limerick took their tally to 17 goals in their three game unbeaten run.

“The second half we were heroic – I used the word against Tipp but again today there were fellas all over the field that worked like trojans and that’s what it came down to - we wanted it a bit more maybe,” said Limerick manager John Allen afterwards.

THIS Limerick five point defeat to Clare was down to the concession of four soft goals.

Facing a gale Limerick led 04 to 02 in the 14th minute when Brian Murray allowed a long range Pat Vaughan delivery to squirt by him. The second goal arrived 13 minutes later when Mark Foley and Seamus Hickey failed to gather possession and Jonathan Clancy raced in behind the Limerick cover to help himself to another goal. By the time the third goal arrived Limerick were within two points of the Banner ( 110 to 29) when Stephen Lucey and Seamus Hickey jumped for the same ball. The sliotar then broke to an unmarked Tony Carmody who drew Brian Murray before passing to Barry Nugent who made no mistake from close range. The fourth materialised three minutes later when Colin Lynch lobbed a hopeful ball toward Diarmuid McMahon on the edge of the square. McMahon, at his ease, caught the ball over Paudie O’Dwyer’s head before blasting another three pointer. All four Clare goals were avoidable, but symptomatic of Limerick’s poor general performance.

“Against the breeze we looked good and were 0-4 to 0-2 ahead and we conceded two very sloppy goals and then in the second half we brought them back to two points and with 15 minutes to go, we again conceded two more sloppy goals. We are very disappointed I can’t describe how I feel - we put an awful lot of work into this team and this game and nothing went right for us. I am not making excuses, the better team won on the day and that’s that,” said Bennis.

Limerick gained revenge on Clare for last year’s 17-point defeat in the qualifiers as they booked their place in the All-Ireland SHC semi-finals.

Andrew O’Shaughnessy was Limerick’s scoring hero with 0-11 as Richie Bennis’ side dominated long stretches of the Croke Park clash.

Clare were 0-11 to 0-07 behind at half-time and conceded a 38th-minute goal to Donie Ryan. A Diarmuid McMahon goal helped cut the gap to three points for the Banner but Limerick finished the better by scoring four of the game’s final five points.

Limerick, were forced to alter the team they selected during the week with Peter Lawlor falling victim to the ‘flu and Mark O’Riordan regaining his place at right half-back.

The tactic of directing diagonal balls into O’Shaughnessy in the right corner was Limerick’s favoured line of attack as the Kilmallock ace got the better of his marker.

Two minutes into the second half, Limerick grabbed their goal and it was an opportunistic strike from substitute Donie Ryan.

Not a good day at the office for Limerick hurling.

Having enjoyed a successful start to the season, qualified for the National League final, performed well against Kilkenny, a lot was expected from Limerick in the championship this year, both inside and outside the county.

But it wasn’t to be.

It started five weeks previous in Munster. It wasn’t just the four-point loss to Tipperary, it was the poor performance all round.

This game was a chance of redemption, and, according to retiring manager Joe McKenna, everything looked good in the build-up.

“Things couldn’t have been better in the camp ... The first two weeks after the match against Tipperary they were down, but we went away last weekend and it was very successful, they were really flying. We expected to beat Clare, but it just didn’t happen.”

Many will remember the game in Ennis for a host of Limerick changes. They had made four changes in personnel from the starting 15 for the Tipperary game, A late fifth change was enforced, with the loss through injury of captain and full-back TJ Ryan. Kieran Breen of Na Piarsaigh replaced the captain at full back. Among ten positional switches from the announced line-up, regular centre-back Brian Geary was shifted to centre-forward in a direct swap with Stephen Lucey.

Limerick conceded 2-7 in the first-half and the second half didn’t get another better.

A sweltering hot day in the Gaelic Grounds that will always be remembered for Ciaran Carey’s winning point to dethrone the All Ireland champions.

“We didn’t hurl as well as Clare but we never gave up. The heat was stifling - almost too much to bear - and it increased the pace of the ball,” gasped Limerick manager Tom Ryan after the epic win over Ger Loughnane’s side.

This week Cian Lynch, a nephew of Ciaran Carey’s bought a fresh perspective on one of hurling’s icon passages of play.

“Back in ’96, the mother always tells a great story, Ciaran got a point against Clare to win the match. I was only born in ’96 and I was on her breast and she threw me up. She forgot to catch me! I don’t remember that!” he joked to the gathered media at the launch of the All Ireland U-21 hurling championships.

“I have watched it over and over again. Micheal O Muircheartaigh’s commentary makes it. It’s brilliant,” said Lynch of his uncle’s point.