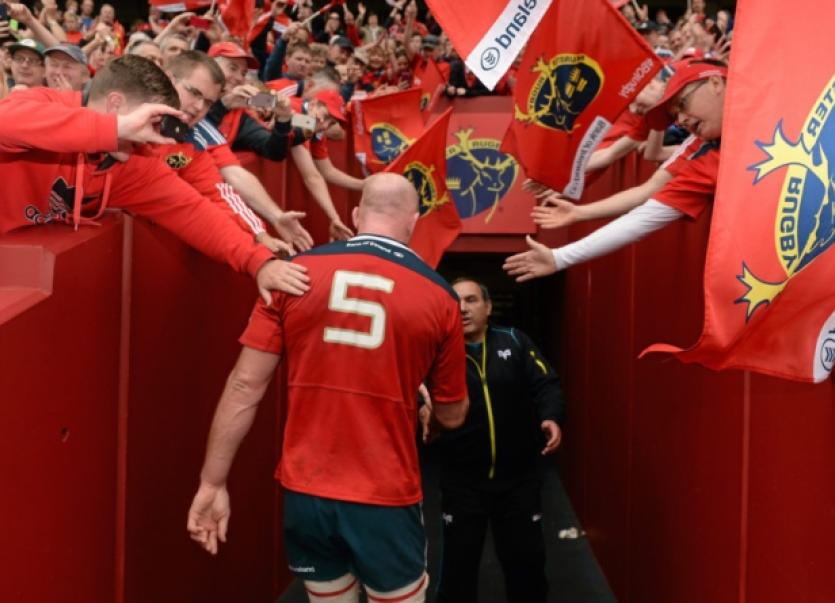 MUNSTER survived a late scare to secure a dramatic 21-18 Guinness PRO12 semi-final victory over the Ospreys before an official attendance of 16,158 at Thomond Park on Saturday.

MUNSTER survived a late scare to secure a dramatic 21-18 Guinness PRO12 semi-final victory over the Ospreys before an official attendance of 16,158 at Thomond Park on Saturday.

Munster were clinging to their three-point lead on the stroke of full-time when centre Josh Matavesi broke through with the final play of the game to seemingly clinch the game for Ospreys. However, match referee Nigel Owens refereed the passage of play to the TMO and scrum-half Rhys Webb was adjudged to have knocked-on at the breakdown to break Ospreys’ hearts and send Thomond Park wild with delight.

Munster will now face Glasgow in the PRO12 final at Kingspan Stadium on Saturday evening next at 6.30pm.

After the full-time whistle sounded the Munster players walked around the venue applauding their supporters on their final home appearance of the season. Second row Paul O’Connell was to the fore among that group of players, and the talismanic second-row admitted to Sky Sports later that he had ‘probably’ played his final game for the province at Thomond Park.

Munster should have killed off the Ospreys in the second half, twice opening up a 13-point lead.

Simon Zebo’s seventh try in eight PRO12 games put them 11-3 ahead at the interval and Denis Hurley and Paddy Butler both crossed in the third quarter.

However, Ian Keatley had a disappointing day with the boot, missing out on 12 points and being successful with just two of seven attempts.