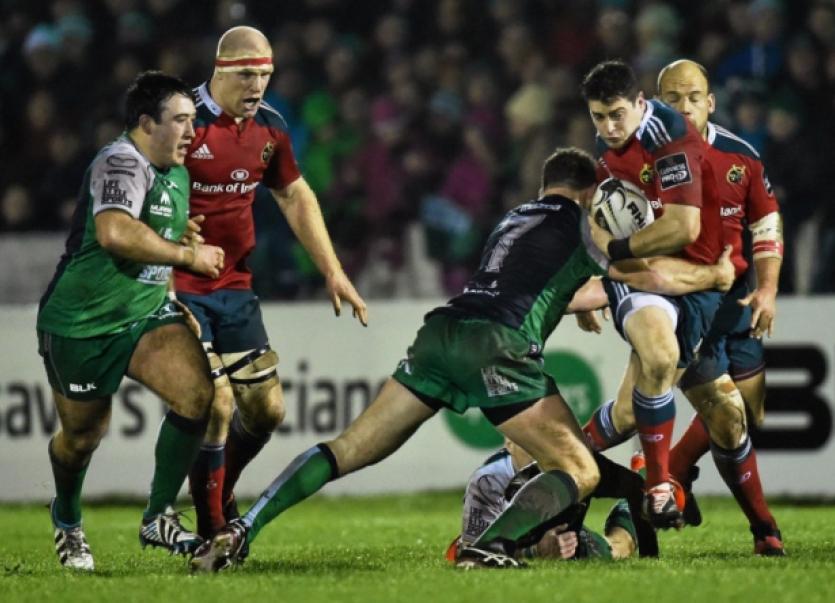 Colm Kinsella at The

MUNSTER head coach Anthony Foley believed the concession of a first half try to Kieran Marmion had proved crucial in their surprise Guinness PRO12 defeat to Connacht at the Sportsground on New Year’s Day.

MUNSTER head coach Anthony Foley believed the concession of a first half try to Kieran Marmion had proved crucial in their surprise Guinness PRO12 defeat to Connacht at the Sportsground on New Year’s Day.

Backed by a gale force wind in the first half, Munster needed to be well clear of their hosts at half-time in order to give themselves a fighting chance of retaining their unbeaten record against Irish sides in the PRO12 this season.

However, the concession of a brilliantly-executed Connacht try, scored by scrum-half Marmion on 32 minutes reduced Munster’s lead to just 9 points, 16-7 at half-time. Munster had been 13-0 ahead inside the opening quarter.

And Connacht produced a scintillating second half comeback, scoring two further tries, to record just their second win over Munster in their last 42 meetings. This was Munster’s fourth defeat in their last five games, a cause for concern with the make-or-break European Champions Cup clash with Saracens just two weeks away.

Anthony Foley said: “The seven points they scored in the first half made a big difference in the game. If we go in 16 points up at half-time they are questioning whether they can get back into it.

“In the second half we didn’t shift up the pitch. A couple of times we kicked out on the full. We didn’t turn them enough, didn’t asked questions of them enough in terms of possession. If we had shifted possession up, maintained it and kept them under pressure, line-outs were hard to win at times. I think they will probably end up with better stats than us out of the line-outs. That is another area we fell down on.

“Connacht were excellent. They took their opportunities. They hit lines. They cut us apart a couple of times. They will probably leave disappointed they didn’t get a bonus point out of the game. At one stage it was on the cards that it would be the likely outcome. I think our fellas dug in. We went up the field with five minutes to go to try and get a score, try and get us momentum for the last couple of minutes to try and win the game. But that didn’t happen either.”

Munster must now regroup and switch their focus to a Saturday, January 10 meeting with Zebre in the PRO12 at the Stadio XXV Aprile (3pm Irish time). That fixture will be Munster’s final outing before their crunch European Champions Cup clash with Saracens at the Allianz Arena a week later on Saturday, January 17.