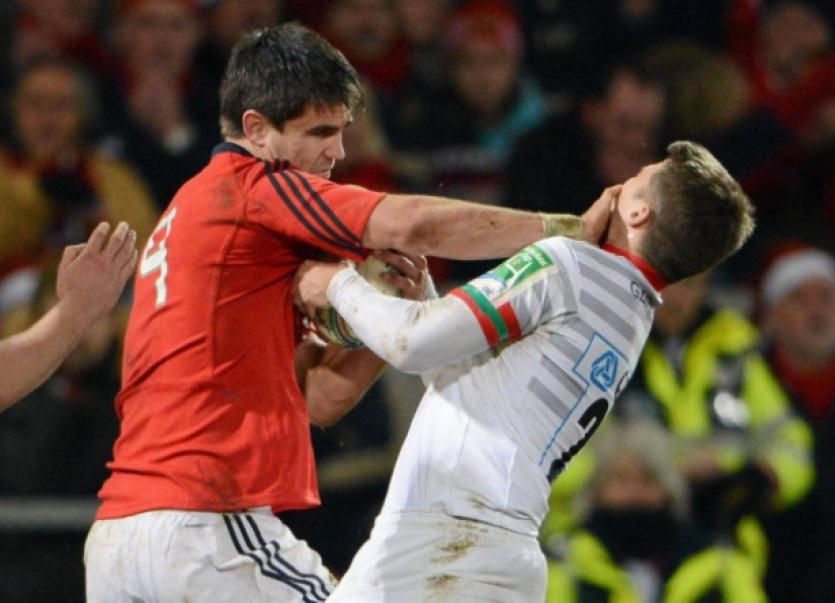 Aviva Premiership heavyweights Saracens - cutting a swagger as they descend on Limerick - to face Munster in a crucial European Cup tie under Thomond Park’s floodlights. They don’t get much bigger.

The bookies may have installed Munster as odds-on favourites at 4/7 to prevail against Pool 1 tabletoppers, Sarries, who can be backed at 7/5 to prevail.

Munster’s odds look a tad short,it has to be said, even allowing for the likely improvement in display from last Saturday’s last gasp victory over Sale Sharks at AJ Bell Stadium.

Munster’s success in Salford was the only away win in the 10 European Champions Cup pool games played last weekend and Anthony Foley’s men will hope that statistic hasn’t doubled to two following their mammoth home tie against Sarries this Friday night.

A win for Munster would set Foley’s men up very nicely for their back-to-back meetings with French Top 14 leaders Clermont Auvergne in December.

However, should Saracens defy the bookies’ odds and emerge victorious on Friday night, then Mark McCall’s side would be in the driving seat in Pool 1 with back-to-back games against Sale Sharks to come for them in December.

THE departures of both James Downey and Casey Laulala during the summer left Munster’s midfield options open this term.

After the impressive showing of Denis Hurley and Andrew Smith in Munster’s excellent win over Leinster earlier this month, the debate over the province’s best midfield combinations looked to be put to bed.

However, the partnership endured a difficult opening half defensively against the Sale midfield pairing of Johnny Leota and Sam Tuitupou last weekend and it will be fascinating to see whether coach Foley is tempted to make any chance this time round.

With the attacking threat Saracens pose trough their midfield and back three, whatever midfield pairing Foley deploys will need to be at their defensive best this Friday.

BATTLE OF THE NUMBER 8’S

PERHAPS the most fascinating of all the personal duels in Friday night’s game at Thomond Park will be the battle of the respective number eights, CJ Stander for Munster and Billy Vunipola, for the Londoners.

Both players have been in sensational form this season

The marauding Stander continued his excellent form from the opening weeks of the PRO12 season into last weekend’s European win over Sale Sharks.

Stander was the only player to make over 100 metres in carries in last weekend’s Champions Cup games, carrying the ball for 105 metres in all.

The South African can do untold damage with ball in hand, but his set-piece and defensive displays have improved significantly too.

England number eight Billy Vunipola was a huge force for Sarries in their excellent win over Clermont. What a prospect we have in story on Friday night.

FOR the second week running Munster’s European Champions Cup game will be refereed by a French official.

This week, the experienced Jerome Garces will take charge of the round two clash with Sarries at Thomond Park.

Munster head coach Anthony Foley was clearly not happy with some of the calls that went against his team at the breakdown, both by the original match referee who got injured and later by the stand-in referee in the immediate aftermath of the game. However, Foley accepted this week that the staying legal at the breakdown was an area Munster players needed to improve on too.

Foley said: “You’d hope for better from our players, first and foremost that is what we can control, we’ll get our point across to the officials they’re not out there to do malice to anyone.

HOW MUCH IMPROVEMENT DO MUNSTER NEED TO MAKE?

MUNSTER captain Peter O’Mahony said he felt Munster needed to improve by between 20-30% on their display last weekend to stand a chance of recording a fifth European Cup win over Sarries in six meetings.

O’Mahony said: “There (Sarries) are a hugely impressive team. It doesn’t matter where they are going or who they are playing, they would be looking to come and win.

“I think an important thing for us is this week is to really look after ourselves and look after what we can control. We need to up our performance by 20-30% against a team of this calibre.

“They are a fairly complete team to be fair to them. I think they score a lot off counter attack. They are very dangerous. I don’t think we can kick loose to them.

SEVERAL of the 11 Munster players included in the Irish squad for the autumn internationals will be anxious to impress Joe Schmidt in Friday’s glamour fixture. The likes of props Dave Kilcoyne and James Cronin, together with Simon Zebo, will be aiming to boost prospects of seeing gametime against Australia and South Africa.