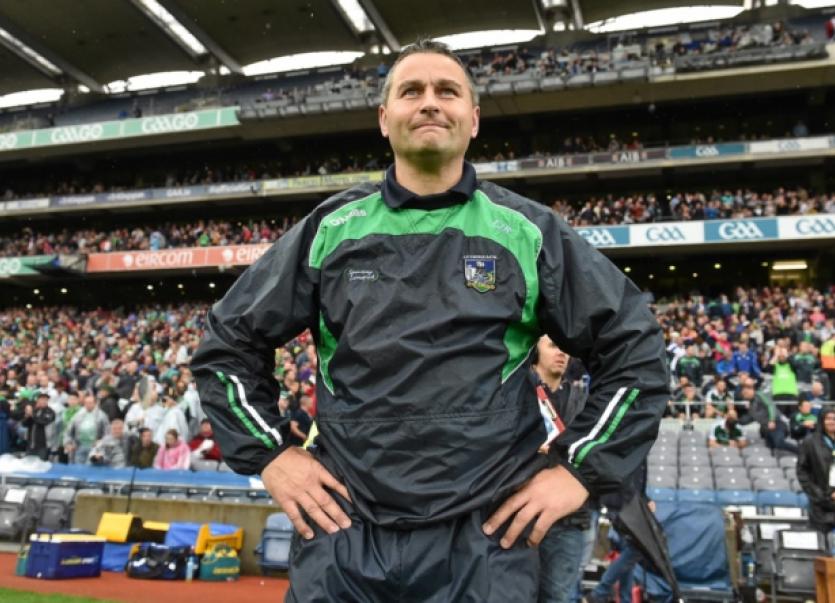 NOT surprisingly there were no dissenting voices as TJ Ryan was handed a new three year deal as Limerick hurling manager this Tuesday night.

NOT surprisingly there were no dissenting voices as TJ Ryan was handed a new three year deal as Limerick hurling manager this Tuesday night.

Limerick GAA officials took all by surprise at the August monthly meeting of the County Board when proposing the new term.

“It is our wish that there be no vacuum and we move forward united together - there is a good foundation and we just want to make sure that we build on that,” outlined Limerick GAA chairman Oliver Mann.

“I would like to thank everyone involved with Limerick senior hurling for giving us such a fantastic Summer. It ended a little bit sooner than we would have liked but that said all of Limerick GAA can hold their heads high with the pride of how we were represented in Croke Park by the lads who wore the green and white jersey. It was absolutely incredible on the day and that was only possible because of the dedication they have shown over the last number of years and months to get to the pitch they are at now,” said the Patrickswell man.

The chairman outlined how the opportunity to rubber-stamp to move quickly with the reappointment had only materialised hours before the meeting.

“Michael O’Riordan (secretary) and myself met with TJ today to discuss 2014 and also look forward to 2015 and beyond and as a result of our discussion with him we brought a report to management tonight - a meeting we had prior to this meeting - at which we recommended and management accepted that TJ Ryan and his management team be appointed for a three year term as Limerick senior hurling manager with a yearly review,” outlined Mann.

He added: “I know that we are tied with a regulation, which says that appointments must be sent out to clubs for 48-hours notice but it is the view of management that maybe this committee might wave that tonight”.

Pallasgreen’s David McGuinness and Sean Roche of Newcastle West queried if they had the “mandate” of their clubs to vote on the proposal but soon nine different clubs had spoken in favour of voting on the new term.

“I think supporters would look very poorly on us - they won’t thank us if we leave this standing in limbo,” stressed Claughaun’s John O’Brien.

“The lesson we should have learned from last Sunday it that we should have Limerick people in charge of county teams and I think everybody here should support the motion,” said the former County Board officer.

Croom’s Seamus Toomey proposed the regulation be wavered and this was seconded by Pat Murnane of Camogue Rovers - there was no opposition.

In the end there was no need for an actual vote on the new three year term for TJ Ryan and his management with no counter proposal.

Pat Murnane proposed the new term and it was seconded by Garryspillane chairman Jim Dooley.

“He didn’t have time to talk to all his management but practically 100% of his management will be available to him in 2015,” reported Oliver Mann of TJ Ryan’s back room set-up.

Tuesday’s County Board meeting also included a brief review of the 2014 season for the county’s hurling side.

“Everyone will agree they gave an outstanding performance and represented the county with real pride and did themselves and their families justice,” he said.

He outlined that the Limerick senior hurling panel had 175 training sessions enroute to Croke Park last Sunday - 110 were pitch based, while 65 were in gyms.

The secretary also revealed initial figures relating to the cost of preparing the team.

“A rough estimate on figures is that it is costing €3,000 per session over the course of the year, which works out roughly at about €600,000 for the year for the senior hurling team. We would like to thank JP McManus and his family for their continued support of the team, Cavanaghs of Charleville who provide the kit van, Uisce who provide the water, Lucozade who provide the energy drinks and O’Neills who provide the gear,” outlined O’Riordan.

“Looking at all the various county teams Limerick has the tightest and smallest back room team - there are nine with those for hurleys, Liaison Officer, van driver, masseurs, physio, team doctor and nutritionist - all very dedicated people.”

With club championship in the coming days manager TJ Ryan and selectors Paul Beary, Mark Lyons and Davy Clarke will begin the search for new talent.

Limerick are facing into a fifth successive season in the second tier of the National Hurling League next February.

Opposition will be provided by Waterford, Wexford, Offaly, Antrim and Laois.

Looking further down the line the draws for the 2015 Munster championship are no more than two months away.

What is certain is that Limerick would enjoy home advantage in the Gaelic Grounds in ties against Cork and Tipperary. Games against Clare or Waterford would more than likely be in Thurles.

At least by moving fast to copper-fasten the future of the current management team, Limerick GAA officials have provided a solid platform for preparations in the coming months.