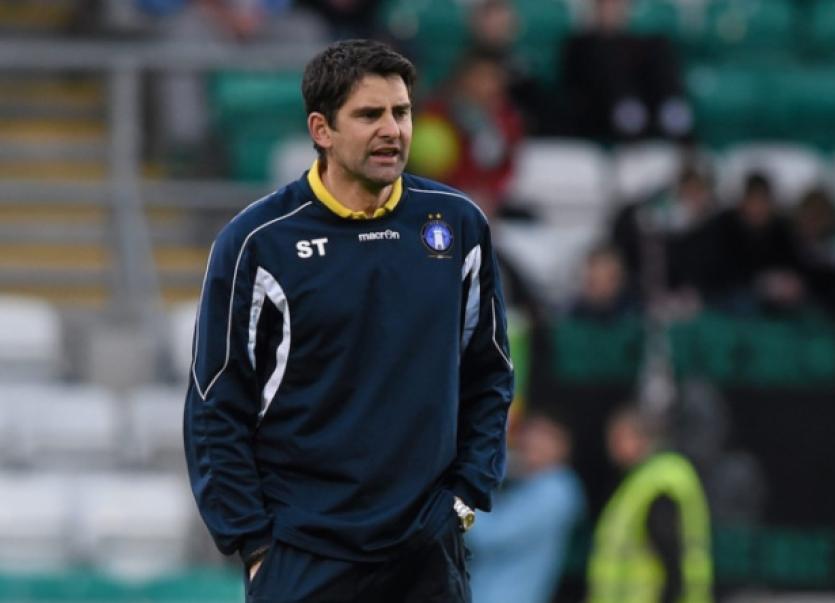 LIMERICK FC captain, Shane Duggan has described this Saturday night’s glamour FAI Ford Cup second round tie with Bohemians as ‘massive’ as it represents the Blues’ final chance of claiming silverware this season.

LIMERICK FC captain, Shane Duggan has described this Saturday night’s glamour FAI Ford Cup second round tie with Bohemians as ‘massive’ as it represents the Blues’ final chance of claiming silverware this season.

Resurgent Limerick host the Gypsies at Thomond Park (5.30pm) on the back of two excellent Premier Division league

wins which have seen the Shannonsiders rise up to sixth place in the top flight table.

And a second Limericke side, local junior club Ballynanty Rovers, will also be in the FAI Ford Cup second round action this weekend when they host Phoenix FC at the Fairgreen this Sunday at 2.30pm.

Balla’ will be looking to bounce back from their recent FAI Junior Cup final defeat to St Michael’s, of Tipperary, when they host the Leinster Senior League outift.

Shane Duggan’s father Ger was a member of Limerick’s 1982 FAI Cup-winning team which defeated Bohemians in the decider, thanks to Brendan Storan’s 34th-minute goal.

Indeed, Limerick also eliminated the Gypsies on the way to their only other triumph in the competition in 1971.

Twenty five-year-old Duggan said: “The FAI Cup is massive. It’s a pathway for Europe as well if you win the Cup. It’s the biggest domestic Cup in Ireland.

It would be great to get a good, run in it. It is going to be a tough game on Saturday night. As I said with the confidence the guys are showing now and the football we are playing, we are more than capable of going through to the next round.

“Bohs are a tough team to play against. Owen Heary has them well organised. They have a good reputation in the League. We are expecting another tough game on Saturday. It’s a massive game because we all want to win silverware this year. The League is probably out of our hands now.

It is important that we get a good Cup run under our belts and I feel the more than capable of winning on Saturday night.

“We have to take Saturday’s game first and then concentrate on the UCD game in the Premier Division the following weekend. We are starting to play the teams around us now and it is very important we pick up the wins against them, push up the table and push away from them.”