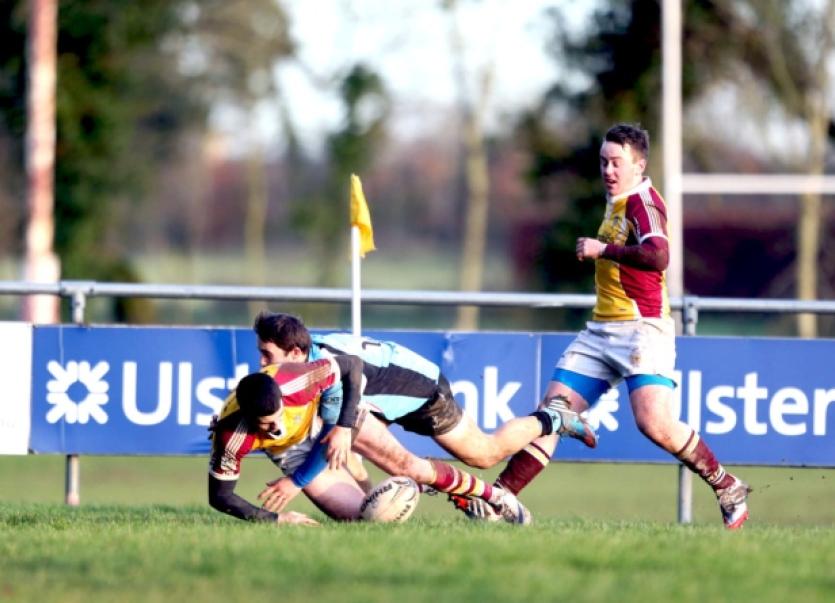 RICHMOND bucked the trend on an overall disappointing day for Limerick clubs in AIL Divisions 2A and 2B by providing the only local victory from four fixtures.

RICHMOND bucked the trend on an overall disappointing day for Limerick clubs in AIL Divisions 2A and 2B by providing the only local victory from four fixtures.

Promoted Richmond jumped up to 10th place in the Division 2B with a hard-earned 22-16 bonus point success against Ards at Richmond Park.

There was disappointment for the other local side in 2B, Thomond, who slipped to fourth place on the back of a 5-13 defeat away to Skerries.

Limerick’s two representatives in Division 2A both lost, but in contrasting manners.

While Old Crescent were frustratingly edged out, 12-13, by Highfield at Rosbrien, Bruff remain rooted to the foot of the 2A table after a heavy 48-20 defeat to table topping Galwegians at Kilballyowen Park.

Old Crescent lost out to an injury time penalty at home to fellow strugglers Highfield, Crescent, who led 12-10, at half-time had tries from Alan Bennie and Shane Mullally, while Kevin meade kicked a conversion. Crescent now sit third-from-bottom in the table.

Thomond will feel a degree of frustration having suffered just their second defeat of their campaign away to Skerries.

Thomond led 5-3 at half-time, thanks to Darragh Payne’s try. However, Skerries added eight points in the second half, while the ‘royal blues’ failed to score and so missed out on a losing bonus point. Despite this defeat, fourth-placed Thomond remain very much in the promotion race, with the top two sides gaining automatic promotion to 2A at the end of the season and the third-placed side facing a promotion play-off. Thomond host second-placed Greystones in their next AIL fixture on Saturday week.

Richmond will be relieved to have recorded their third win of the campaign, as the victory sees the Canal Bank side pull nicely clear of the relegation zone. Ger Meehan scored two tries for a Richmond side which trailed by a point, 12-13, at half-time. Stephen Clancy and Eoin Hanley bagged Richmond’s remaining tries, while Dara Clancy kicked a conversion. Next up for Richmond is an away date with Munster rivals Sunday’s Well on Saturday, January 25.

Winless Bruff have a huge battle on their hands if they are to avoid dropping to 2B at the end of the season as they trail second-from-bottom Highfield by six points and Old Crescent by seven points. The South Limerick side were boosted by the appearance of former Munster, Shannon and Leinster back-row Stephen Keogh as a replacement during the game. ‘Wegians included Crescent College Comprehensive’s 2013 Munster Schools Senior Cup winner Jack Dinneen at number eight.