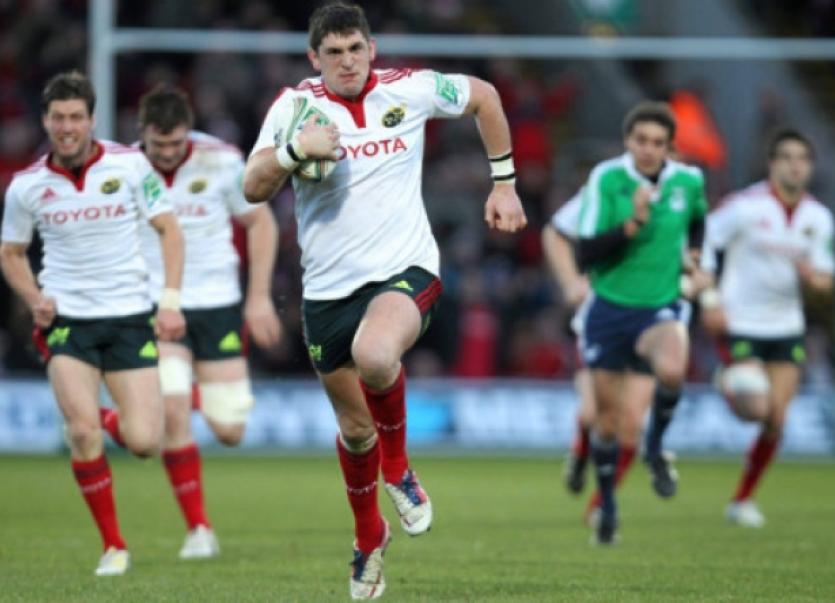 MUNSTER centre James Downey admits the challenge facing the squad is to maintain the high level of performance achieved in their stunning Heineken Cup quarter-final victory over Harlequins.

MUNSTER centre James Downey admits the challenge facing the squad is to maintain the high level of performance achieved in their stunning Heineken Cup quarter-final victory over Harlequins.

Rob Penneyâ€™s side face arch rivals Leinster in the RaboDirect PRO12 at Thomond Park this Saturday (6.30pm). While Munsterâ€™s hopes of making the play-offs in the PRO12 are all but gone, centre Downey says the province needs to back up their win in Europe with another big performance this weekend.

Downey, who produced one of his best displays yet for Munster on Sunday said: â€œI think we have just got to keep it going. We need a couple of back to backs.

â€œBefore we have beaten a team and then the next week we have not produced. We need a back to back performance and thatâ€™s what weâ€™ll be looking for this week. And no better game than Leinster to be honest. There is still one play-off spot up for grabs.â€

Downey said one of the key elements in Munsterâ€™s stirring display at The Stoop - just a week after the side had shipped more than 50 points against Glasgow in the PRO12 was trusting in their ability.

Downey revealed: â€œI think we came in last week after the Glasgow defeat and heads were down.

â€œWe had to group together and I think Munster do that very well.

â€œOur backs were against the wall. It was just us and playing an English team can obviously help things.

â€œWe got over there and said it is just us, there are a lot of doubters out there, but we know what we have been doing and we trust in everything.

â€œSundayâ€™s match was a great one to be involved in. Rog (Ronan Oâ€™Gara) and Paulie (Paul Oâ€™Connell) spoke to us afterwards and just said that is the way Munster are, the way they play, the Munster game. It was great to be part of it.

â€œI was happy enough with my own game. It went well. I got my hands on the ball early. I wanted to do that. I made some tackles. That is a big part of my game and I am glad it paid off.

â€œWe imposed ourselves physically on Harlequins and it paid off. We had to step up and increase the intensity.

â€œI think that was a full performance. It has been a long time coming but it is there. We knew it was there, all the players did. It is just about backing it up now, we really have to back it up this week.â€

Munster report no fresh injury concerns from the weekend win over â€˜Quins ahead of this weekendâ€™s clash with Leinster. However, Saturdayâ€™s inter-provincial clash may come a week too soon for winger Doug Howlett and Keith Earls who missed the win at The Stoop due to injury.