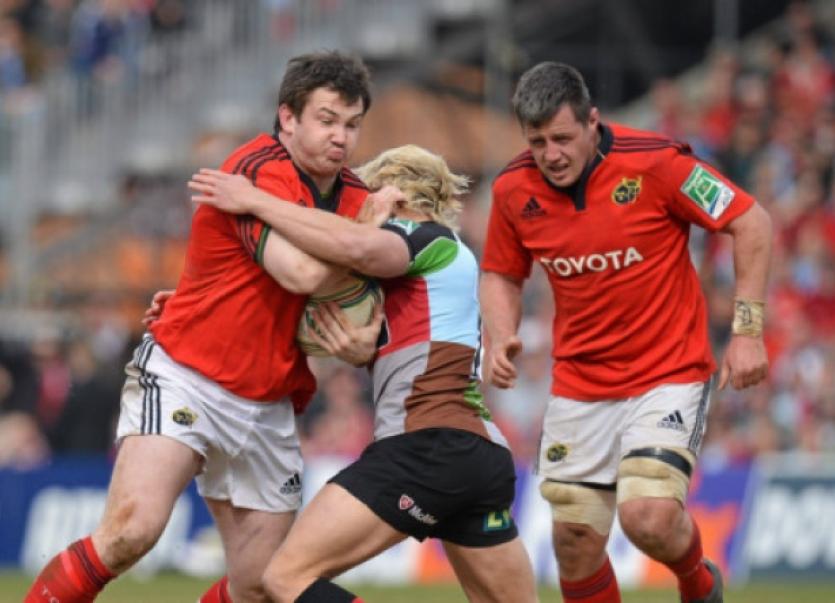 MUNSTERâ€™S Heienken Cup win over Harlequins has breathed new life into a season which was threatening to peter out. Limerick Leader rugby correspondent, Colm Kinsella looks at the impact the quarter-final success will have on Rob Penneyâ€™s squad.

MUNSTERâ€™S Heienken Cup win over Harlequins has breathed new life into a season which was threatening to peter out. Limerick Leader rugby correspondent, Colm Kinsella looks at the impact the quarter-final success will have on Rob Penneyâ€™s squad.

MUNSTER confounded their critics, many of their own supporters, the media and the bookies when recording a stunning Heineken Cup quarter-final victory over English champions Harlequins at The Stoop on Sunday. Now Rob Penneyâ€™s men are just 80 minutes away from a â€˜homeâ€™ final appearance against either Toulon or old rivals Saracens at the Aviva Stadium on Saturday, May.

Before then Munsterâ€™s focus will be on two RaboDirect PRO12 fixtures, a marquee home fixture with Leinster this Saturday at Thomond Park (6.30pm) and an away date with the Newport Gwent Dragons at Rodney Parade on the following Friday, April 19 at 7pm.

But with Munsterâ€™s prospects of making the top four in the PRO12 all but gone, the supporters focus will be on the marquee Heineken Cup semi-final clash at the end of the month.

THERE was an obvious shift in approach by Munster to Sundayâ€™s Heineken Cup clash with â€˜Quins compared to the fixture with Glasgow in the RaboDirect PRO12 a week earlier which had resulted in a heavy defeat.

Munster went back to the more direct approach which has served them so well for over a decade in the Heineken Cup. The pack bullied their opponents up front, bossing the collision area, with the back-row especially impressive.

The more direct approach also benefitted centre James Downey, who had his most effective game for Munster yet, carrying crash ball with telling effect.

The line-out proved a dependable source of quality possession, allowing Munster to build pressure and momentum.

Munster succeeded in suffocating their opponents and Ronan Oâ€™Garaâ€™s boot kept the scoreboard ticking over.

Whether such an approach will be sufficient to overcome the more formidable challenge of ASM Clermont Auvergne is another matter.

WHAT a season flanker Tommy Oâ€™Donnell has enjoyed! Oâ€™Donnell began the autumn lining out for UL-Bohs in the final of the Limerick Charity Cup. On Sunday, the 25-year-old played a starring role in Munsterâ€™s Heineken Cup quarter-final success over Harlequins.

Oâ€™Donnell had made just one start for Munster in the Heineken Cup prior to this season, but a consistent run of excellent form has seen the flanker force his way into Rob Penneyâ€™s starting line-up for the marquee fixtures. Indeed, Oâ€™Donnellâ€™s eye-catching run of displays resulted in him being called into the Irish training squad during the Six Nations Championship. He looks set to be involved with Ireland in this summerâ€™s tour to America and Canada.

LEINSTERâ€™S Heineken Cup heroics of recent seasons has seen Munster fall down the pecking order of Europeâ€™s top sides. And Ulster, who beat Munster at the last eight stage last season on route to the final, have been on the rise in recent seasons.

It is important for Munster to be involved at the business end of Europeâ€™s premier club rugby competition, not just in terms of the financial benefits that accrue as a result, but also in terms of remaining an attractive place to play for any overseas players the province may be chasing over the next couple of seasons. Players are always attracted by the opportunity to win silverware.

ONE wonders what impact Sundayâ€™s result, when the side was skippered by Paul Oâ€™Connell in the absence of the injured Doug Howlett, will have on the issue of captain for next season.

Howlett has been a magnificent signing for Munster, but the question of whether someone playing on thew wing is best-placed to captain a side remains.

ONE of the knock-on effects of Munster reaching the last four of the Heineken Cup is the likely increase in representation in the Lions squad to tour Australia this summer the province will enjoy.

Several Munster players put themselves in the shop window for inclusion, on the back of eye-catching displays on Sunday.

The fit-again Paul Oâ€™Connell looks certain to be included in Warren Gatlandâ€™s squad and may even captain the touring party.

Several more players will be hoping to convince Gatland to take them with big performances over the remainder of the season.

They include the likes of Conor Murray, Peter Oâ€™Mahony, Donnacha Ryan and Simon Zebo. Munster are unlikely to match their record of having eight Lions originally selected in 2009, but the province may well have a healthy contingent travelling Down Under.