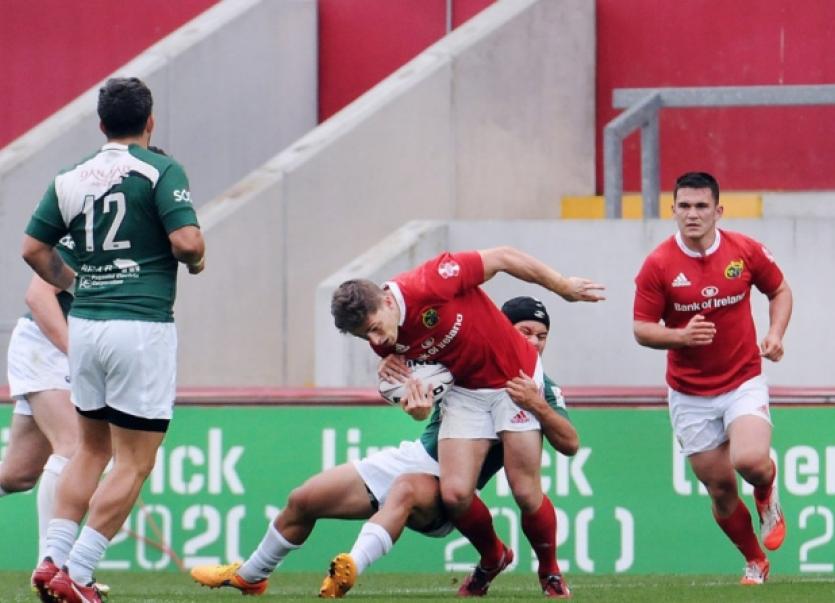 MUNSTER finished sixth at the 12-team Limerick World Club Se7ens at Thomond Park on Saturday after losing out to eventual winners Daveta Fiji at the quarter-final stage.

MUNSTER finished sixth at the 12-team Limerick World Club Se7ens at Thomond Park on Saturday after losing out to eventual winners Daveta Fiji at the quarter-final stage.

The Colm McMahon-coached Munster 7s side Munster later brushed off the Daveta Cup quarter-final defeat to overcome New York 33-10 and reach the Plate final, much to the delight of a partisan home crowd.

A pair of Alan Bennie tries helped them into 19-7 lead over Buenos Aires in the Plate decider but the Argentines responded to triumph 43-19.

“The last match didn’t go to plan, we started well but they ended up coming back and beating us, which was disappointing but it was still a good experience,” Quinlan said.

“Hopefully we can build on it next year if we get another opportunity.

“Turning out at Thomond Park is always massive, it’s a lot of lads’ first time running out as well.

“I’m hoping to maybe get a shot with the Munster A’s this season and hopefully get my foot in the door with the seniors a bit but it’s just taking every week as it comes.”

“Most of the guys here, this was our first chance of playing 7s.

“We come from a union background, it’s a bit faster than what we’re used to. We took a bit of time to get up to speed in our first game, but found our feet after that.”

The Munster 7s squad featured a mix of academy, sub-academy and club talent in a side captained by academy player Alex Wootton, of Garryowen FC.

This was the first year that all four Irish provinces were involved in the competition and Connacht finished a creditable third at the festival of rugby, while Munster made it to the Plate final and Leinster beat Ulster in the Shield final.

Fijian side Daveta looked imperious all weekend and having brushed aside Munster in the quarter-finals, they beat Connacht in the last four before holding off a second-half comeback from invitational touring side Samurai 7s in the final to prevail 19-17.