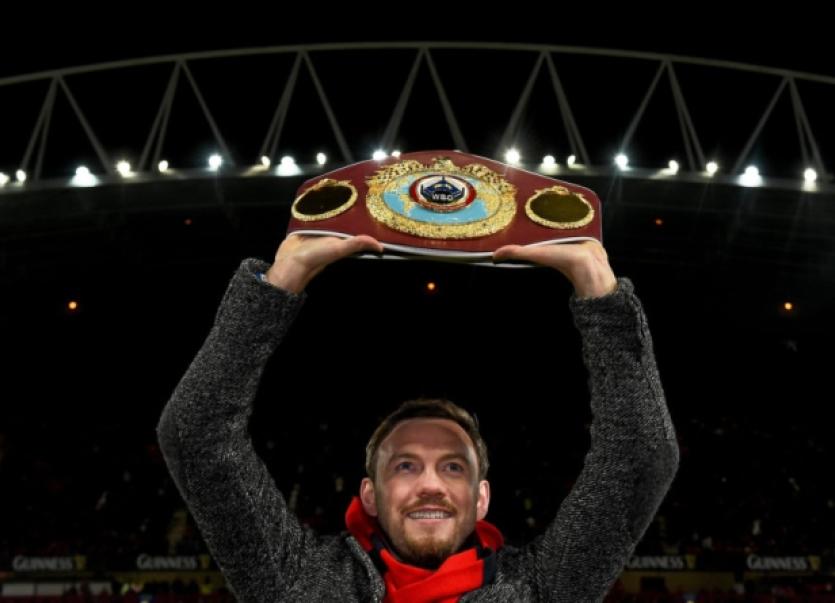 ANDY Lee will live out his dream on September 19 when he defends his WBO middleweight title in Limerick.

ANDY Lee will live out his dream on September 19 when he defends his WBO middleweight title in Limerick.

The former St Francis Boxing Club Olympian turned down the lure of bigger money in London for the “once in a lifetime opportunity” to fight in Limerick as World Champion.

Details of tickets prizes and sales are yet to be finalised.

There will be at least an eight fight undercard and there will be live television coverage of the event but it could be on subscription channel, Box Nation.

“My coach Adam Booth has been working with Frank Warren and the father of Billy Joe Saunders to arrange this fight. I was always pushing for the fight in Thomond and they’ve put together a deal and the fight will go ahead on September 19,” confirmed Lee over the weekend

“It’s great for me, it’s great for Limerick and it will be great for Ireland. It’s a serious fight, on paper it’s a 50-50 fight. This is a big event. I don’t want a mis-match of a fight. This will be a world class fight,” explained Lee.

The outdoor event will attract about 30,000 fans to home of Munster rugby for the Saturday night event that will rival previous stadium boxing events like Muhammad Ali and Al ‘Blue’ Lewis in Dublin’s Croke Park in 1972 and Steve Collins and Chris Eubank in Cork’s Pairc Ui Chaoimh in 1995.

“Thomond Park have been very accommodating and wanted the fight there,” revealed Lee.

Saunders and his promoter Frank Warren were pushing for London’s Upton Park, the grounds of Premier League soccer side West Ham but Lee and manager/coach Adam Booth stood firm for Thomond Park.

The September bout will be the sixth time that Lee has boxed professionally in Limerick.

The last of his five fights on Shannonside was in May 2010 when he defeated Mamadou Thiam.

All previous fights took place in the UL Sports Arena in front of approximately 3,000 supporters.

Lee has boxed 27 times since turning pro under Eamnnuel Steward in March 2006. He was 14 fights unbeaten when he fought first in Limerick in Febraury 2008 against Alejandro Falliga.

He then suffered the first of just two pro defeats to Brian Vera but returned to Limerick in July 2008 to get back on track with a win over Wilie Gibbs.

Last December, Lee beat Matt Korobov for the vacant WBO title and was last in action in April when he drew with American Peter Quillin. The fight was a non-title bout due to Quillin’s failure to make the weight and Lee suffered a shoulder injury that has kept him out of action since.

In September Lee will face 25 year old Saunders, who is undefeated after 21 pro-fights and is the British, Commonwealth and European champion after edging a split decision over fellow Englishman Chris Eubank Jr last November

“I have no problem travelling to Ireland. Like Andy Lee, I come from a traveller background and would have fans showing up in their thousands. Andy Lee is strong and game but he’s been on the floor in his last three fights and is coming to the end. He’s at a point where he’s cashing in and I don’t blame him for that but I’m too fresh for him,” said Saunders on Saturday.

“His luck has got to run out some time and I’m the man to take his title. He’s got a lot of miles on the clock, unlike, say, Golovkin, who is still young and fresh as a champion. Andy Lee is a tough fella and he isn’t beat until the final bell. He’s also a gentleman but this is a sport and I want that belt. Whether it takes one round or 12, I will definitely be world champion when it’s over,” said Saunders.