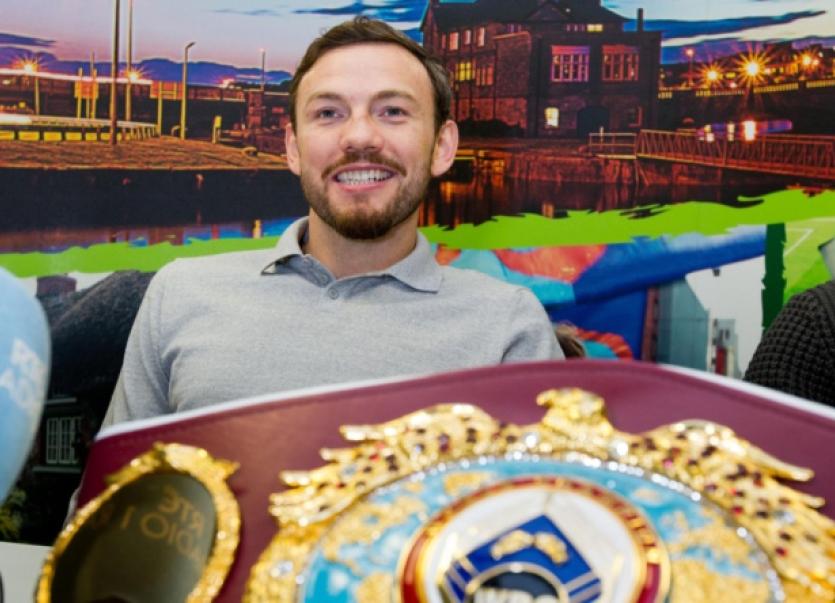 ANDY Lee was never going to take the easy option when defending his world title.

It’s just not in his psyche.

His journey to WBO middleweight champion was built on hard work and true to form, Lee hasn’t turned his back on the foundations of his success.

The Castleconnell man could have appeased fans and brought a “lesser opponent” to Dublin or indeed Limerick.

He could have chased quick money and opted to go direct to Billy Joe Saunders as the mandatory challenger.

But Lee opted for hard work...... The biggest challenge he could have found.

In the early hours of this Sunday morning (Irish time) the Limerick man steps into the ring in the Barclays Center in Brooklyn, New York to face former WBO champion Peter ‘Kid Chocolate’ Quillin.

But Lee arrives into his third world title fight in the shape of his life.

Last Thursday the 30-year-old southpaw faced three different opponents over 14 rounds of sparring and then on Saturday completed his 10-week training camp with 15 rounds of pad work with trainer Adam Booth.

“I had never done that before,” outlined Andy Lee to LeaderSport.

“I carried my fitness into the camp so it meant that I could do everything to a higher intensity. All has gone good - training was very good and I never really got out of shape because there wasn’t enough time, said Lee of the gap between his December 13 world title win and his January 12 return to full training.

“I think it was good that I was back so soon - I didn’t get out of shape or have enough time to think that I had become something or get comfortable. As a fighter you can’t get comfortable and think you have made it.”

He added: “Straight away I was thinking who can I get for the next fight. I left it mostly to Adam, although he ran everything by me. I could have taken a fight in Dublin but against a lesser opponent but when the fight with Quillin came along and it was too good to turn down - it’s in New York and on national television. It really was a no-brainer”.

The bookies price Lee as the outsider at 9/4.

“Of course it’s a risk but a calculated one,” accepts Lee.

“It’s a chance at the big time - to be considered among the elite fighters in the world,” he said with a giddy excitement.

“Myself, Quillin and Golovkin are the best three middleweights out there and all are very much at our peak - this is a big fight not just for me but for boxing. It’s pretty cool really - I’m Irish and flying out to Now York to defend my world title,”

“It’s mad!” he joked, reflecting on the magnitude of the weekend’s fight.

“I dreamed of being a world champion and now I want to be the best that I can be,” Lee declared confidently.

“Being a champion has improved me as a boxer. It was a big relief - it lifted a weight off my shoulders. Had I not done it I don’t know what would have happened and now I have a chance to show how good I actually am. I had two years of ups and down and not knowing if the chance would come or not and when it came I took the chance - it was a long time coming but it made it all worthwhile - had I lost that world title fight I would still have done amazing things in my life but this is what I dreamed of.”

He added: “I have become champion of the world”.

“He is an athletic boxer, who has good reflexes and decent speed but he is not as tested as I am. I have defeated better opponents and he has never fought anyone bigger than him or with a bigger reach than him. He is undefeated but I have learned so much from my defeats and they made me a better boxer.”

The confidence that comes with the world championship belt will be in the Lee corner.

“I am going there as a champion and that gives me an edge. He will have to be introduced first at all the events during the week and be first for the ring walk and that’s something he is not used to. I will be the one coming into the ring with the belt and the one taking it out as well,” he declared confidently.

Lee went down the road of pre fight predictions previously and all didn’t go according to plan so not surprisingly, he remains focued on just Quillin.

However, Limerick continues to pop into his mind.

“I have to beat Peter Quillin and not look beyond that but it is still a dream to defend world title in Thomond Park - that would be a special occasion and a special event. If I beat him I can pretty much call all the shots and make any decision I want but there are no guarantees and I have to beat Quillin first,” he said.

Lee flew direct from Nice to New York last weekend. On Monday he rang the bell to signal the close of the New York Stock Exchange and then on Tuesday had his first public workout and pre-fight press conference.

“I actually enjoy the last week - the work is done. I have some press conferences and promotion stuff and that can be a pain but I enjoy the weigh-in. I have enough people around me to say ‘no he won’t do that’. Adam knows if I need a rest and can act as the barrier. You really have to become selfish - a bit like any sportsperson, I guess.”

“Mentally I have to stay strong. When you are training, you are self consumed - day in and day out it’s about training, sleeping and eating. The last week is all a build-up to the fight and the enjoyable part is fighting. I think what is noticeable is the amount of people coming from home. They all want to meet me but I have to be selfish - there is no point putting yourself out and then afterwards wishing that I didn’t do that but everything is on que,” said Lee, a veteran of 36 professional fights since his debut On March 10, 2006 in Detroit.

This could be the biggest of them all.